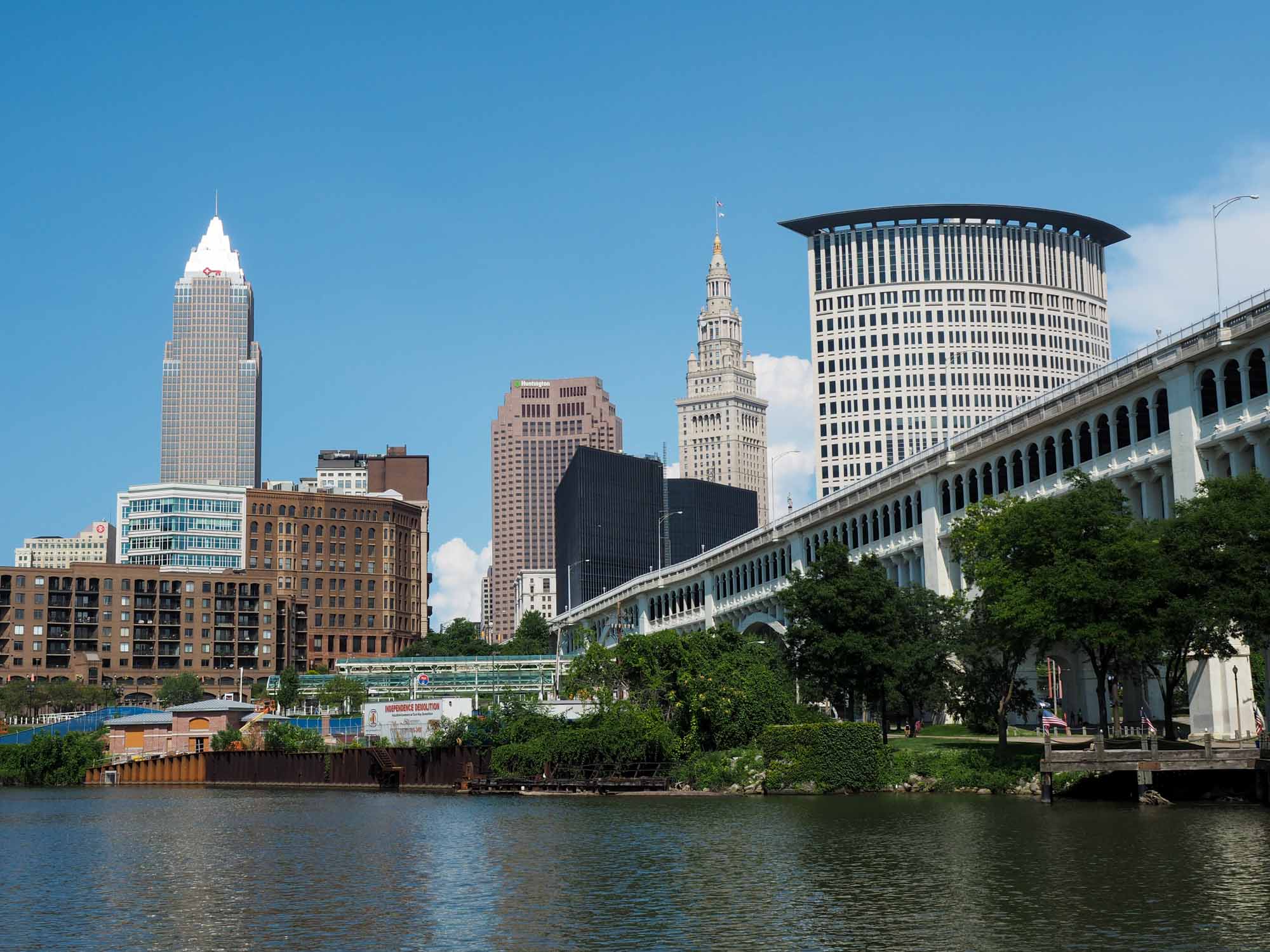 You may not think that “tourist” and “Cleveland” naturally go together. But hear me out before you click away from this post.

Cleveland has long been the butt of jokes; jokes about the Cuyahoga River catching on fire, jokes about mob ties and corrupt politicians; jokes about how it seems like the Universe has been working against Cleveland sports teams for decades.

And, while Cleveland is just now starting to dig itself out of the economic downturn that hit all of the Rust Belt cities hard in the 1980s, it’s a much different city than the one most people continue to make fun of.

I’ve lived my whole life in northeast Ohio, the last 4 years in a quiet little suburb called Twinsburg. Downtown Cleveland is an easy 30-minute drive away, and I’ve found myself drawn there more and more lately to try new restaurants, go to events, and seek out things like cool architecture and street art.

I’ve always been an Ohio girl at heart, but now I consider myself a Cleveland girl, too.

Cleveland is one of many Midwestern cities that I think are grossly overlooked and underrated by the tourism industry – so I’m here now to (hopefully) help you fall in love with Cleveland, too. (Or, at the very least, come and visit sometime!)

In this post, I want to highlight some of my favorite neighborhoods in Cleveland. The city has more than three dozen different neighborhoods, but some are better-suited to living than visiting. So here are the top 5 neighborhoods that I think are worth visiting if you’re in Cleveland as a tourist.

5 of the Best Cleveland Neighborhoods to Visit

Known for: Food and beer

If you ask me about my favorite neighborhood in Cleveland, it’s probably going to be Ohio City. It’s a very hipster-feeling neighborhood in terms of vibe, though the neighborhood itself has lots of history (and lots of beautiful old homes that I’m constantly dreaming of buying and renovating).

Ohio City is located just west of downtown across the Cuyahoga River, and used to be a completely separate city. Now, it’s one of Cleveland’s oldest neighborhoods.

Things to see in Ohio City

West Side Market – You can’t miss West Side Market in Ohio City – like, literally, the brick building with its clock tower commands the eye when you drive down W. 25th Street. The market is Cleveland’s oldest indoor-outdoor market, dating back to 1912. It has more than 100 vendors selling everything from meat to fruits to cheeses, with some of the stands having been here for generations.

RELATED: The Ultimate Guide to the Best Cleveland Breweries and Beer

Street art/murals – Ohio City is one of my favorite neighborhoods in Cleveland for street art; you’ll find it all over, with a particularly large concentration around an area known as Hingetown.

Things to do in Ohio City

Take a food or beer tour – You can take a food tour of West Side Market, or a beer tour of Ohio City with Cleveland Brew Bus.

Check out some art – Head to Spaces Gallery or the Glass Bubble Project to find some non-mural art.

Tabletop – If board games are your thing, head to Cleveland’s first board game cafe, located right in the heart of Ohio City.

Where to eat in Ohio City

Ohio City has a TON of great restaurants to choose from; you could spend a week just in this neighborhood and still not run out of excellent places to eat. Some of my favorites include:

Parking: There’s a paid parking lot behind West Side Market, but you can also find free street parking on most side streets.

Known for: Theater and art

One of my newest go-tos when it comes to Cleveland neighborhoods is the Gordon Square Arts District (part of the Detroit-Shoreway neighborhood). This artsy West Side Cleveland neighborhood is going through a bit of a Renaissance of its own, and if its growth continues it may very well nudge out Ohio City as my favorite part of Cleveland.

Things to see in Gordon Square

See a show – Gordon Square is home to a variety of theaters. There’s the Capitol Theater that shows both first-run and indie films; Cleveland Public Theater with its 5 performance spaces; and Near West Theater, a volunteer community theater.

Check out some art – Being an arts district, there’s plenty of art to see in Gordon Square. There are a handful of new murals going up along Detroit Ave., and there are a smattering of galleries to visit, too. If you’re in town on the third Friday of the month, you can go to the monthly open house at 78th Street Studios, which is an old warehouse that’s been converted into artist studios.

RELATED: The Best Murals in Cleveland and Where to Find Them

Things to do in Gordon Square

Shop – There are quite a few cool shops in Gordon Square, including Fount (they craft leather bags right here in Cleveland), HausFrau (a record shop), and iLTHY (for your pop culture clothing needs).

Where to eat in Gordon Square

I can’t talk about Cleveland and not talk about its downtown area. The downtown core actually covers a few different neighborhoods, from The Flats to Playhouse Square to East 4th Street. But for brevity’s sake I’ll include all my favorite bits from all those neighborhoods here.

Things to see in downtown Cleveland

Public Square – Public Square was originally laid out by Cleveland founder Moses Cleaveland in 1796. It’s been updated a little bit since then (it underwent a huge makeover in 2016 before the Republican National Convention came to town), but still is the center of a lot of the action in the city. In the summer, enjoy the fountains and green space, and in the winter strap on some skates and go ice skating here.

Cool architecture – Along with the Rock Hall itself, you’ll find lots of other cool buildings downtown, too, from the art deco Terminal Tower to the Gothic-style Trinity Cathedral. And don’t forget to look INSIDE some of Cleveland’s downtown buildings. You’ll find architectural delights at The Arcade, Heinen’s (yes, inside a grocery store!), and the Cleveland Public Library.

RELATED: The Most Instagrammable Photo Spots in Cleveland, Ohio

Things to do in downtown Cleveland

See a show or game – Enjoy a theater or Broadway show at a theater in Playhouse Square, or catch a Cleveland sports team at Rocket Mortgage Fieldhouse, Progressive Field, or FirstEnergy Stadium.

Watch boats on the Cuyahoga – One of my favorite downtown spots is along the Cuyahoga River at Heritage Park. Not only does this spot in The Flats offer up some great views of the Cleveland skyline, but it’s also the perfect place to watch boats traverse the river. If you’re lucky, you might even get to see the Center Street Bridge swing out of the way of larger vessels.

Shop – There are some cool spots to shop downtown, including Small Box in the Warehouse District (housed in converted shipping containers), and the CLE Clothing Co. on East 4th St.

Where to eat downtown

East Fourth Street is currently at the heart of downtown Cleveland’s dining scene, so several of these spots can be found there!

Known for: Churches, food, and art

Located adjacent to Ohio City, Tremont is most recognizable for its tree-lined streets, Victorian homes, and large number of churches. It’s one of the oldest parts of Cleveland, and was at one time home to a large immigrant population. These days, Tremont is being revitalized through an influx of young professionals moving into the neighborhood.

Things to see in Tremont

A Christmas Story House & Museum – If you’re from the US, chances are you’ve seen “A Christmas Story” at least once (or, if you’re like me, at least once a year on Christmas Eve when TBS plays it for 24 hours straight). The house where the American cult classic was filmed is located in Tremont, and the inside looks exactly like it did during filming. Touring the house is fun.

Art – Tremont is quite an artsy neighborhood, too. You’ll find galleries and murals all over, with my (current) favorite being a new(er) one that went up in July 2018 on W. 14th Street.

Things to do in Tremont

Walkabout Tremont – On the second Friday of every month, you can enjoy Walkabout Tremont from 5-10 p.m. This community event “showcases the best of Tremont’s creative side,” featuring street performers, pop-up art, bar specials, and extended hours at galleries and shops.

Food tour – You can also go on a Tremont food tour.

Sip coffee with cats – Cleveland has its first cat cafe! It’s called affoGATO, and it’s a must for any cat-lover.

RELATED: The Cleveland Script Signs and Where to Find Them

Where to eat in Tremont

You can find everything in Tremont, from ethnic food to fine dining.

Known for: Museums and learning

Home to Case Western Reserve University and many of Cleveland’s museums, Universiry Circle is a very pretty neighborhood that I’ve found myself visiting a lot recently. You could easily spend a day or two just enjoying the museums in this part of the city, but there are some cool non-museum things to check out, too.

Things to do in University Circle

Things to see in University Circle

Wade Oval – Directly behind the Cleveland Museum of Art is a sculpture garden and green space with a pond in the middle. This is Wade Oval, and it’s a great place to enjoy the sunshine in Cleveland. In the spring, several dozen cherry blossom trees bloom here.

Cleveland Cultural Gardens – If *free* gardens are more your jam, hop on Martin Luther King Boulevard and head north through Rockefeller Park, where you can enjoy the Cleveland Cultural Gardens. This is a collection of more than 30 small gardens that are designed and cared for by different cultural/ethnic groups in Cleveland. This concept is totally unique, and I love the multiculturalism on display here.

Where to eat in University Circle

You’ll find a lot of college-student-friendly joints in University Circle, but also some other great spots to eat:

Where to stay in Cleveland

If you’re looking for a good place to stay in or near some of these neighborhoods, here are my top picks:

This is by no means an exhaustive list, so please forgive me if I’ve left out your favorite restaurant, point of interest, or even full neighborhood – there’s just no way to include everything.

But hopefully this 2500-word post will prove to non-Clevelanders that this city of ours is actually way cooler and more interesting than most people realize!

Who’s ready to come visit me in Cleveland now? Which Cleveland neighborhood would you most like to see?

Share on FacebookShare on TwitterShare on PinterestShare on Email 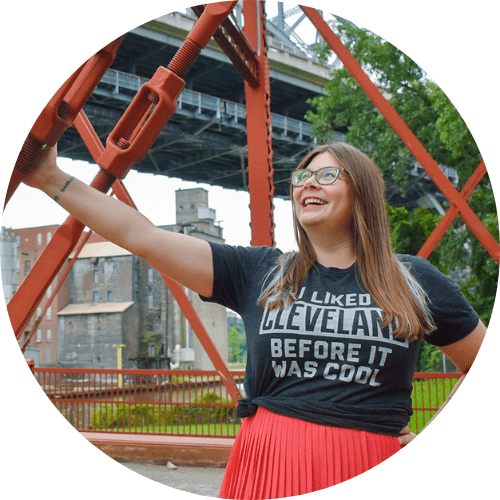