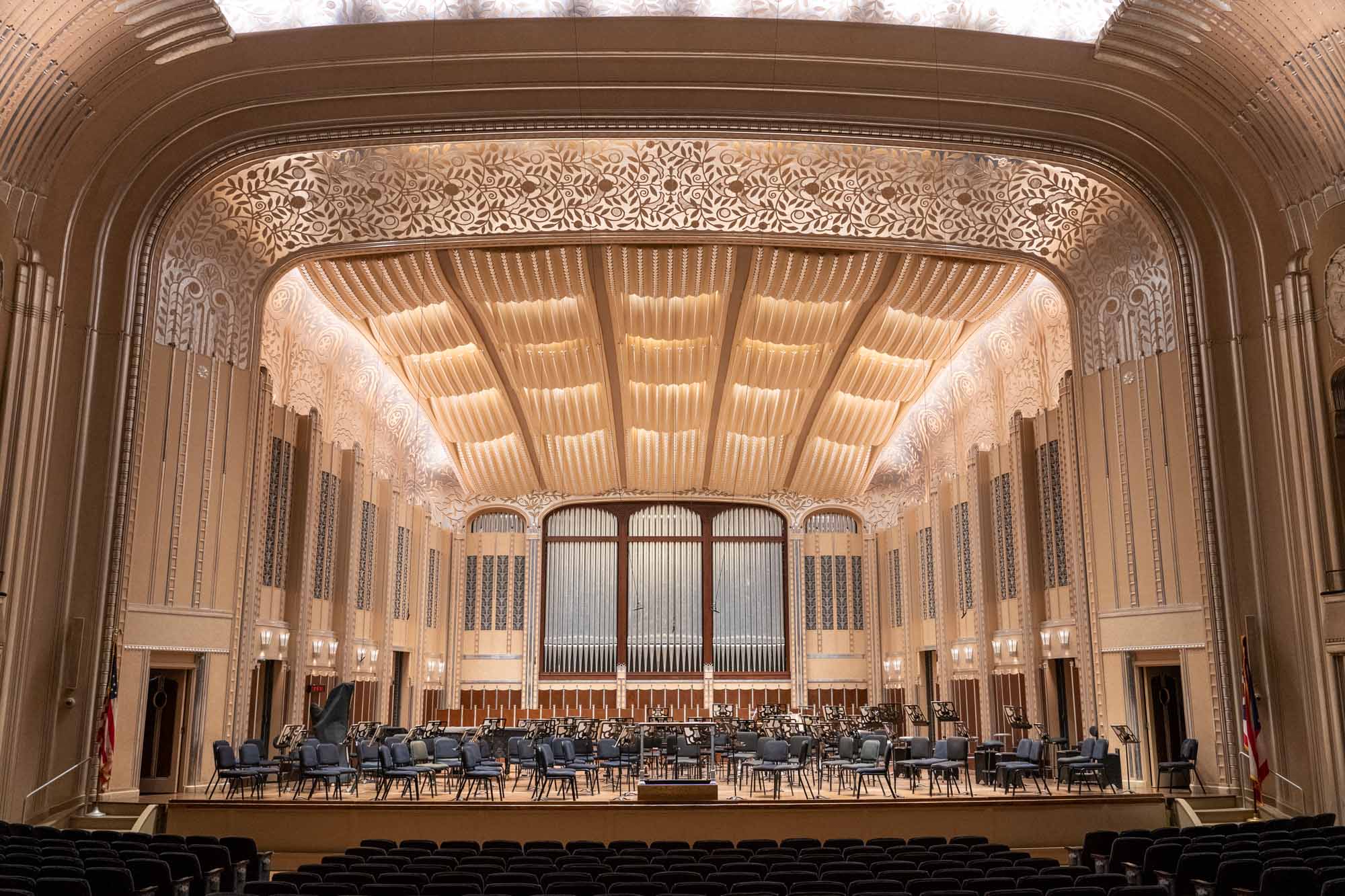 When people ask me about must-do things in Cleveland, I always tell them about our great museums like the Rock and Roll Hall of Fame and the Cleveland Museum of Art; shopping at West Side Market; drinking craft beer at a local brewery; and discovering incredible architecture downtown.

But another thing that I think should be on every Cleveland bucket list? Attending a Cleveland Orchestra performance.

The Cleveland Orchestra: A Quick History

The Cleveland Orchestra as a musical organization dates all the way back to 1918, when it was founded by Adella Prentiss Hughes, a local musician a promoter of the arts.

The Orchestra began performing in various spots around the city and touring the eastern USA with Nikolai Sokoloff as its principal conductor and Hughes as its manager. It wasn’t until about 10 years into its existence that Hughes began thinking about finding a permanent home for the Cleveland Orchestra.

In 1928, local businessman and patron of the arts John L. Severance (along with his wife, Elisabeth) pledged $1 million to building a proper concert hall for the orchestra. The announcement itself was a surprise, but what’s more astonishing is the fact that the project went forward despite the dive into Great Depression; Severance Hall was completed by early 1931.

Today, the Cleveland Orchestra performs at Severance Hall from fall through spring, and then moves to Blossom Music Center during the summer months.

The Cleveland Orchestra is regarded as one of the best orchestras in the United States – it’s part of the “Big Five,” the top American orchestras that include the likes of the New York Philharmonic and Boston Symphony Orchestra.

How lucky we are to have such an incredible group in Cleveland!

Because of its prominence in the orchestral world, the Cleveland Orchestra splits its time between concerts at home and touring all around the world. The Orchestra has recurring residencies at Vienna’s Musikverein, and makes regular appearances across Europe and the US.

So how can you properly “experience” the Cleveland Orchestra?

Did you know that Severance Hall offers free historical tours to the public roughly once per month?

It totally does, and this is an excellent way to learn more about the Cleveland Orchestra and it’s iconic Cleveland home.

John and Elisabeth Severance pledged that $1 million to build Severance Hall back in 1928, and Mrs. Severance was responsible for many of the design elements that you’ll still see today (including all the lotus flowers). Sadly, Elisabeth died early on in the project. Subsequently, Mr. Severance poured a lot more money into the building than originally planned in her honor (estimates are around $3 million, which today would be the equivalent of close to $50 million!).

A tour of Severance Hall will take you into the Reinberger Chamber Hall to see hand-painted murals; into the Grand Foyer to admire the red jasper marble columns and the unique Egyptian Revival-style architecture; into the Smith Lobby where you’ll learn about the original motor driveway; and of course into the main Concert Hall, which is one of the most famous (and most beautiful) in the world.

A Severance Hall tour will also allow you to see the Norton Memorial Organ and its 6000+ pipes behind the stage.

You can see when the next tours are on the Cleveland Orchestra’s Event Calendar. The tours are usually offered one day a month, with 2 or 3 one-hour-long tours offered on each public tour day. The tours are free, but you do need to reserve your spot on one by calling the ticket office at 216-231-1111.

Touring Severance Hall is fascinating, but of course you’ll want to see the Cleveland Orchestra perform, too!

Seeing the Orchestra perform at Severance Hall is a must-do at least once. The main Concert Hall underwent a major renovation from 1998-2000, which improved the acoustics (though didn’t much change the overall look of the hall). Thanks to this renovation in particular, there’s no bad seat in the house sound-wise, and the sound quality is on par with that of the best concert halls in the world.

Going to a performance at Severance Hall can make for a great upscale date night in Cleveland. You can grab dinner at the Severance Restaurant, or a drink at the Opus Lounge. Then you can admire the Grand Foyer and Smith Lobby before the show – and maybe catch a ride in one of the historic elevators that still carry patrons up to the upper levels of the Concert Hall.

And then enjoy a performance!

The Cleveland Orchestra performs a wide variety of music, with concerts to suit just about every type of audience.

Along with performing classical symphonies, the Cleveland Orchestra also brings in guest artists and conductors, puts on full operas, teams up with other groups like ballet companies, and sometimes even performs soundtracks live alongside a movie showing.

A few innovative concert series to know about include:

See the full Cleveland Orchestra schedule here, and learn more about some of its concert series here.

And, as a side note: there’s no dress code to attend a performance at Severance Hall. Most people do put nicer outfits on, but don’t feel like you need to dress in your best evening attire to hear the Orchestra.

During the summer months, the Cleveland Orchestra takes up residency at Blossom Music Center in Cuyahoga Falls. This is super unique, and another thing that makes this Orchestra one of the best in the nation.

The Orchestra performs a summer concert series at Blossom each year that includes a mixture of classical symphonies and more contemporary music, including usually a couple movie + music nights (in summer 2020, the Orchestra will be performing the music to Lord of the Rings: The Fellowship of the Ring and Harry Potter and the Chamber of Secrets live along with showings of the films).

The full Blossom Music Festival lineup will be released soon, but concerts generally occur on weekends from late June through Labor Day weekend.

At Blossom, you can either purchase assigned seating inside the pavilion, or buy cheaper lawn tickets, where seating is first-come, first-served (and you’ll need to bring your own chair or blanket). Lawn tickets for kids 17 and under are free with the purchase of a regular adult ticket for Cleveland Orchestra performances.

Learn more about seeing the Orchestra at Blossom here.

Have you heard the Cleveland Orchestra perform, or ever visited Severance Hall? 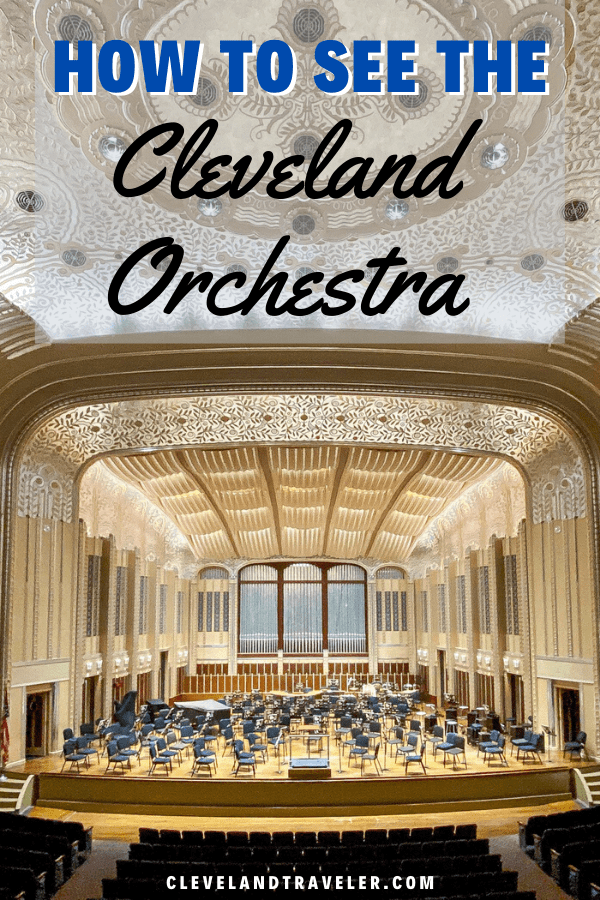