You’ve likely seen photos of them on social media, or maybe even seen a couple in-person: the now-iconic Cleveland script signs.

As part of a tourism push in 2016, three Cleveland script signs were installed around the city in some key locations that visitors were likely to find. The three original signs were so popular (with locals and visitors alike) that by the end of 2018, there were 6 of the photo-ready signs scattered throughout the city.

The Cleveland script signs are now a must-do for people visiting Cleveland. (I always take visitors to at least one Cleveland sign, if not more than one.)

But what if you want to tick all 6 script signs off your Cleveland bucket list? Here’s a short guide on where to find them all (ranked according to me!):

My favorite Cleveland script sign sits on the edge of Voinovich Bicentennial Park, directly across North Coast Harbor from the Rock and Roll Hall of Fame. This sign looks great at any time of day thanks to Cleveland’s skyline (and the Rock Hall) being directly in the background.

Where to park: There are several paid lots nearby, including ones along the E. 9th Street Pier, and on both North and South Marginal roads. There’s also a paid garage connected to the Great Lakes Science Center, and additional parking on the other side of North Coast Harbor.

Other things to do nearby: The Rock and Roll Hall of Fame, Great Lakes Science Center, and Public Square are all only a couple blocks away. You can also check out some of the architectural gems along Euclid Avenue, like The Arcade, the old Cleveland Trust Co. Building (which is now a Heinen’s grocery store), and the 5th Street Arcades.

RELATED: The Most Instagrammable Photo Spots in Cleveland

I feel like the Edgewater script sign is the most-photographed one. Which makes sense, considering its location overlooking Edgewater Park Beach and the Cleveland skyline. This sign is at the far western end of Edgewater Park, and makes a great backdrop for all sorts of photos.

Where to park: There’s free parking in two different lots near this location. There’s also free parking at the other end of Edgewater Park.

Other things to do nearby: If the weather’s nice, you can stroll over to Edgewater Park Beach, where there’s a place to grab snacks and drinks (including alcoholic ones). Not far away are also the Detroit-Shoreway and Gordon Square neighborhoods. Both of these have cool street art and some great restaurants (I personally really like Happy Dog, Toast, Banter, and Sweet Moses).

This is my second-favorite Cleveland script sign because of its location. It’s right on the Cuyahoga River on the West Bank of The Flats, with the Cleveland skyline (including a cool bridge) in the background. I’m really glad that The Foundry (a local rowing club) teamed up with Destination Cleveland to place this sign in 2018.

Where to park: The Foundry has its own parking lot, or there’s also street parking along Columbus Road.

Other things to do nearby: You’re right across the street from Brick And Barrel taproom and Rivergate Park.

Overlooking The Flats and several bridges that span the Cuyahoga River, the script sign on Abbey Avenue in Tremont also offers up some nice Cleveland skyline views. (Not *the best* Cleveland skyline views, but still some great ones – plus, you can sometimes see fireworks from Progressive Field here!) This sign is at an overlook that has some boards with info about the area and bridges.

Where to park: There’s a small (free) parking lot across the street from the sign underneath I-90 (corner of W 14th and Abbey Ave.).

Other things to do nearby: From this sign, you’re about equidistant from the heart of Ohio City (where you can visit the West Side Market and several craft breweries), and downtown Tremont (where there are good restaurants and small art galleries).

This is the only Cleveland script sign that’s truly on the East Side of Cleveland. It’s located at Euclid Beach Park, which is a lakeside park with a beach and a pier. It offers up yet another skyline view – though admittedly the skyline is pretty far away here!

A tip for finding this sign: It’s near the beach’s boat ramp; enter the park via Wildwood/Villa Angela Dr., and walk over a pedestrian bridge to the sign.

Other things to do nearby: Euclid Beach Park has a brand new pier, as well as a beach, a playground, and some grills. The park is also super close to the Waterloo Arts District, where you can find some neat murals.

The script sign at the Cleveland Hopkins airport could be the first sign that visitors to Cleveland will see – but you probably won’t go there to seek it out otherwise, which is why it comes in in last place on my list. (It also doesn’t have a pretty outdoor backdrop or anything.)

You’ll find this sign in the baggage claim area of the airport, all the way down by the restrooms at Carousel 1.

READ NEXT: 5 of the Best Cleveland Neighborhoods to Visit as a Tourist

Have you taken photos at any of the Cleveland script signs? 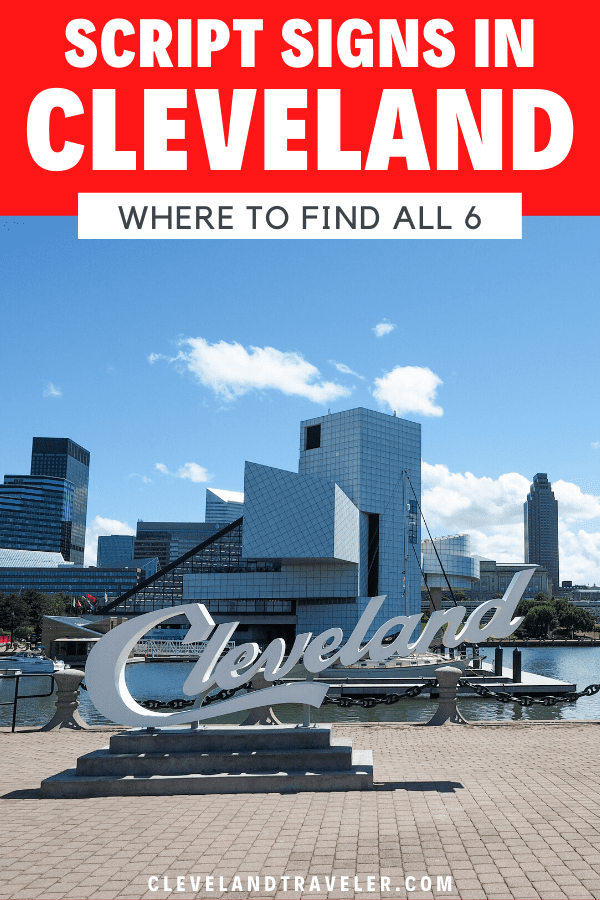