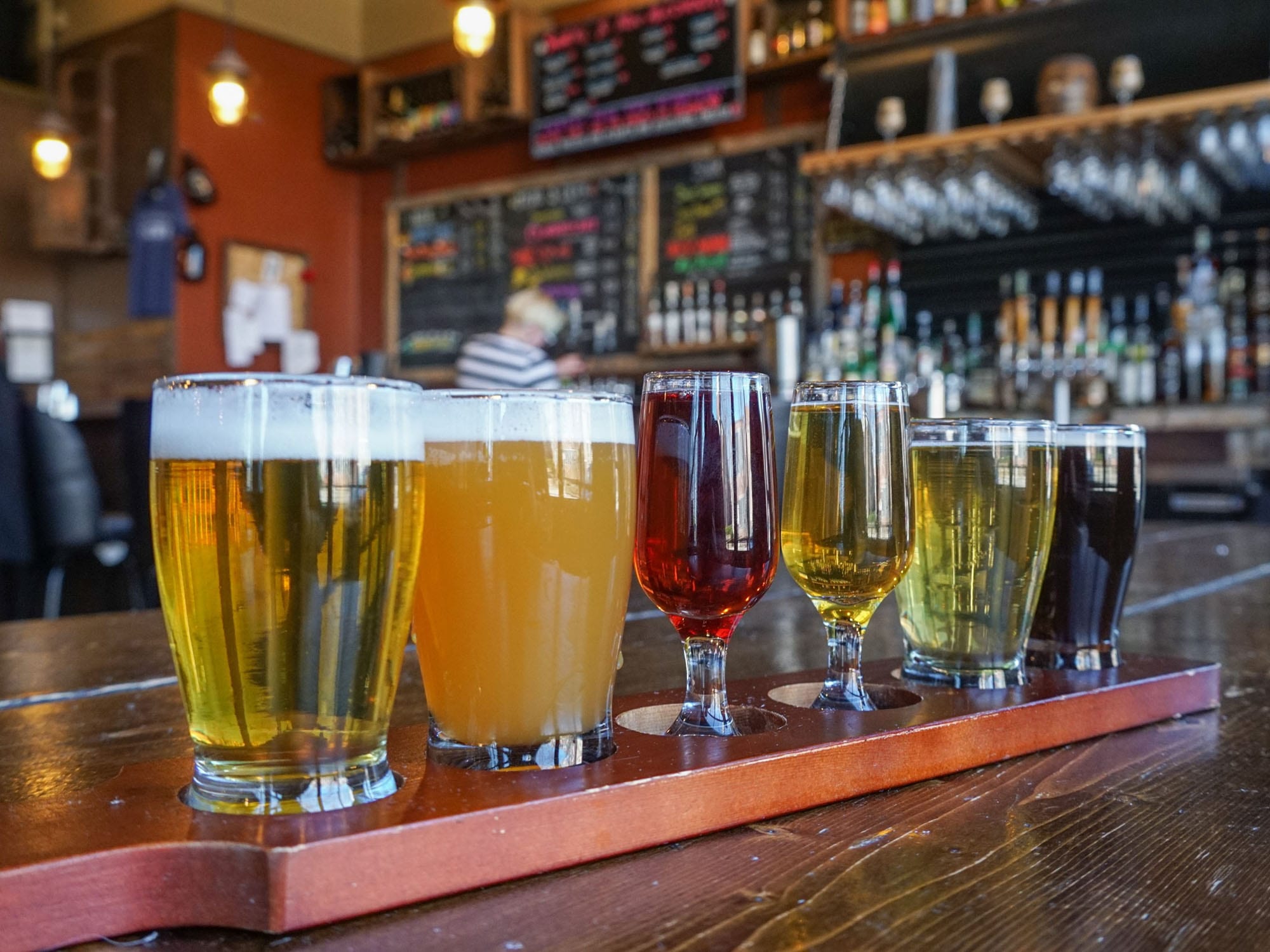 Cleveland is known for many things: our fierce loyalty to our sports teams; our location on Lake Erie; even some of our cool museums. But Cleveland should probably also be known for its growing beer scene.

Cleveland is full of amazing craft breweries, and a visit to the city wouldn’t be complete without checking out at least a few of them. Luckily for you, most are located within a short drive or walk from each other. (Cleveland isn’t *that* big, after all.)

So whether you want to create your own craft brewery crawl, or just want to sample a few beers, here are all the best breweries that Cleveland has to offer.

In 1986, back before craft brewing was cool, Great Lakes Brewing Company took up space in the old, rundown neighborhood of Ohio City. They brought business back to the neighborhood and paved the way for many breweries to come.

Founders Pat and Dan Conway were inspired by the beer they drank while traveling across Europe. They hired the master brewer and engineer from the last brewery in Cleveland that closed in the early 1980s, and it took off.

While they may be the OG craft brewery in Cleveland, they also serve up classic, Cleveland-themed beers like Burning River IPA (named after the famous Cuyahoga River catching on fire in the 1960s) and the Elliott Ness Amber Lager (named for the prohibition-agent-turned-safety-director in Cleveland).

And while you’re there, definitely check out their brewery tour. For $15, you get to see the ins and outs of the brewery on top of enjoying four 5 oz. samples of beer!

Definitely noteworthy, Masthead is perfect for watching any Cleveland sports team with friends on their many screens before ordering their delicious wood-fired pizza.

Pizza and beer belong together like peanut butter and jelly, so it just makes sense that they created delicious and chewy pizza to go with their many beers on tap. But our favorite thing isn’t just the pizza, the beer is pretty great, too, and also ever-rotating.

Not many people are willing to stand outside in freezing temperatures before noon on a Saturday for beer, but when people are waiting in a line so long that it wraps around the block, you know you’ve struck beer gold.

Masthead frequently releases new beers, and will celebrate with a giant can release party. And once it’s gone, it’s gone. So you want to get in quick and stock up on their latest on offer.

Come for the beers, stay for the tasty pizza creations.

This is the perfect brewery to visit after a day spent at Cleveland’s Edgewater Beach. If you want to catch a vastly underrated Lake Erie sunset, this is the place to do it. Terrestrial is located in Battery Park, just a quick walk from the beach.

Known for being dog-friendly, bring your pooch and sit on their patio while you enjoy the breeze and sip their latest beers. We love their Citropapotomus IPA, but whatever is currently in their infuser is always a good call, too. They’ll frequently infuse their classic beers with various fruits and other items to give it an even tastier finish.

This is the perfect spot to soak up Saturday afternoon sunshine and get your weekly dose of cute pups.

4. Butcher and the Brewer

Located on Cleveland’s bustling East 4th Street, the Butcher and the Brewer offers unique beers and incredible food. Many dishes are served small plate style, which allows you to pair their house-smoked corn dogs, dry-aged beef sliders, or smoked whole wings (they are a butcher shop, after all) with amazing beers like their Stop Hop Kaboom IPA or any of their hand-crafted cocktails.

This is the perfect place to go before a night out at the theatre at Playhouse Square, or before catching a baseball game at Progressive Field.

Located where the Cuyahoga River bends in the Flats, this scenic brewery has outdoor seating to enjoy the river views (it’s one of our favorite patios in Cleveland!). With claims of serving up Southern California street food with natural ingredients, you know the menu will be eclectic and tasty, too.

This is the perfect place to split some small plates with friends like their cheese and charcuterie board or buffalo tofu before getting big plates like their beer cheese mac with pork belly or vegetable poke bowl.

Okay, though, enough about the food. Let’s get into their equally inventive beers! They’ve got your classics like C-Town IPA and Bollard Pull American Porter, but for those willing to branch out, they have Legend of the Guava American Wheat with Guava or the Red Moon Rising Smoked Red Ale.

Our favorite, though, is the tasty Lake Erie Sunset Blood Orange American Wheat beer. It always goes perfectly with good friends, pretty sunsets, and that mac and cheese.

Great food, great venue, and great beer pretty much describe Noble Beast Brewing Company in a nutshell. On a warm, sunny day, enjoy the plants dangling from the ceiling, the front collapsible wall pushed all the way open, and crisp beers to sip.

With quirky beers like the Imperial Cookies and Milk Stout or the Kilbane’s Irish Nitro Stout, Noble Beast might convert anyone who claims to dislike dark beer. But the best beers are some of their German varieties like the Lichtenhainer, an ale brewed with beechwood smoked barley malt and malted wheat.

No matter the beer you get, be sure to try the food, too. They take pub fare to the next level with their impossible vegan burger, deliciously interesting salads, and their Mousetrap (local meat and cheese board with their in-house Kolsch mustard, pickled veggies, croustades, and flax crackers).

A short walk from other Ohio City breweries like Great Lakes Brewing Company, this location is also a must-visit. Originally opened in 2014, they now also boast tasting rooms in Columbus and Cincinnati.

If you’re a fan of sours, you’ll love Platform’s creations that come from its own sour beer-making facility (Phunkenship, which now has its own tasting room on Sackett Ave.).

In 2020, Platform opened up a new beer garden concept called The Lot, located right next to its Lorain Ave. location. The Lot is home to themed seating areas inside converted shipping containers and is a unique spot to grab a beer or two.

While it’s a bit of a drive west from downtown, this brewery will not disappoint. They offer a food truck and snacks most days, or feel free to bring your own – like some Swenson’s burgers! All of it tastes great with their beers on draft.

Notable offerings include their Pecan Brown Ale and Winter Ale in the colder months, and their Siblime and Cherry Wit in the summer. Relax with friends, play some board games that they provide, or try out their trivia during trivia night.

Plan on having your ID checked here. Located literally on a college campus – inside the student center of Case Western Reserve to be exact – this brewery is certainly offering more than the Natty Lite most of us were accustomed to from our college days.

With beers like the Tyndall Effect New England IPA and Salted Caramel Coffee Porter, you’ll surely be able to find something to enjoy. All while watching sports on the televisions, admiring photos from scholars of yore, and being pleasantly surprised by the variety of people who enjoy this brewery who aren’t students.

If you want a throwback to your college days (but with much better beer), this is definitely the place to go. It also is located in the University Circle area, which has tons of great places to check out including the Cleveland Museum of Art.

I guess with a name like Fat Head’s you’ve got to be huge, right? What started as a smaller brewery in Pittsburgh back in 1992, Fat Head’s grew, branching out into Cleveland in 2009 with two spaces: Fat Head’s Cleveland Brewery and Saloon in North Olmstead, and the huge production brewery that opened in Middleburg Heights.

And it isn’t just the space it is taking up that’s huge. Expect huge flights of beer and sandwiches as large as your head! The sandwiches are so large they literally call them “headwiches.” So come hungry (and thirsty) to their saloon and enjoy favorites like their year-round Bumbleberry or Head Hunter IPA, or their seasonal beers like their Holly Jolly Christmas Ale, G’Suffa Oktoberfest, Benjamin Danklin IPA, or Barley Brown’s IPA.

Be sure to check out their brewery tour in their new production facility, too. And if you’re ever in the Saloon, be sure to pick up some swag to take a photo with on your travels! They have a huge wall of Fat Head’s Around the World!

Saucy Brew Works has grown quite a bit in the last couple of years, especially with a new location in Pinecrest as well as in nearby cities including Columbus and Detroit.

To top it off, they have the Vibe Garden in their Ohio City location complete with sand volleyball courts, Giant Yard Pong courts, and plenty of picnic tables to relax on a warm summer evening with friends.

They also always have multiple TVs in their brewpub for watching Cleveland sports while you enjoy a tasty, freshly made pizza.

Some great beers to sample include their year-round favorite Love You, Bye Imperial Hazy IPA, and the Juicy ASAP IPA as well as their seasonal classics like the Three Hos Christmas Ale and What’s His Nuts? Vanilla Coffee Stout with peanut butter.

Did you know that Cleveland is currently home to more than 30 different craft breweries?? If you want to visit even MORE, here are 20+ additional breweries in the Greater Cleveland area (in alphabetical order to make it easier):

Address: 1526 W 25th St, Cleveland (Ohio City)
Known for: Beer and cider in a historic taproom – plus all the bookshelves!
Website: Bookhouse Beer

Address: 8377 Pearl Rd, Strongsville
Known for: A spot where you can eat, drink, AND brew your own beer!
Website: The Brew Kettle

The city of Cleveland has embraced its growing craft beer scene and has come up with the Brewery Passport for locals and visitors. You can pick up a passport at the Cleveland Visitors Center downtown, or through the free Destination Cleveland App if you’d prefer a digital version. Then you get to visiting!

Get a stamp after making a purchase at any local brewery (or check-in and snap a photo if you’re using the app). You can then turn in your passport for prizes after receiving 8, 20, and 34 stamps. Prizes include things like coasters, a pint glass, and a t-shirt.

With so many beers to try in Cleveland, it’s easy to go a little overboard. So, in order to have an equally fun AND safe brewery-hopping experience in Cleveland, you might want to consider going on a dedicated beer tour.

There are a couple different companies offering beer tours in Cleveland, including Cleveland Brew Tours.

OUR PICK: Cleveland Original Brew Tour – This 5-hour tour will stop at 4 different Cleveland breweries where you’ll get to tour the facilities, sample up to 16 different beers, and enjoy a beer-inspired lunch. (Book here!)

Note: Many images in this post were taken by my friend Jeremy of Living the Dream.

Who’s ready to go drink some beer in Cleveland??