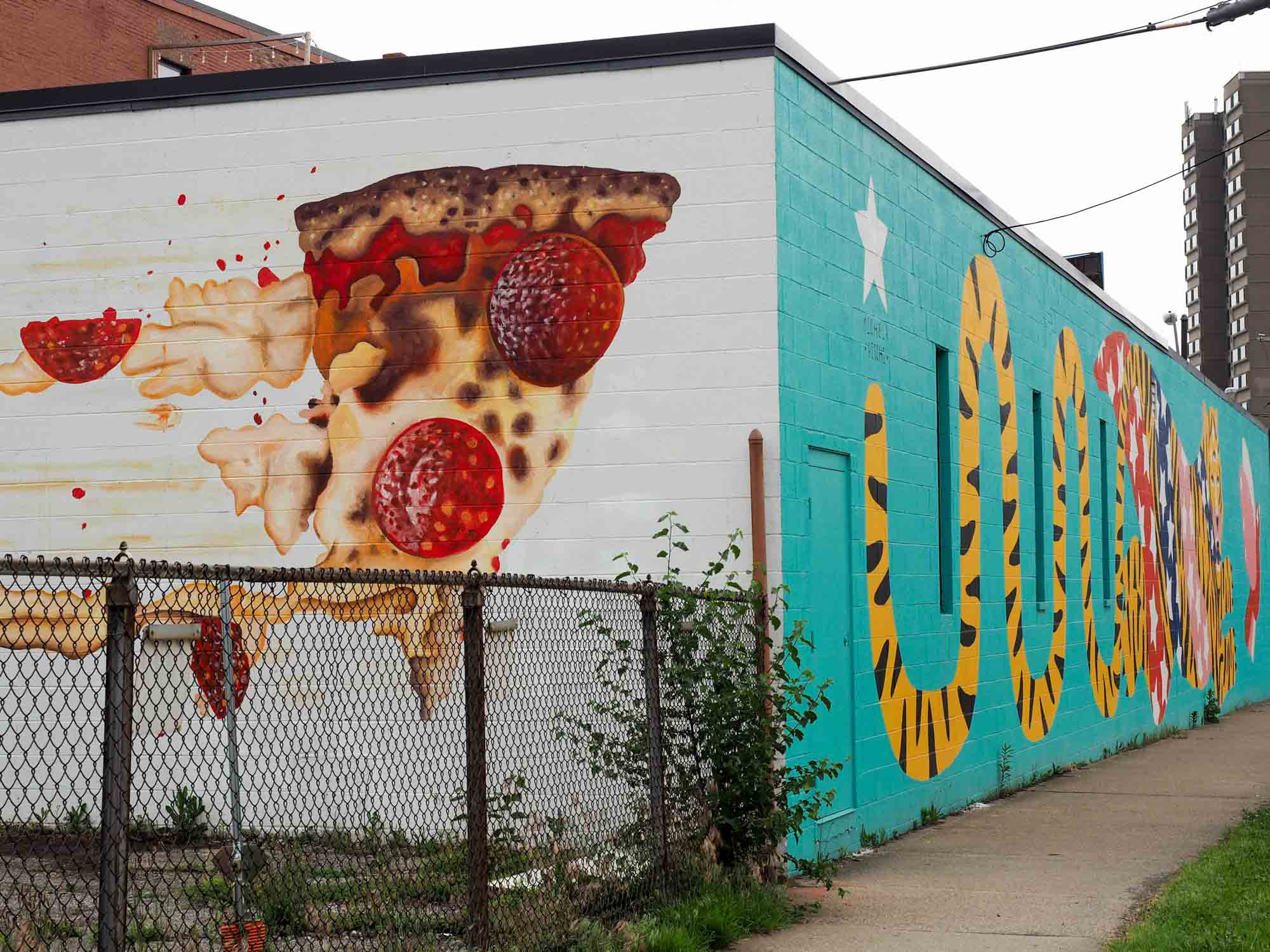 I’m not sure when graffiti became “street art,” or when it went from being considered vandalism to being recognized as public art. But I know that good murals are definitely art and that good street art can help breathe new life into old neighborhoods.

Cleveland’s street art scene has been growing, with new, bold murals going up around the city every single year. In Cleveland, these murals are often commissioned works of art, meaning they should be around for years to come!

To help you navigate Cleveland’s growing street art scene, I’ve decided to write a guide to all my favorite murals in Cleveland. This guide is divided by neighborhood, and I’ll provide as much info about each mural as I can to help you find them all!

(There’s also a map with all the murals plotted at the end of this post!)

Ohio City is one of my favorite neighborhoods in Cleveland – largely thanks to its great street art! There have been several mural projects in the last couple of years that have brought a lot of vibrant art to this neighborhood, so settle in for a long list.

This is probably one of the more iconic murals in Cleveland, and is part of NYC graffiti artist Victor Ving’s series of vintage postcard-style murals that are installed in cities all across the United States.

This mural replaced the chalkboard-style “Before I die, I want to…” mural that used to be on the side of Market Garden Brewery. This new one, with fried eggs floating like clouds in the sky, says “If you see a cloud behind the sun, it must be an egg.”

Market Square park sits where the old Pearl Street Market used to take place (the market that the West Side Market eventually replaced). The entire area was revitalized around the market’s centennial, and included several new works of public art being installed.

The “By Hand” mural was commissioned through the City of Cleveland’s Percent-for-Art program, and was painted by Buffalo-based muralist Augustina Droze. Droze didn’t just draw any hands, though – she spent time in the neighborhood photographing the hands of people who worked at West Side Market and other local businesses in order to get inspiration. The mural truly is “locally sourced.”

The stripes on the mural are actually aluminum, produced by local artist Mike Moritz.

The outside of Glass Bubble Project is covered in swirls of bright color. I don’t know who painted this one (if you do know, please let me know!), but I stop and smile every time I see it.

You should go inside, too, to check out their glass blowing studio and welding shop – they even have a pet rooster named Morty!

Market Garden really likes its murals! It put up another one on the side of its store and tour building on West 24th, behind the West Side Market.

It was painted by The Bubble Process, a duo made up of Sean Higgins and Nicholas Rezabek. In partnership with Market Garden and LAND Studios, the pair say this mural was inspired by a poem by Rowan Ricardo Phillips.

Mason’s Creamery actually has two murals on its Bridge Ave. building, but the giant ice cream cone is definitely my favorite!

This was painted by local artist Mike Sobeck. Sobeck says the flavors he painted are Mason’s raspberry sorbet (SO GOOD) and caramel ice cream.

Hingetown is technically part of Ohio City, but the artsy neighborhood is filled with so many great murals that I decided it deserved its own shout-out.

The murals in this area largely went up during the Creative Fusion mural project in 2016. That project, funded by the Cleveland Foundation, led to the creation of 11 new mural projects by both local and international artists.

If you’ve driven onto the Shoreway via the West 28th Street on-ramp, you’ve driven right over top of this incredible mural designed by Brazilian artist Ananda Nahu. The mural, which can be seen all along Washington Ave. between West 25th and West 28th, spans an astounding 620 feet, making it the largest mural in Ohio.

Nahu was hosted during the Creative Fusion project by the Cleveland Public Theater, and the mural depicts some of the local children she met through the theater’s Brick City Theater program. Brick City Theater is an intensive arts program for youth in the area.

This vibrant mural was completed in just 6 weeks with the help of local Cleveland artists like Gary Williams, Robin Robinson, Derrick Quarles and Adam Zimmerman.

This mural was a pretty big deal for Cleveland’s street art scene! Cleveland was chosen along with 4 other cities around the world for Instagram’s #kindcomments mural project in 2017, which coincided with Pride Month.

The Cleveland mural that resulted was painted by local artists Erin Guido and Joe Lanzilotta, who are project managers at LAND Studio.

Right across W 25th from the Love Doves is another Cleveland mural I love: the purple mural of Prince. It was painted by local artist Glen Infante, who also owns popular clothing brand iLTHY.

This 130-foot-long mural is kind of unmissable as you drive down Detroit. It was painted by Italian artist Michela Picchi, and I love the bright colors she uses in all her work.

They’re currently doing construction in this spot, so access to this mural might be limited; but it’s one of my absolute favorites! It’s on the same building as the flying tiger, but was painted by Mike Sobeck (the same guy who did the ice cream mural – yes, he paints lots of food!).

Note: I made up the name of this mural because it doesn’t seem to have a name. But I read that English artist David Shillinglaw took inspiration from Egyptian hieroglyphics for this three-story mural, so I’m giving it a name! I like that every time I drive by this mural, I feel like I notice something new about it.

If you’re driving down Church Street into the heart of Hingetown, it’s impossible to miss this mural. Purple-hued cartoon heads float on a bright yellow wall (and I mean BRIGHT). This is another work by LAND Studio’s Joe Lanzilotta.

Perhaps because of the success of the Creative Fusion project in 2016, the Gordon Square Arts District teamed up with LAND Studio and the Detroit Shoreway Community Development Organization to install a series of 8 new murals starting in 2017.

Gordon Square is an up-and-coming neighborhood with theaters, art galleries, and great food, so the murals are just one more reason to visit.

This large mural was painted by Jessie and Katey (Jessie Unterhalter and Katey Truhn), a duo from Baltimore, Maryland. This is the largest of the murals in Gordon Square.

This colorful mural was a collaboration between Cleveland artist Eileen Dorsey and Chicago-based Ish Muhammad, who’s known for his “post-graffiti” style.

This mural by former Clevelander Lisa Quine is eye-catching and definitely perfect for an Instagram pic. Unfortunately, as of April 2019, the area around the mural is still a bit of construction zone, and access to the mural is blocked by a fence. (You can still take photos of it, though!)

This adorable mural by Cleveland Heights-based Justin Michael Will is one of my favorites in this neighborhood; it never fails to make me smile.

Banter Beer and Wine is worth a visit as it is (beer! bratwurst! poutine!), but it’s extra worth visiting because of this beautiful mural.

It’s the work of Matthew Sweeney, a local artist known for his expressive drawings of hands. This mural has special meaning for him – he says it partially reflects when he and his wife lost their home to a fire in the same neighborhood in 2015.

Oddly enough, there haven’t been a lot of new murals going up in downtown Cleveland recently. But did you know that one of the first mural projects in Cleveland dates all the way back to 1973? The City Canvases project that year resulted in 10 huge murals going up downtown. Sadly, most have them have faded away by now.

This mural is actually a recreation of one of the original City Canvas murals from the 70s, and was re-painted in the same spot as Julian Stanczak’s original, at the corner of Prospect and E. 9th. It’s sort of a trippy mural that might make you feel dizzy if you stare at it long enough.

This one is certainly eye-catching as you walk down Prospect. And it’s meant to be. Artist Kay Rosen is known for graphically dramatic murals like this one that represent the stark divisions that currently exist in our society.

Found on one of the exterior walls of the Halle Bros. Parking Garage on Huron, this colorful architectural mural is the work of Nigeria-born artist Odili Donald Odita.

You’ll find this mural at the new Public Square in the heart of downtown. It was painted by Justin Michael Will, who was responsible for one of the Gordon Square murals, too.

NOTE: This one has recently been replaced. It looks like this might be a rotating piece! I can’t find any info on the artist of the current work, but this is what it looks like:

The East Side of Cleveland has some great mural art, too!

The Waterloo Arts District was one of the first in Cleveland to start putting murals up back in 2014 as part of the Zoetic Walls project.

In 2017, British muralist Camille Walala transformed the former Key Bank building on Waterloo Road into this eye-popping work of art. The building is now the headquarters of Poplife, a collaborative brand started by Jack Mueller that focuses on art, design, and wellness.

One of the newest murals in Cleveland, this beautiful work is by one of my favorite local muralists, Lisa Quine. The mural is on the side of the House of Swing jazz club in South Euclid, and is absolutely beautiful.

The mural went up in August 2019, and was sponsored by the city’s community development corporation One South Euclid.

This side of the building faces a neighboring CVS parking lot, which is where I recommend pulling in if you want to see it.

The “Welcome to Tremont” mural was new in 2018, painted on the side of the Tremont Convenience Mart by local artists Vic Savage and Alan Giberson. It was sponsored by Graffiti HeArt, which provides arts scholarships to underserved Cleveland youth.

Last year, a new 500-foot-long mural went up at Cleveland Hopkins International Airport. The colorful, cartoon-y mural depicts many of the things Cleveland is famous for, from Superman to Playhouse Square.

The mural was installed with the help of Destination Cleveland, the city’s tourism board, and virtually every visitor coming to Cleveland will see it when they exit the airport.

NOTE: These are not ALL of the murals or works of street art in Cleveland – just some of the most popular and eye-catching ones. I’ll continue to add to this list as more murals go up in the city, and as I visit more of them!

Do you have any favorite murals in Cleveland?

Amanda was born and raised in northeast Ohio, and has always been a fangirl of the state. Now, she wants to share her love of Cleveland with the world, highlighting all the best things to do, see, and eat in the CLE.