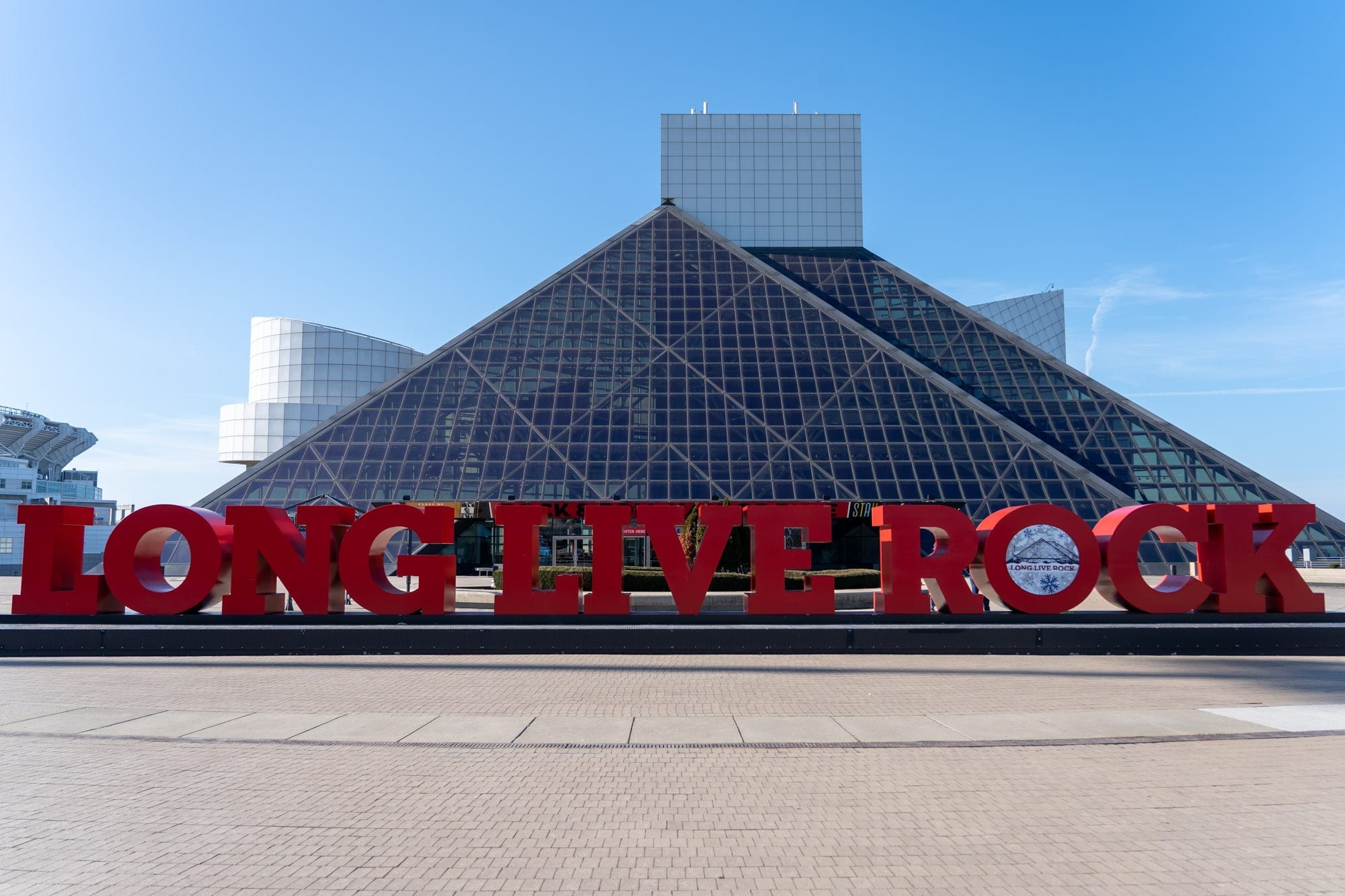 NOTE: Tickets for the Rock and Roll Hall of Fame must be purchased in advance online until further notice. The Rock Hall will be limiting capacity in the museum by using timed ticket entry, and all staff and visitors are required to wear face masks. Find more info and purchase tickets here.

When it comes to a museum all about rock and roll music, most people assume such a museum would be found in a major city like New York or London. But the Rock and Roll Hall of Fame lives right here in Cleveland, Ohio.

But the Foundation ultimately decided on Cleveland because of its ties to the early days of rock and roll.

Cleveland, you ask? Really? Why yes! It was here in Cleveland in the 1950s that the term “rock and roll” was coined by local disc jockey Alan Freed.

Freed was known for playing and promoting a mix of jazz, pop, and rhythm and blues music – music that he began calling rock and roll – on his Moondog Rock and Roll Radio Hour. Along with record store owner Leo Mintz (who supplied Freed with records to play), Freed introduced a generation to a new kind of music.

Since opening its doors in 1995, the Rock and Roll Hall of Fame has not only become an iconic building in Cleveland’s skyline, but also a must-visit spot in the city, seeing more than 500,000 visitors each year.

If you’re one of those half-million people planning to visit the Rock Hall this year, here are some tips for getting the most out of your visit:

1. DO buy your tickets in advance

The Rock and Roll Hall of Fame doesn’t normally “sell out,” but it’s still a good idea to buy your tickets in advance* so you don’t have to wait in a line to do so when you arrive.

If you buy your tickets online, you can either print them or show them on your phone in exchange for an entrance wrist band when you arrive.

You can purchase your tickets online here.

*Currently, dated and timed tickets MUST be purchased in advance in order to visit.

2. DO admire the architecture outside

Before or after your visit, be sure to spend some time in the plaza outside the museum in order to admire the Rock Hall’s architecture. The 150,000-square-foot building with its double pyramid and tower was designed by architect I.M. Pei, and is striking from every angle.

Fun fact: From above, the building is meant to look like a record player, with the plaza out front being the record.

For another cool vantage point, walk over to North Coast Harbor and Voinovich Bicentennial Park. You can see the Rock and Roll Hall of Fame from another angle here, with one of the Cleveland script signs in the foreground.

3. DON’T plan on being able to visit in just an hour

The Rock and Roll Hall of Fame is HUGE – its exhibition space covers 55,000 square feet over six levels of museum. So don’t think that you can just pop in for an hour and see it all.

If you want to zip through all the exhibits, you’ll need to allow at least 2.5-3 hours. And if you want to stop to watch some of the videos playing along the way, increase that time by at least an hour!

Pick up an exhibit guide when you enter the museum to make sure you don’t miss anything. The bulk of the exhibits are on Level 0 (one level down from the entrance), and then stretch up into the very top of the pyramid.

Some of my favorite exhibits at the museum include:

5. DO take time to watch some of the videos

The Rock Hall uses multimedia very smartly in its exhibits. Many parts of the museum have short 1-3 minutes videos you can watch quickly. But there are some longer videos, too.

Some of the longer videos worth watching include:

There’s also a series of short videos in The Beatles exhibit, one connected to each of the band’s albums. This one is my mom’s favorite!

Take time to wander through the “Early Influencers” exhibit and Stewart Galley to learn about the blues, R&B, bluegrass, and folk music that influenced the early sounds of rock and roll, and be sure to check out the “Rapper’s Delight” exhibit to learn how rock influenced the story of hip-hop.

7. DO plan to take photos

You’re free to take photos of almost all the exhibits at the Rock Hall (there are only a couple things that you’re not allowed to photograph, but these are marked). You’re just asked to turn off any flashes.

There are so many cool items to find!

8. DO pick up an instrument in The Garage

Level 2 of the Rock and Roll Hall of Fame has recently been transformed into an interactive space where you can learn to play real instruments, or even jam with friends in your very own band. This space is a lot of fun for all ages!

9. DO visit the Hall of Fame itself

The museum didn’t used to dedicate so much space to the Hall of Fame itself, but now Level 3 is all about the musicians that have been inducted into the Rock and Roll Hall of Fame.

You’ll find exhibits about recent inductees, an interactive section where you can watch induction ceremony highlights, and even stations where you can nominate an artist or group to join the Hall of Fame.

10. DON’T think you can only visit once

I find myself visiting the Rock and Roll Hall of Fame every couple of years – and every time I go, I see something new!

The Rock Hall swaps out exhibits and memorabilia frequently since it has a HUGE collection of items and can’t possibly put everything on display at once.

You can absolutely visit this museum more than once and still enjoy it.

11. DO have lunch at the All-Access Cafe

The Rock Hall has a cafe on Level 1 near its gift shop, and it’s actually a really good cafe! They serve everything from pizza to homemade soup to avocado toast.

If you want to make a whole day out of your visit, you don’t need to leave the museum for lunch.

The Rock and Roll Hall of Fame sits right on the edge of Lake Erie next to the Great Lakes Science Center. Right next to the science center is FirstEnergy Stadium, where the Browns play.

While there’s a lot of parking around the Rock Hall, I would NOT recommend trying to park anywhere close by on a Browns game day, as it’s difficult to find parking and prices often increase.

If you want to visit on a game day, park elsewhere downtown and either walk or take an Uber to the museum.

Other Rock and Roll Hall of Fame FAQs

Is the Rock and Roll Hall of Fame worth visiting?

Definitely! The entry fee for the Rock and Roll Hall of Fame is $30 for adults, but it’s worth it as long as you have a few hours to dedicate to visiting.

What are the Rock and Roll Hall of Fame hours?

From September-June, it’s also open until 9 p.m. on Thursdays. From July-August, extended hours include Thursday and Friday, when the Rock Hall is open until 8 p.m.

Can I visit the Rock Hall on a Cleveland layover?

Yes! If you find yourself with an layover at Cleveland Hopkins International Airport, you can absolutely grab a taxi or Uber to the Rock Hall for a couple of hours. The museum has a free coat check on Level 0 where you can also leave small suitcases.

Are there hotels near the Rock Hall?

Yes! The Rock and Roll Hall of Fame is located in downtown Cleveland, near the Huntington Convention Center and FirstEnergy Stadium. The following hotels are within a 15-minute walk (or less) to the Rock Hall:

Where can I find more info about the Rock Hall?

Have you visited the Rock and Roll Hall of Fame?