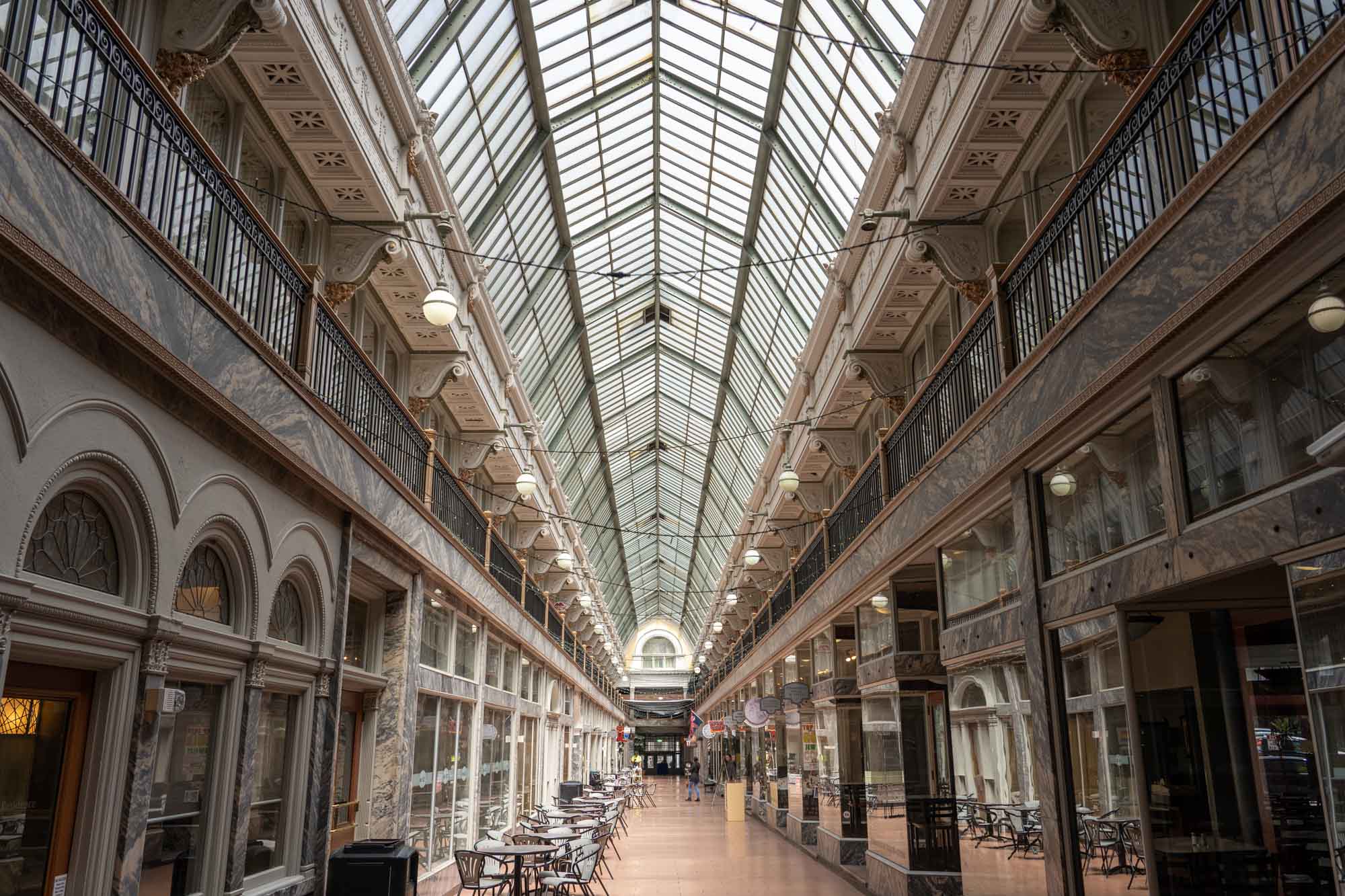 So I have good and bad news for you when it comes to the weather in Cleveland.

The BAD news is that Cleveland is one of the cloudiest cities in the United States, seeing more than 200 cloudy days on average per year. And of these 200 cloudy days, it’s likely to be raining or snowing for roughly 150 of them. (It’s an Ohio thing, guys.)

But the GOOD news is that, despite Cleveland’s often-gray weather, the city offers up lots of indoor things to do when the weather outside is downright frightful.

If you find yourself in Cleveland on a rainy (or snowy!) day, here are 10 great things you can still do year-round.

10 things to do in Cleveland when it rains

Cleveland has one of the best art museums in the United States, the Cleveland Museum of Art – and it’s completely free to visit! You can easily while away an afternoon enjoying the CMA’s curated galleries, hopping from Ancient Egyptian to Renaissance to far Eastern art. The museum has both a cafe and restaurant in the building, too, so you don’t even need to head outside to grab lunch.

You can check out the Museum of Contemporary Art, or MOCA, too, which is also free to visit. Its exhibits rotate throughout the year, so there’s always something new to see.

Other art museums and galleries worth checking out in Cleveland include the Transformer Station, SPACES Gallery, and the 78th Street Studios, which have a big open house on the third Friday of every month from 5-9 p.m.

You of course can’t visit Cleveland without visiting the Rock & Roll Hall of Fame! With music-related exhibits covering 55,000 square feet over seven levels of museum, the Rock Hall is the perfect place to spend a rainy afternoon.

There are videos to watch, TONS of memorabilia to drool over, and a lot of music history to soak in. (My favorite exhibits include the Early Influencers, Cities and Sounds, and Legends of Rock and Roll.) In summer 2019, the Rock Hall is also set to open its new “Interactive Garage,” which will allow you to play instruments and record/mix your own songs.

3. Get your history on

If history is more your speed than art, you can check out the Cleveland Museum of Natural History, which has some excellent exhibits on everything from dinosaurs to gemstones to human evolution.

Another great spot to visit is the Cleveland History Center (run by the Western Reserve Historical Society) where you can learn about the history of northeast Ohio. You can also tour two historic Cleveland mansions, and see and ride the restored Euclid Beach Park Grand Carousel.

There are also several smaller history-related museums in Cleveland dedicated to different topics, including the Dittrick Museum of Medical History, the International Women’s Air & Space Museum, and the Money Museum inside Cleveland’s Federal Reserve Bank.

After the Rock Hall, the first place I tell people they HAVE to visit in Cleveland is West Side Market. This market in Cleveland’s Ohio City neighborhood is part farmer’s market, part grocery store, and part food court, with a history that stretches back more than 100 years.

Sure, you can visit West Side Market on your own and do a little shopping/tasting independently. But I recommend booking a West Side Market food tour if you can. This is the ultimate way to enjoy the market and learn about its history along the way.

In the first half of the 20th century, Cleveland was both an important transportation hub and a bustling manufacturing center. By 1920, Cleveland was the 5th-largest city in the United States, and was home to some of the country’s wealthiest businessmen (you may have heard of some of them, like John D. Rockefeller).

Because of economic prosperity that persisted for decades, Cleveland ended up with some truly stunning architecture. While you may not want to wander the downtown streets in the rain to admire some of Cleveland’s notable buildings from the outside, there are several that are best appreciated from the inside anyway.

You’ll definitely want to check out The Arcade (one of the first indoor shopping malls in the US, financed in part by Rockefeller), the glass-domed ceiling inside the downtown Heinen’s (inside the old Cleveland Trust Co. building), and the downtown branch of the Cleveland Public Library.

These are just a handful of my picks for the most Instagrammable spots in Cleveland.

Cleveland has several lovely outdoor spaces, but you can’t fully appreciate them when it’s raining. But just because it’s wet outside doesn’t mean you can’t get a dose of nature!

Enjoy the outdoors indoors at spots like the Cleveland Botanical Garden, where you can enjoy the Glasshouse year-round, and the Rockefeller Park Greenhouse, which is an indoor garden and greenhouse run by the city.

If sightseeing isn’t really at the top of your to-do list while you’re in Cleveland, you can easily while away a rainy day by hopping between some of Cleveland’s best coffee shops.

Each of Cleveland’s neighborhoods has its own collection of great cafes. Some of my favorites include Brewella’s in Lakewood, Rising Star Coffee Roasters in Ohio City, and Pour downtown.

8. Do a DIY brewery crawl

Coffee is my drink of choice on a rainy day, but if you prefer a cooler beverage, why not put together your own brewery crawl? Cleveland is home to more than 30 craft breweries, many of which are within walking distance from one another.

RELATED: The Ultimate Guide to the Best Breweries in Cleveland

Did you know that the classic American Christmas movie “A Christmas Story” was filmed here in Cleveland, Ohio? Ralphie’s house can be found in Cleveland’s Tremont neighborhood, and today has been transformed to look exactly as it did in the movie.

The A Christmas Story house is now paired up with a museum across the street and is open for tours year-round.

Lastly, if rainy days make you just want to stay indoors and play video games, Cleveland has you covered for that, too.

Check out the 16-Bit Bar + Arcade in Lakewood, Superelectric Pinball Parlor in Gordon Square, and Punch Bowl Social in the Flats for arcade games. Or you could settle in for a board game at Tabletop in Ohio City or The Side Quest in Lakewood.

Punch Bowl Social also has bowling and indoor mini golf, and you can check out The Corner Alley downtown for another bowling option.

Most of Cleveland’s museums can be visited with kids, but there are a few spots that are more kid-friendly than others. Along with the Museum of Natural History, you can also check out these spots in Cleveland with kids:

What are some of YOUR favorite things to do on a rainy day?