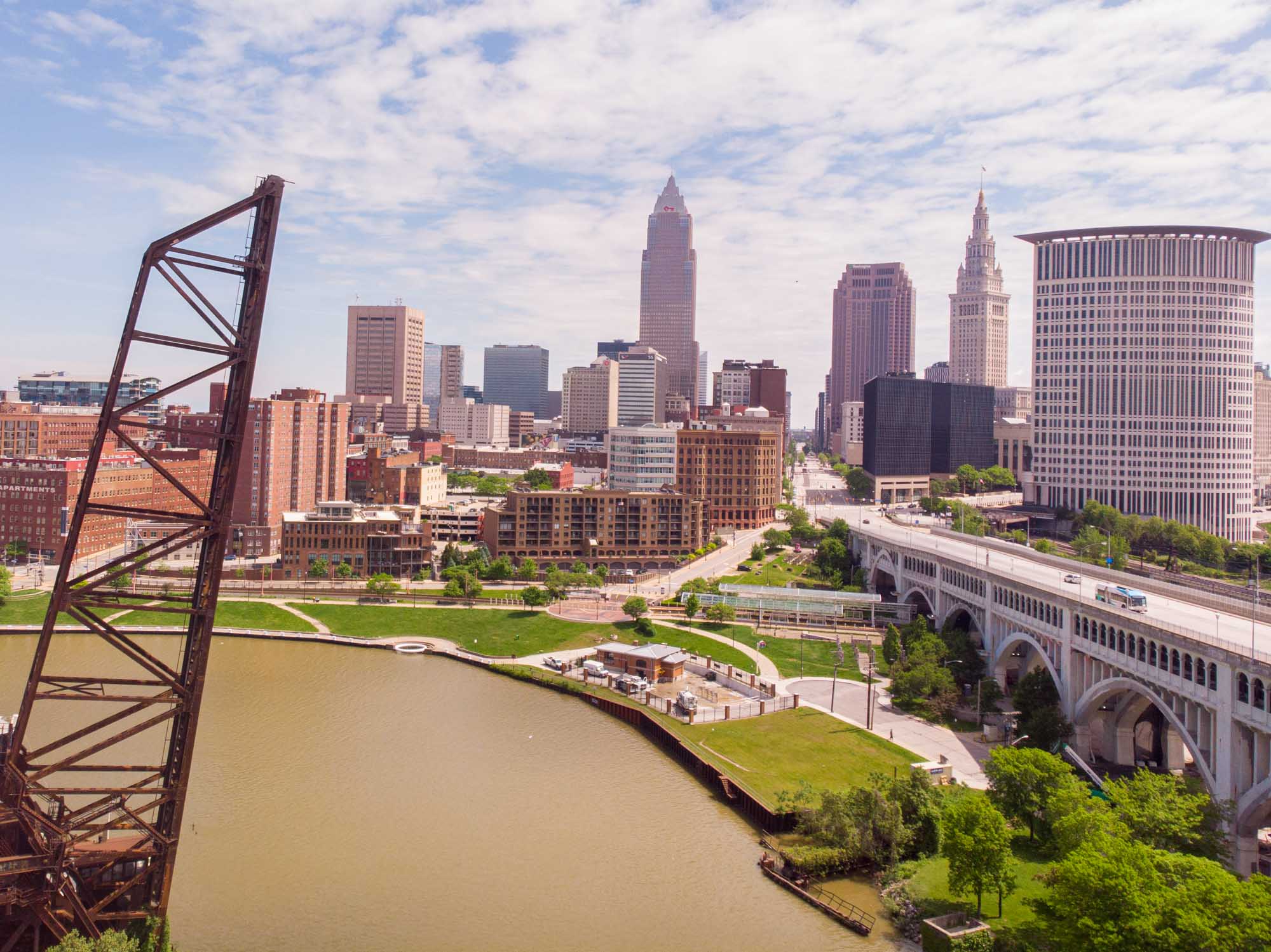 Cleveland is a summer city.

Sure, there are things to do in Cleveland year-round, but everyone who calls northeast Ohio home knows that it’s really the summer months that everyone looks forward to. With long days, shady patios, sunny beaches, and Lake Erie sunsets, summer really is one of the best times to be in Cleveland.

If you’re looking for some summer-specific things to do in The Land, read on to learn about our favorites.

12 Things to Do in Cleveland in Summer

Yes, Cleveland has beaches! The city sits right on Lake Erie, after all, which has beaches and even waves on windy days. Many of the city’s beaches are managed by Cleveland Metroparks as part of the Lakeside Reservation, meaning you can look forward to well-maintained spaces.

We’ve written about our favorite Cleveland beaches in more detail in another post, but here are a few of our local favorites:

2. Go to a Guardians game

Summer and baseball go hand-in-hand, especially in a sports-centric city like Cleveland. Going to a Guardians game at Progressive Field is a summertime rite of passage for most Clevelanders.

There are usually about 80 home games per season to choose from – but if we were going to pick a night to head to the stadium, we would choose a Friday for Dollar Dog Night and fireworks after the game.

Another baseball-related thing you can do in the summer is to visit the Baseball Heritage Museum at League Park, the original home of Cleveland baseball.

Our assertion that Cleveland is a summer city is only supported by the sheer number of restaurants in the city with outdoor patios. Patio season is a season all unto itself in Cleveland, and locals count down the days until their favorite brewery, bar, or restaurant patio opens each year.

We rounded up 40 great patios in Cleveland in another post, and even that post only scratches the surface!

Some of our favorite patios include:

There’s also lots of outdoor dining downtown along East 4th St., as well as a handful of rooftop bars in the city.

In the summer, all the best things in Cleveland take place outdoors. And this includes live music. Along with plenty of restaurants and bars that have live music on their patios throughout the summer months, there are also a handful of other places you can catch music outdoors on the regular in Cleveland.

The Cleveland Metroparks runs a summer concert series, this year called Sounds of Summer, with free concerts once a month.

And then there are concerts at Jacobs Pavilion at Nautica, too, an open-air concert venue in The Flats that hosts big-name musical acts.

Another summer music staple is the Cleveland Orchestra moving some of its summer performances to Blossom Music Center, where you can reserve seats in the pavilion, or simply show up with blankets and chairs and set up your own space on the lawn. You can find the 2022 Blossom schedule here.

5. Go kayaking on the Cuyahoga

Cleveland sits at the point where the Cuyahoga River empties out into Lake Erie. Being on both a river and a lake, there are of course plenty of opportunities to get out on the water in Cleveland.

Our favorite way to do this is to rent a kayak (or paddleboard, but we personally prefer a kayak), and paddle the Cuyahoga – you can even go all the way into Lake Erie. You can rent a kayak at Great Lakes Watersports in The Flats, which rents out single and double kayaks for $25-$30 per hour.

You can also rent kayaks at 41 North Kayak Adventures in Lakewood in order to kayak the Rocky River (which also empties out into Lake Erie).

Other ways to get out on the water in Cleveland including renting boats, booking a sightseeing or dinner cruise on the Goodtime III, or going on a sail and sip adventure with a company like BrewBoats (a floating cycle bar).

READ MORE: 10 Fun Ways to Get Out on the Water in Cleveland

Speaking of Lake Erie, watching a summer sunset on the lake absolutely has to go on your Cleveland summer bucket list.

There are plenty of great vantage points for sunset seekers. Downtown, our picks would be the E. 9th Street Pier/Voinovich Park, Wendy Park on Whiskey Island, and Edgewater Beach.

Outside of Cleveland, other favorite sunset spots include the Solstice Steps at Lakewood Park (west of the city), and Headlands Beach State Park in Mentor (east of the city).

Looking for a way to cool off in Cleveland when the temperatures soar? Treat yourself so some locally-made ice cream!

We have a guide to the best ice cream in Cleveland – and yes, it’s totally acceptable if you need to try them all to decide which one you like best!

Some of our local favorites include:

A unique thing you can do during the summer months in Cleveland is visit the Terminal Tower Observation Deck, found on the 42nd floor of Terminal Tower.

You can visit the tower on weekends, and tickets (which must be purchased online) are only $5. Views from the observation deck include unique perspectives on Public Square, The Flats, Progressive Field, and more.

Many Clevelanders have no idea that you can do this!

READ MORE: How to Visit the Terminal Tower Observation Deck

9. Enjoy the Asian Lantern Festival at the Zoo

The Asian Lantern Festival at the Cleveland Metroparks Zoo has become a summer tradition. Usually beginning in July and running at least through August (or sometimes even into September), this festival sees dozens of intricate lanterns installed throughout the Zoo’s grounds and exhibits.

The lanterns – many in the shape of various animals and mythical creatures – are lit up after dark, creating a very unique Zoo experience for visitors.

The Asian Lantern Festival is a special event, ticketed separately from regular Zoo admission. In 2022, the festival is set to begin July 6 and run through August 21. Get tickets here.

You can do this any time of year, but summer is one of the best seasons to hit the bike trails in and around Cleveland. You might not know this, but Cleveland (and northeast Ohio in general) has an extensive system of bike/hike trails.

Some favorite bike paths in Cleveland (and these are dedicated bike trails, not just bike lanes on roads) include:

We’ve already covered music and food, but there are also festivals that celebrate all of these things each summer.

Some cool summer festivals (and these are just a few!) include:

Check out our Cleveland Events Calendar for more info on specific festivals and events!

Labor Day is usually the unofficial “end” of summer in northeast Ohio, and in Cleveland the weekend is punctuated each year by the Cleveland National Air Show.

Stretching over 3 days, the Air Show is a family-friendly event with chances to see aircraft up close, and watch various aerial shows. The 2022 event dates are September 3-5, and the show will feature the U.S. Navy Blue Angels this year.

Luvin Lavender Farms isn’t located in Cleveland (you’ll find this farm in Madison, Ohio), but I still wanted to mention them on this list because a summertime trip to the lavender fields is always a good idea!

The lavender at this little farm usually blooms in late June-early July, and visitors can enjoy the 2 acres of lavender plants for free. Along with display gardens and some walking trails, the farm also sells lavender products in a little farm shop.

READ NEXT: The Best Sunflower Fields Near Cleveland to Visit

So there you have it! 12 awesome things you can enjoy in and around Cleveland in the summer.

What’s your favorite thing to do in Cleveland in summer? 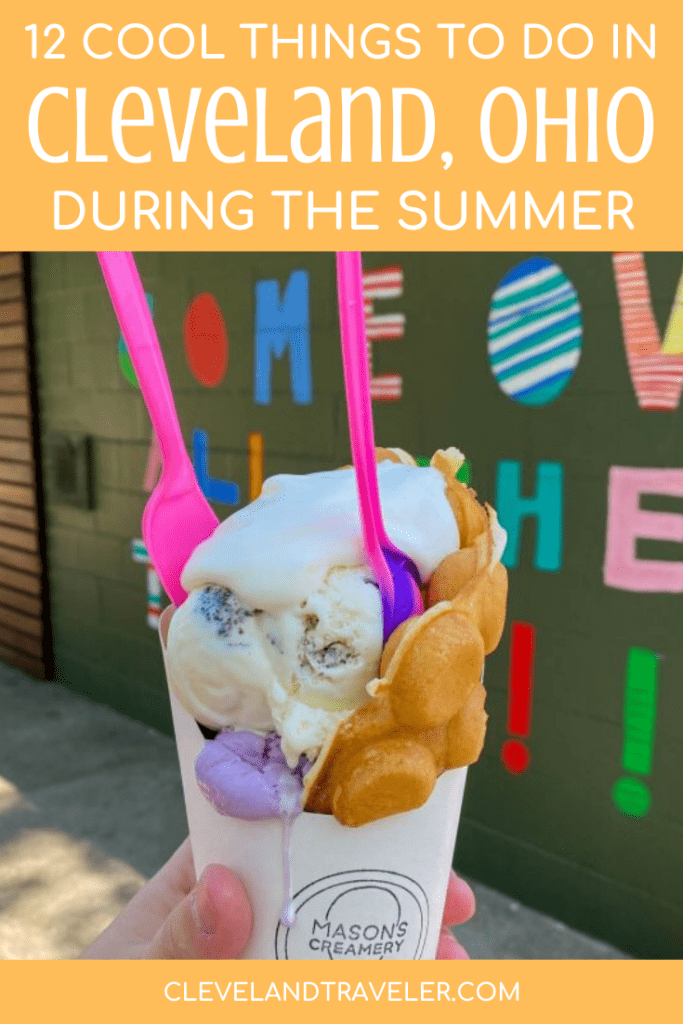