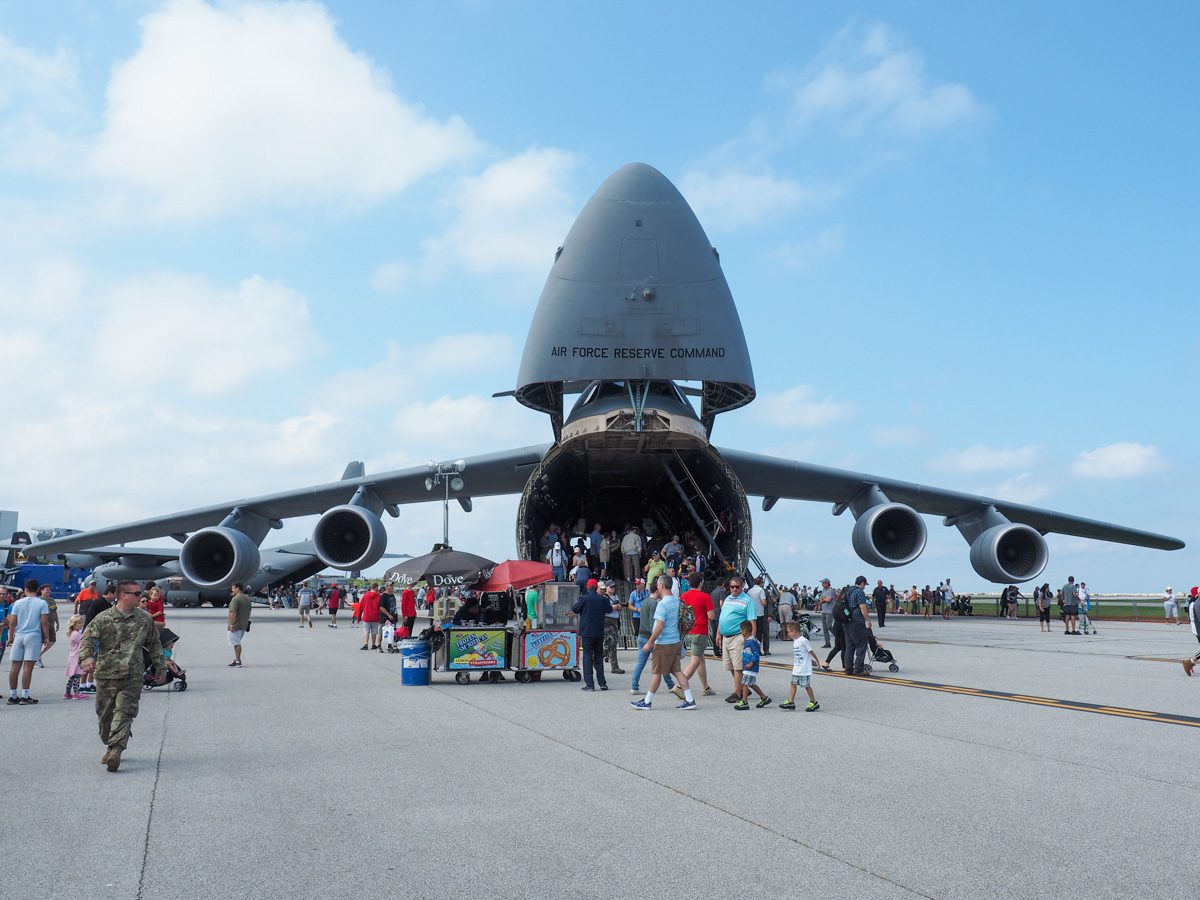 This air show is a Cleveland tradition with roots dating all the way back to 1929, when the event held was the National Air Races. It morphed into the National Air Show in 1964, and has been running ever since, making it one of the oldest annual air shows in the country.

If you’d like to be one of those spectators this year, read on to learn everything you need to know about going to the Cleveland National Air Show in 2021!

Note: Photos in this post are from past Cleveland National Air Shows.

When is the Cleveland National Air Show?

The air show happens over Labor Day weekend in September. In 2022, the event dates are September 3-5.

Things to do at the Cleveland Air Show

If you’ve never been to the National Air Show before, you might be wondering “What do people actually DO at an air show?” Well I’ll tell you! Here are all the things you can expect to find at the Air Show in 2022:

The most popular reason to go to the Cleveland Air Show is, of course, the aerial demonstrations by all sorts of aircraft!

The “headliners” of the 2022 show are the U.S. Navy Blue Angels. The pilots will put their aircraft through a choreographed performance that lasts a whole hour! Expect to see aerobatics and daring solo maneuvers.

Other aircraft that will be performing fly-overs and demonstrations include the F-16 Fighting Falcon (US Air Force), a C-130 Hercules, a C-130 Super Hercules (AKA “Fat Albert), a MiG-17F, and a B-25D Mitchell Bomber named “Rosie’s Reply,’ among others.

An F-15 Eagle will also perform a fly-by each day.

There will also be a solo aerobatics demonstration by Melissa Dawn Burns in an Edge 540, simulated bombing runs with pyrotechnics put on by Mad Bomber Airshow Special Effects, as well as an aerial show put on by the Golden Knights, the U.S. Army’s elite parachute team.

And these are just the things happening in the sky!

You can check the schedule for the various aerial demonstrations here. (Note that the schedule goes up roughly a week before the Air Show. Flying usually happens between 9:30 a.m. and 4 p.m. each day.)

2. Explore aircraft on the ground

Along with everything going on in the sky, the Cleveland National Air Show also offers attendees the chance to get up close and personal with all sorts of aircrafts on the ground.

Some of the aircraft you can see up close this year include:

From the US Air Force:

From the US Navy:

From the US Army:

There will be other aircrafts, too, like a T-45 Goshawk, a Boeing 737 MAX 8, the B-25 Mitchell Bomber, Life Flight and Coast Guard helicopters, and several small passenger airplanes.

You can explore the interiors of many of these aircrafts, and even climb into the cockpit for a memorable photo! (There’s also a fun “Top Gun experience” photo opp this year, where you can jump into the cockpit of an F/A-18 Hornet and have a photo taken for an extra fee.)

There’s always something new to see and learn about at the Cleveland Air Show. Cool things to check out this year include:

Be sure to bring a fully-charged camera or phone, because there are so many great photo opportunities here.

Can I bring my kids to the Air Show?

The answer is yes! The Cleveland National Air Show is a kid-friendly event. There’s even a dedicated “Kiddie Koncourse” area offering some crafts and activities for kids, along with changing areas and a parent lounge inside a shaded tent for families that need to take a break.

Children 5 and under get into the Air Show for free, but be aware that the show is full of loud noises. Parents bringing babies and toddlers might want to come prepared with baby-friendly earmuffs designed for hearing protection (like these).

Strollers and wagons are both permitted.

Note that furry children (AKA dogs and other pets) are NOT permitted at the Air Show.

Is there food available at the Air Show?

Yes, there are concession stands serving a variety of fair-style food and drink throughout the event.

You are also permitted to bring your own (non-alcoholic) beverages in plastic containers (like water bottles), as well as your own food and snacks as long as they’re not inside a cooler (coolers and loose ice are not permitted at the Air Show).

How do I get tickets for the Cleveland National Air Show?

In years past, you could purchase general admission tickets at the gate on the day you wanted attend. In 2022, though, tickets MUST be purchased online in advance.

Ticket prices are as follows:

There are also Sponsor Boxes (groups of 10 reserved seats), tables with umbrellas in the Barnstormer Club, and VIP seats in the Flight Deck Loge available for those with more of a budget.

If you’re purchasing General Admission tickets, you ARE permitted to bring your own chairs or blankets in order to make watching the aerial shows more comfortable.

Where can I park for the Air Show?

There is on-site event parking at Gate 13 at the far eastern end of Burke Lakefront Airport. Parking here costs $25 per car, and they are ONLY accepting credit card payments.

There are other parking options nearby, too, including the parking lot in front of the Burke main terminal (not operated by the Air Show), as well as in lots and garages throughout the downtown area. The closest areas to look for parking include North Coast Harbor, Downtown, and AsiaTown.

If you’re going to park elsewhere in Cleveland and walk to the Air Show, you’ll want to enter at the west end of the airport, through the Plaza Gate.

We’re excited that the Air Show is back in 2022, and hope this info helps you plan your visit to this unique event!

Are you planning to go to the Cleveland National Air Show this year?