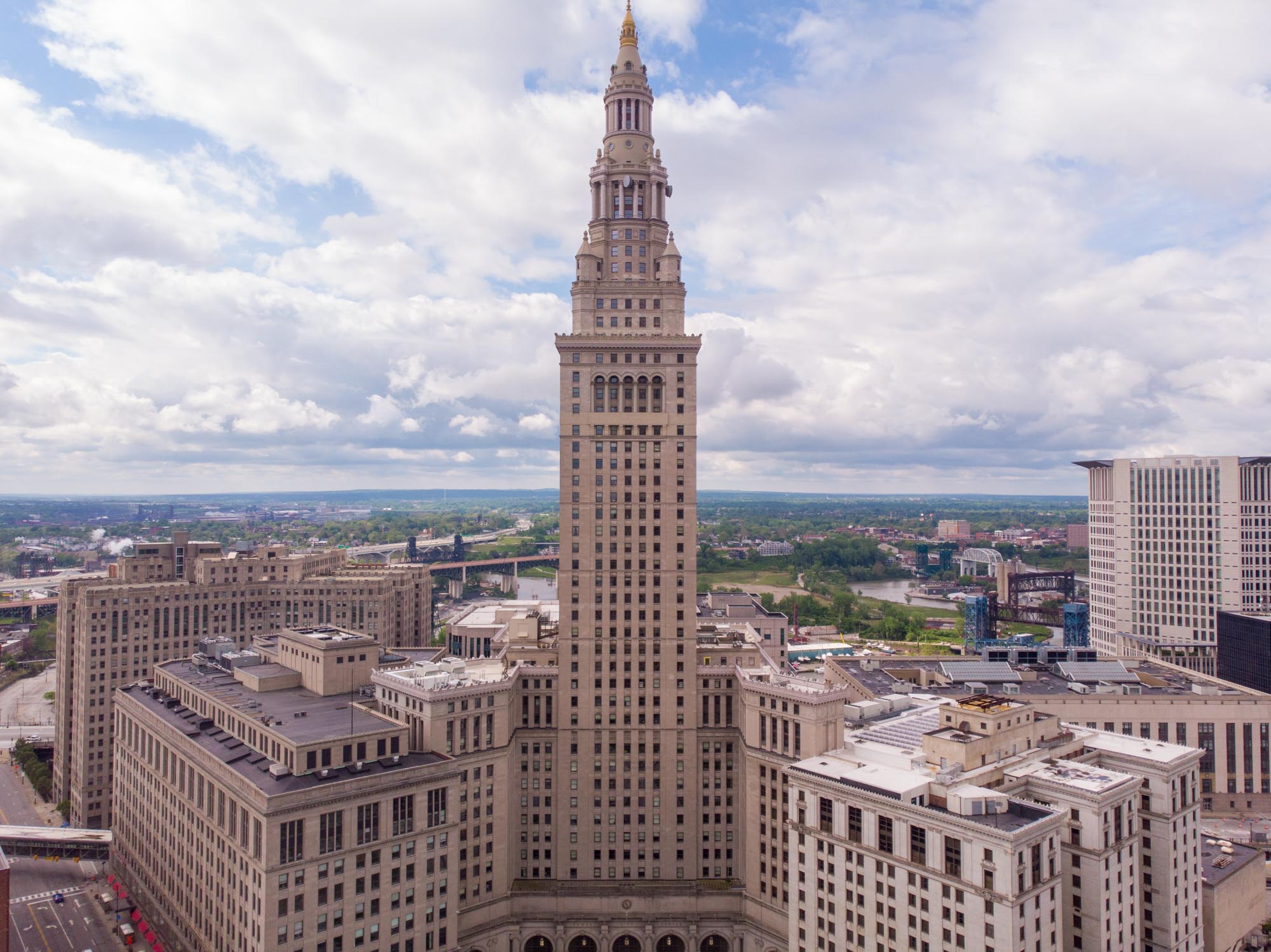 The Terminal Tower rises up 771 feet above Public Square in downtown Cleveland, and is one of the most iconic and recognizable buildings in the city’s skyline.

Built during the “skyscraper boom” of the 1920s and ’30s, Terminal Tower opened as an office building in 1928 atop Cleveland’s new rail station, Cleveland Union Terminal (so now you know where the name comes from). The building was officially dedicated in 1930, which was also when it was first lit up with spotlights and topped with a strobe light.

The Terminal Tower’s Observation Deck is 668 feet up on the 42nd floor. It opened along with the tower in 1928, and offers 360-degree views out over Cleveland and Lake Erie.

The Observation Deck used to be open all the time, but was closed indefinitely in 1976 after a gunman took 13 hostages inside the building (thankfully no one was hurt). It re-opened eventually, but was closed again after the September 11, 2001 terrorist attacks.

About a decade ago, the Terminal Tower Observation Deck was restored to look as it had back around 1930. And today, the 42nd floor is once again open to visitors.

Getting Tickets for the Terminal Tower Observation Deck

The Observation Deck at Terminal Tower is usually open on Saturday and Sunday afternoons (1-4 p.m. this year) in the spring and summer. Opening dates tend to change every year – in 2021, it looks like the Observation Deck will be opening on June 5 for the summer.

In 2020, the Observation Deck was also open on Saturday afternoons during the holiday season.

In order to visit, you need to book a timed ticket online – currently you need to purchase tickets through Eventbrite*. Tickets ARE NOT sold on-site, so you cannot arrive at Terminal Tower and buy a ticket in-person. (And this is not a pandemic-related thing; this is how tickets for this attraction have worked for the last several years.)

Tickets are $5 per person, plus a $1.27 ticketing fee – making the full price for a ticket $6.27. Again, buying tickets here is the only way to book a visit to the Terminal Tower Observation Deck.

*If you get to the Eventbrite site and it says “Event ended,” it means the Observation Deck is currently closed.

Booking tickets in advance is recommended, as there are a limited number for each 30-minute time slot. During the season, they usually release tickets for upcoming weekends about a month in advance.

Once you’ve chosen a time slot and purchased your tickets, you’ll want to arrive at Tower City a few minutes early in order to check in.

Enter Terminal Tower via the Public Square entrance, and check in at the round information desk in the lobby (it’s almost like a “second lobby,” as you need to pass through the entry space with the vaulted ceiling and all the Jack casino signs first).

After you check in (have your ticket with you, either printed out or on your smartphone), you’ll be buzzed through a set of secure doors by an employee, and pointed towards a line of elevators.

The ride to the Terminal Tower Observation deck requires two separate elevator rides. In the first elevator, you’ll ride up to the 32nd floor in about a minute. You’ll exit to the left, and follow signs for the second bank of elevators, where you’ll ride another up to the 42nd floor.

The Terminal Tower Observation Deck is completely enclosed, but a large amount of windows mean you can see everything on all sides. On a clear day, you can see at least 30 miles in any direction.

You can see Lake Erie, all the sports stadiums in the city, the Cuyahoga River and its bridges, The Flats, all the notable downtown buildings, and of course Public Square. (You cannot, however, see Canada – it’s a little too far.)

Your Terminal Tower ticket states you’re supposed to limit your visit to the Observation Deck to 25 minutes*, but I’ve visited twice in the past two years and never ran into anyone up there policing this policy.

However, you can definitely see all the highlights and enjoy the view in half an hour.

This is a fun activity suitable for the whole family, and is definitely something you should put on your list of things to do in Cleveland this summer!

(Also, did you know that they usually open the Observation Deck on weekends around the holidays, too? It’s a great spot to visit and see the Christmas decorations in Public Square from above!)

Have you visited the Observation Deck at Terminal Tower?