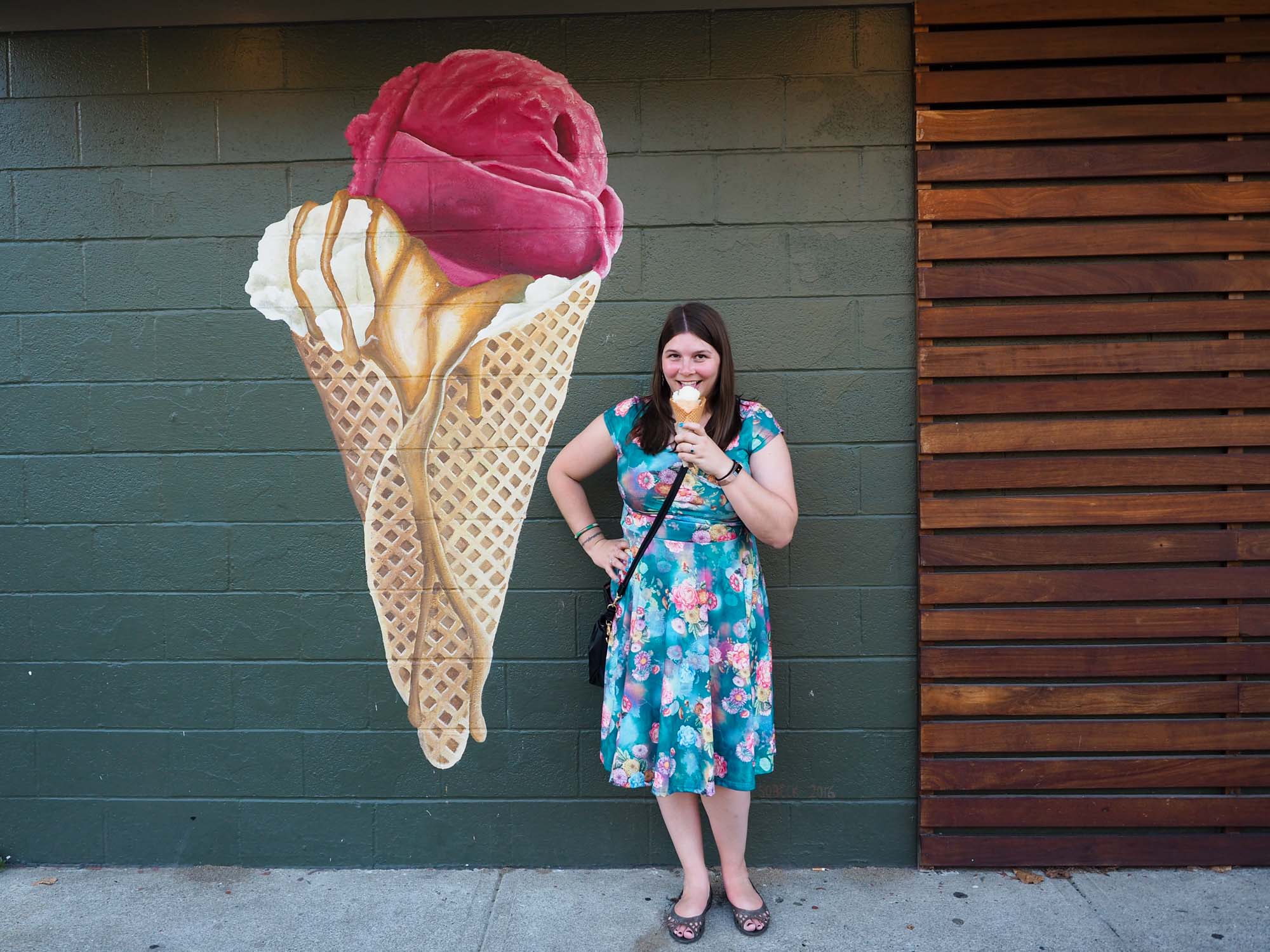 While ice cream shops in Cleveland aren’t quite as prolific as craft breweries and independent coffee shops, there are still a lot of cool spots to grab a sweet treat in the city.

Whether you’re looking for classic cones, unique flavors, or something a little crazy, you can find it in the Cleveland ice cream scene.

Here are all my favorite locally-owned shops that serve up the best ice cream in Cleveland.

(Note that these are not really listed in any particular order, since I really can’t pick favorites when it comes to ice cream!)

Mitchell’s Homemade Ice Cream has been an ice cream staple in Cleveland since Pete and Mike Mitchell opened their first shop in Westlake in 1999. The duo soon expanded to shops in Solon, Rocky River, Beachwood, and beyond, and opened their now-flagship store and kitchen in Ohio City in 2014. They now have 10 shops across the Greater Cleveland area.

My favorite Mitchell’s location is their Ohio City flagship store, where you can also go on behind-the-scenes tasting tours of their kitchen.

Mitchell’s serves up dozens of hand-crafted flavors of ice cream, yogurt, and sorbet, all made using as many Ohio-grown ingredients as possible. They have seasonal flavors like Lavender Honey in the spring, Campfire S’mores in the summer, Pumpkin Spice in the fall, and Peppermint Stick in the winter, plus all the regular favorites.

They also offer vegan and sugar-free options, as well as sundaes, shakes, cakes, and more.

If it’s innovative, Instagram-ready flavors of ice cream that you’re looking for, then you need look no further than Mason’s Creamery in Ohio City.

Mason’s is a small-batch ice cream shop known for its experimental flavors and making everything from scratch. They try new things all the time, whether it’s soft serve, ice cream donut sandwiches, or interesting collaborations with other local brands and businesses.

I love Mason’s shop, with its outdoor picnic tables and colorful murals; this is a great spot to hang out on a summer evening. AND, if you’re dairy-free, Mason’s has one of the largest selections of vegan-friendly flavors.

Also be sure to try a scoop inside a fresh egg waffle at least once!

During the winter months, Mason’s does something extra unique and actually switches from serving ice cream to ramen noodles, making it a very unique year-round spot.

In 2021, they also started offering Korean corn dogs, and have kept these on the summer menu in 2022.

When I asked people on Twitter about their favorite Cleveland ice cream spots, one shop kept being mentioned: Honey Hut.

Honey Hut doesn’t actually have a location in downtown Cleveland, but it’s such a local favorite that I decided it deserved a spot on this list anyway. They’ve been serving ice cream in the area since 1974, and are known for using honey instead of sugar as a sweetener for their flavors.

Honey Hut serves up 13 regular homemade flavors, along with extra seasonal ones that change monthly. Must-try flavors include their Honey Pecan (a take on a butter pecan) and Orange Blossom.

Are you ready to live out all your 90s kid fantasies in ice cream form? Because that’s pretty much what you can do at Remixx Ice Cream + Cereal Bar.

Here, all the ice cream starts out as vanilla. But you create your own flavor combinations by adding in sugary cereals and other sweet treats to make every kid’s ice cream dream.

The ice cream cones here aren’t cheap, but that’s because they are HUGE, and hand-mixed based on your choices. Every order comes with a cereal blended into the ice cream, another cereal or treat added on top, and a drizzle to finish everything off.

They have suggested flavor combos on the menu, or you can make your own.

Remixx serves up their ice cream in cups, cones, and milk shakes. Just be warned that you probably won’t be able to finish an order on your own!

Level up your ice cream experience – by putting it in between a pair of delicious cookies! Cathy’s is located inside the Cleveland Arcade, and serves up regular ice cream, but is (obviously) most known for its massive ice cream sandwiches.

13743 Madison Ave, Lakewood (with shops in Mentor and Stow, too)

To be fair, Lakewood’s Addicted doesn’t *just* do ice cream. They also serve up espresso drinks and cold brew, cookies and muffins, and even sandwiches. But the shop went viral last year for their Crazy Shakes – which, yes, are indeed crazy.

Just be aware that these crazy milkshake concoctions cost about $15 (but they are definitely meant to be shared).

But something the ice cream-lover might not know is that they also can serve up all of their freshly-made bubble waffles with a scoop (or two) of ice cream!

What I especially love about this spot is that you can watch as the bubble waffles are made – including how they’re given their crispy exterior with the help of a hair dryer at the very end!

Still looking for more great local ice cream shops in the Greater Cleveland area? You can also check out:

An ice cream note: Not all of these Cleveland ice cream shops remain open during the winter months, so please check times online if you’re visiting in the winter!

Where’s YOUR favorite spot to get ice cream in Cleveland? 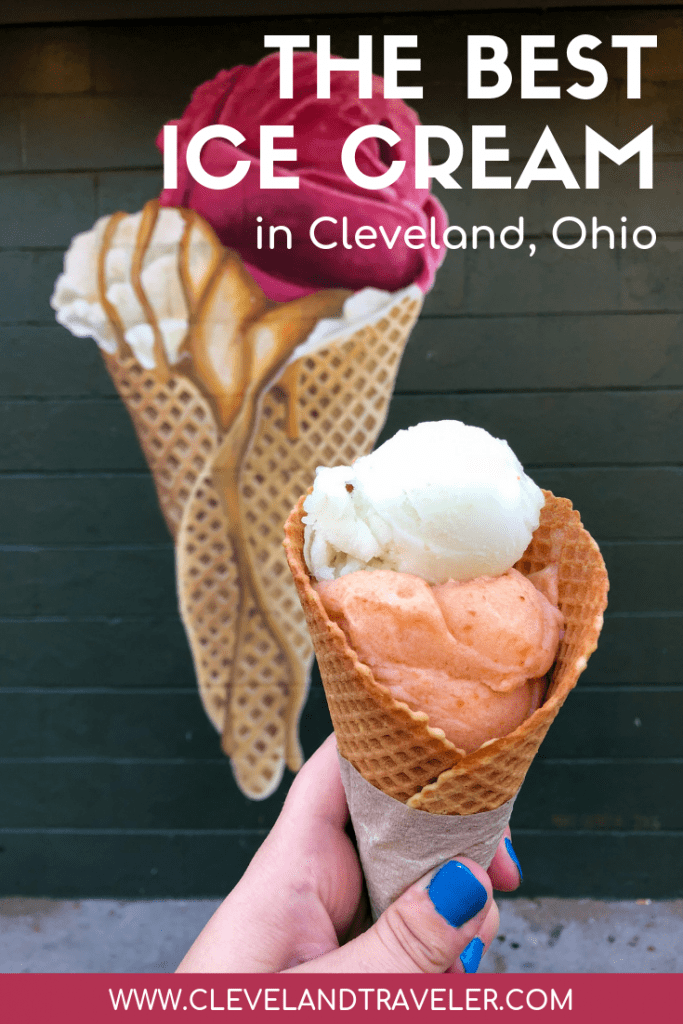