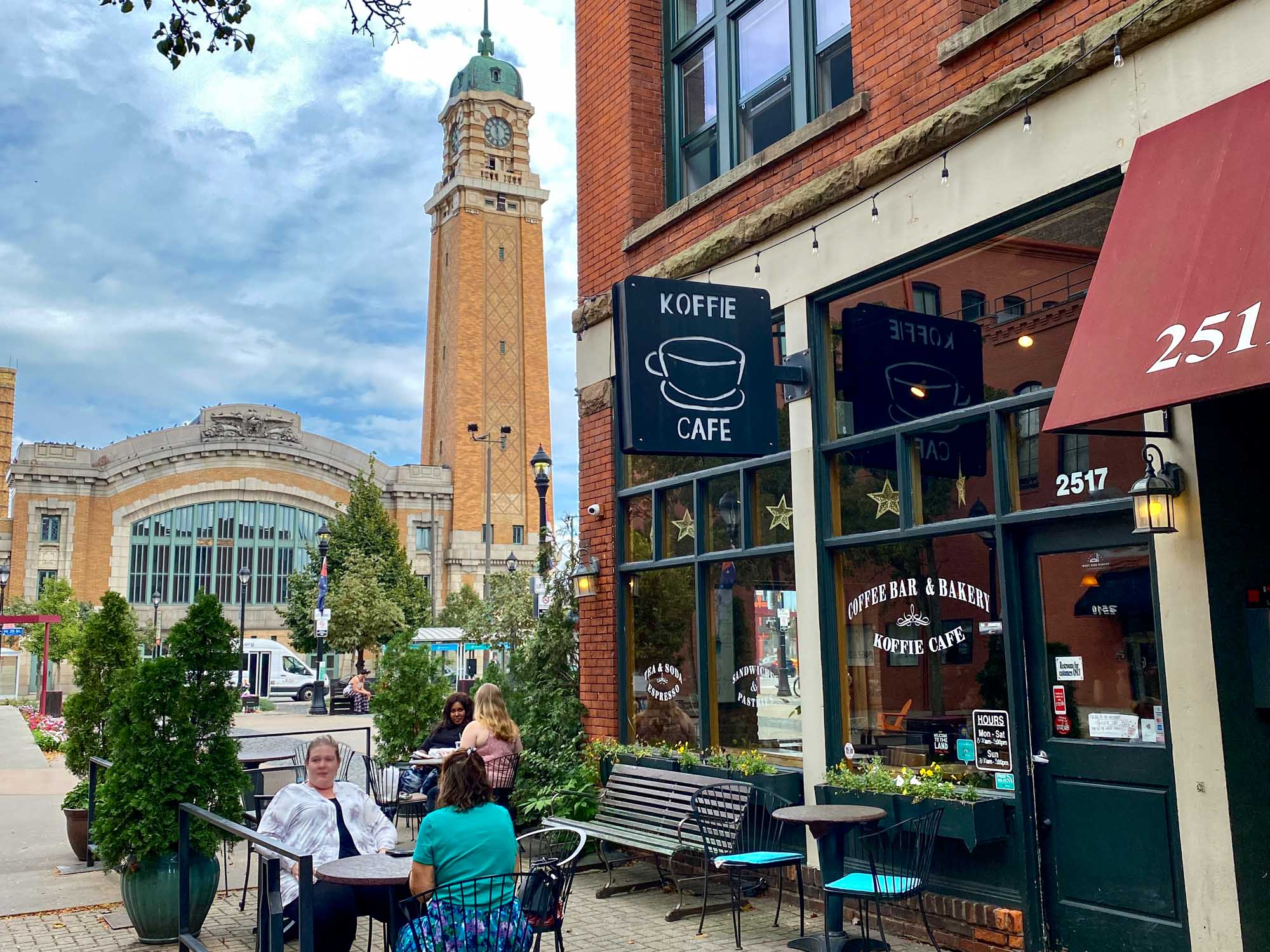 Are you looking for the best things to do in Ohio City?

Ohio City is known for being a trendy neighborhood home to many dining and entertainment options. Here’s everything to know about visiting one of Cleveland’s coolest neighborhoods!

Ohio City is located on Cleveland’s west side, across the Cuyahoga River from downtown.

Originally, this neighborhood was separate from the rest of the city. It became an independent municipality in 1836, but was eventually annexed as part of Cleveland in 1854.

Ohio City attracted European immigrants during the late 19th century and early 20th century from places like Ireland, Germany, and Hungary. It became a bustling neighborhood, with many seeking employment during Cleveland’s years as a boom town.

The origins of Ohio City as a foodie destination started more than 100 years ago, with the opening of the West Side Market in 1912 and the numerous distilleries and breweries around the neighborhood.

Now, Ohio City is a trendy neighborhood that attracts both locals and visitors with its many hip restaurants, craft breweries, and more.

Top Things to Do in Ohio City

There’s no shortage of things to do in Ohio City.

Here are some of the best activities to check out in this neighborhood:

West Side Market is an iconic indoor food market in Ohio City. Home to over 70+ vendors, you can find everything from fresh produce and meats to baked goods and desserts here.

Along with just doing regular shopping or grabbing lunch here, you can also take a West Side Market food tour if you want to learn more about its history.

There are murals throughout Ohio City, with an especially large concentration in the area known as Hingetown. (Hingetown is the area south of Detroit Ave. between W 25th and W 38th.)

Here are some of our favorite murals to check out:

RELATED: Cleveland Street Art: The Best Murals in Cleveland and Where to Find Them

If you want to continue your art journey around Ohio City, check out SPACES or the Transformer Station, both art galleries with exhibitions from emerging local artists.

If you have a group of friends and are looking for something unique to do, consider heading over to Perplexity Games in Ohio City. They have a handful of cool escape rooms to solve (including a Cleveland-themed one!), and even a VR room where you can try out a variety of games.

There are a few unique businesses in Ohio City where you can play everything from board games to pinball.

If you love candles, you can experience making your own at Cleveland Candle Company in Ohio City.

Choose the container and size of the candle you’d like to make, pick your favorite scents, and a guide will help you narrow down 2-3 scents that will make the perfect candle.

Where to Eat in Ohio City

Ohio City is known for being a standout dining destination with some of the best restaurants in Cleveland.

You’ll never run out of new and inventive places to try in Ohio City, whether you’re looking for somewhere to grab a casual brunch with friends or have a swanky date night.

Ohio City is home to lots of great Cleveland coffee shops. Here are our favorites:

Ohio City is known for its breweries, being home to some of the best breweries in Cleveland. There are so many breweries here, in fact, that they deserve their own section in this post!

In the warmer months, many of these breweries have outdoor patios where you can spend a sunny afternoon (many are dog-friendly too!)

Great Lakes Brewing Company opened in 1986 in what was formerly the old, rundown neighborhood of Ohio City. They brought business back to the area and paved the way for many breweries to come.

Don’t miss their Cleveland-themed beers like Burning River IPA (named after the famous Cuyahoga River catching on fire) and the Elliott Ness Amber Lager (named for the prohibition-agent-turned-safety-director in Cleveland).

Platform Beer Co. is another one of the best breweries in Ohio City. It’s been around since 2014, and is definitely a local favorite. They have an outdoor beer garden, and also some unique sours, which come from its sour beer-making facility, Phunkenship (which now has its own tasting room in Tremont).

Forest City Brewery is a cozy, intimate brewery in Ohio City that is perfect for date nights. They also have a great outdoor space that is open during the summer months.

Saucy Brew Works is a fun place to hang out with friends. They make some tasty beers and serve up good pizzas, and have a nearby outdoor space with sand volleyball courts and plenty of picnic tables to relax on a warm summer evening.

One more Ohio City brewery to check out is Market Garden Brewery. Known for their award-winning craft beers, they have a large indoor and outdoor space – in fact, their beer garden is one of our favorite patios in Cleveland.

There are more breweries here, too, including Hansa, Nano Brew, Bookhouse, and North High Brewing. (See? So many Ohio City breweries!)

RELATED: The Ultimate Guide to the Best Beers and Brews in Cleveland

Are you trying to plan to perfect date night in Ohio City? This neighborhood is great for date nights, with a buzzy atmosphere and plenty of great restaurants, bars, and activities.

Start off your date browsing the West Side Market, hitting up Tabletop Board Game Cafe for some friendly competition, or even play some shuffleboard at Forest City Shuffleboard.

Then head to dinner at one of Ohio City’s many restaurants, before finishing the night off with some after-dinner drinks.

Getting to Ohio City

Ohio City is just across the river from downtown Cleveland.

It’s accessible via public transit, and is just one stop away from the downtown Tower City Station on the RTA rapid train.

If you’re driving, be aware that it can be difficult to find parking along the main drag that is W 25th St. While metered parking is free after 6 p.m., spaces can be hard to find. Side streets further away offer free parking and more availability.

If you can’t find free street parking, the lot behind West Side Market is fairly inexpensive (your first 90 minutes is free, and then it’s $1 per hour after that). Also, some places offer valet parking for a small fee.

Rideshare through Uber or Lyft is another easy way to reach Ohio City.