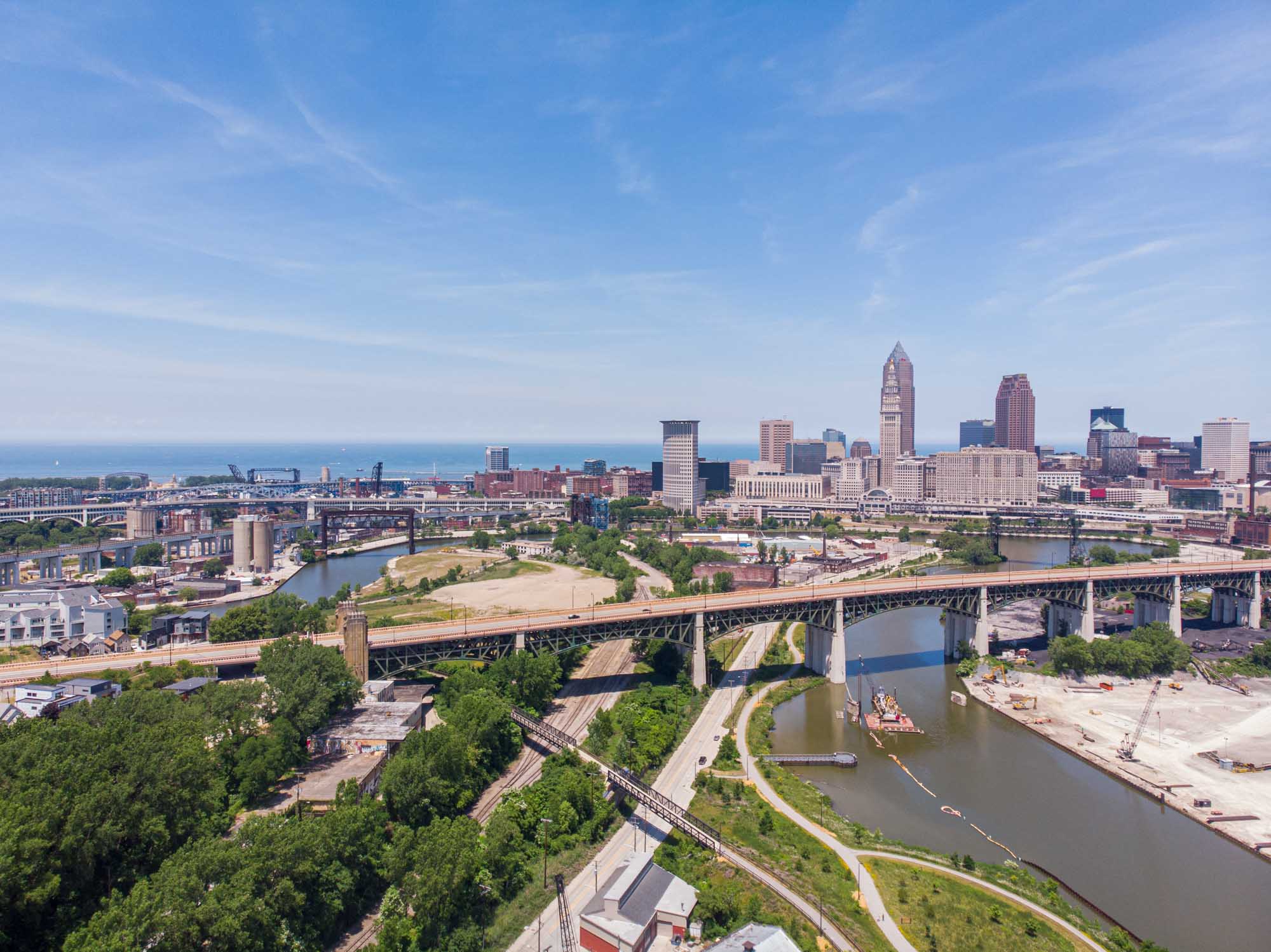 Cleveland is a pretty perfectly-sized city to explore in just a day. Whether you want to visit a museum, hang out by Lake Erie, or go craft brewery-hopping, everything is pretty close together; you can easily drive from one side of the city to the other in 10-20 minutes.

If you’re in town for a conference or sporting event, or just looking to show some out-of-town visitors around Cleveland for a day, here’s a one day in Cleveland itinerary you can use for inspiration!

(Warning though: this will be a very busy day in order to squeeze it all in!)

One day in Cleveland itinerary

If you’re visiting the city from out of town, chances are you’ll be staying somewhere in downtown Cleveland (check out our hotel guide here if you need suggestions). And staying downtown puts you in the perfect position to do a little morning wandering.

Start out with a some local coffee. Stop in to Rising Star Coffee Roasters inside the Cleveland Arcade for locally-roasted coffee AND a look at one of the city’s architectural gems. The Arcade opened in 1890, and is regarded as one of the first indoor shopping centers in the US.

Today, the Arcade is mostly utilized by the Hyatt Regency hotel, but there are a few restaurants at either end, too.

Or, if you need a full-on breakfast, head across the street into the 5th Street Arcades, where you can grab a table at Addy’s Diner.

From there, head to Public Square, where you can admire buildings like Terminal Tower and the Old Stone Church, along with the Soldiers’ and Sailors’ Monument. Nearby, the Fountain of Eternal Life and Cleveland Public Library are also worth passing by.

The most popular museum with visitors to Cleveland is undoubtedly the Rock and Roll Hall of Fame; in fact, this museum is sometimes a main reason for people to plan a trip to Cleveland!

The Rock and Roll Hall of Fame has been a staple in the city since it opened in 1995. Today, the museum has exhibits covering six floors within a striking I.M. Pei-designed building on the lakefront.

Exhibits here cover everything from rock’s early influences, to rock and roll legends. Plus there’s the Hall of Fame itself, along with an entire floor where you can try your hand at playing different instruments.

To fully enjoy the Rock Hall, you’ll need to allow yourself at least 2-3 hours, so getting an early start here isn’t a bad idea.

Not really interested in the Rock and Roll Hall of Fame? That’s fine! Cleveland has plenty of other great museums to choose from. My other top pick would be the Cleveland Museum of Art, which is a fabulous art museum over in the city’s University Circle neighborhood.

With works by artists ranging from Monet to Andy Warhol, there really is something for everyone here. My favorite exhibits include the ones on Egyptian and African art, along with the Armor Court. There’s also a sculpture garden out the back of the museum, surrounding the peaceful Wade Lagoon.

The best part? The Cleveland Museum of Art is completely free to visit!

RELATED: Visiting the Cleveland Museum of Art: 9 Things You Have to See

Since the Cleveland Museum of Art is free to visit, you might find yourself satisfied after an hour or two. If you still have time to kill before lunchtime, consider driving over to Lake View Cemetery, which is a beautiful, European-inspired cemetery near Little Italy.

Just a few of the notable graves you can find here include John D. Rockefeller (did you know he started Standard Oil right here in Cleveland?), Eliot Ness, Harvey Pekar, and more. You can also visit the James A. Garfield Memorial (resting place to a former US President) and Wade Chapel (with a Tiffany-designed interior).

Both the Rock and Roll Hall of Fame and Cleveland Museum of Art have (fairly good) restaurants inside them, so you could linger a bit longer and grab something quick if that sounds good to you.

Otherwise, I recommend crossing over the Cuyahoga River into Ohio City for lunch. At one time a completely separate city from Cleveland, Ohio City today is one of Cleveland’s most popular neighborhoods – especially when it comes to restaurants and breweries.

If you want to try some local craft beer alongside your lunch, you can’t go wrong with Market Garden Brewery (they have arguably the best outdoor beer garden when the weather’s nice), Great Lakes Brewing Co, or Nano Brew – though it’s worth noting that these spots aren’t open for lunch every day.

You could also head over to Hingetown (a small area within Ohio City) to grab pierogi from Jukebox, pizza and beer from Saucy Brew Works, or a delicious sandwich from Larder.

Hingetown is also a great neighborhood to go mural-spotting in Cleveland!

Before you leave Ohio City, be sure to stop in to West Site Market. This public market is over 100 years old, and the architecture alone is worth visiting for (but I’d also recommend picking up some pastries or other treats).

From Ohio City, it’s a fairly short drive to Edgewater Park, one of the lakefront areas managed by the Cleveland Metroparks.

Out-of-towners are always surprised to learn that Cleveland has beaches, but we do! And the largest public beach on Lake Erie in the city is at Edgewater Park. There’s a large sandy area good for swimming and sunbathing, along with plenty of space for picnicking. There’s even a separate dog beach!

Above the beach area in Edgewater Park is one of the best skyline views of the city, along with one of the Instagrammable Cleveland script signs, which is always worth a quick photo stop.

RELATED: The Cleveland Script Signs and Where to Find Them

If you’re visiting Cleveland during the balmy summer months, then there’s a good chance you might be in for a treat in the form of a Lake Erie summer sunset. Sunsets over the lake are often stunning!

My favorite places to watch a sunset include Wendy Park (near Edgewater), and the Solstice Steps at Lakewood Park (slightly west of downtown).

Dinner in Lakewood or Tremont

If you opt to visit Lakewood Park for sunset, then grabbing dinner in Lakewood might make the most sense.

My favorite dinner spots in this neighborhood include Rood Food & Pie, Forage Public House, Harlow’s Pizza, Humble Wine Bar, and Thai Thai, depending on what you’re in the mood for.

If you’d prefer to explore one more neighborhood instead, then head to Tremont for dinner. There are tons of restaurants and bars around Lincoln Park and along Professor Avenue to choose from.

Some Tremont favorites include The South Side, Dante, Barrio, the Bourbon Street Barrel Room, and Edison’s Pizza Kitchen.

Drinks in Tremont or Ohio City

Up for a nightcap after dinner? Tremont and nearby Ohio City are home to some of Cleveland’s best and most atmospheric cocktail bars, including Cloak & Dagger, the Spotted Owl, Velvet Tango Room, and Porco Lounge & Tiki Room.

You can’t go wrong with any of these cocktail bars – but note that reservations are recommended at all of them!

And there you have it – an epic day of exploring the best that Cleveland has to offer, from architecture to museums to some seriously good food and drink.

Hopefully this Cleveland one day itinerary helps you plan your own visit to Cleveland!