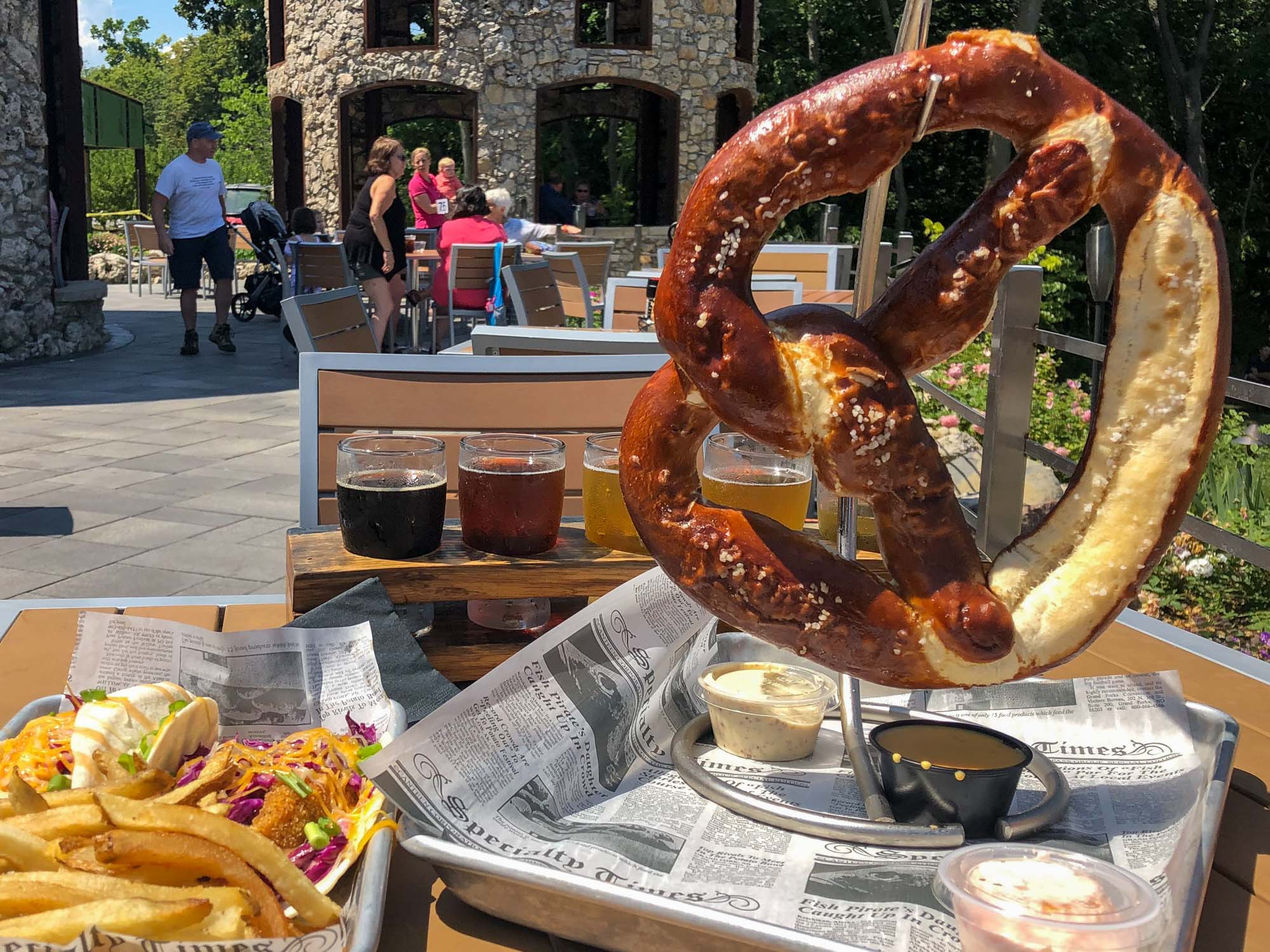 Summer is quickly coming to a close, and as the autumn season approaches, harvest festivals abound and Oktoberfests are usually being celebrated left and right.

Cleveland is no exception. Oktoberfest in Cleveland is the largest annual outdoor event in the city, with a lot of great food, music, and, of course, German beer.

This is the ultimate guide on how to celebrate Oktoberfest in Cleveland, including how to go to the official event PLUS ways to celebrate elsewhere around the city.

Everything you need to know about Cleveland Oktoberfest

When is Cleveland Oktoberfest?

In Germany, where Oktoberfest originated, the festival isn’t just celebrated for a few days. In Munich in Bavaria, Oktoberfest lasts more than two weeks, usually running from mid-September to the first Sunday in October.

In Cleveland, Oktoberfest is celebrated over Labor Day weekend. The dates for 2022 are September 2-5, with an additional two days added this year September 9-10.

Where is Oktoberfest in Cleveland?

Things to do at Oktoberfest in Cleveland

There are a TON of events going on during Cleveland’s Oktoberfest in Ohio. Here are the main things that you shouldn’t miss during your time at Oktoberfest.

Between the Paulaner Tent, Bier Garten, Hacker-Pschorr Tent, and the International Pavilion, there are polka bands, German dance groups, and other live music to enjoy every day. There’s even a Pink Floyd Tribute Concert happening this year, along with fireworks on Step. 4th.

You can find the full entertainment schedule for 2022 here.

I mean this is obvious, but there is nothing like sitting in the Paulaner Tent or Bier Garten with a traditional German beer and listening to the live performances.

Sausages, schnitzels, pretzels, and even classic Cleveland pierogies are on the menu at Oktoberfest Cleveland. Over 20 different vendors will be serving up all sorts of German goodness.

Join in on the Great Lakes 5K Beer Run that takes place on Labor Day, cheer on your favorite small doggo at the wiener dog races, watch the Masskrugstemmen German Strong Man Competition, and see who gets crowned as Miss Oktoberfest.

5. Listen for the Cleveland Glockenspiel

This clock-like stage goes “off” on the hour with music starting up from the clock. Watch the performers sing, dance, and perform skits on the largest glockenspiel in the US.

There is also an arts and crafts market selling everything from jewelry to paintings and so much more!

The Frisch Marionette Company puts on a delightful puppet show for the kids during Cleveland Oktoberfest.

What beer should you drink at Oktoberfest?

In all seriousness, though, there are a lot of traditional German beers to choose from. Some beers to check out include Paulaner’s Hefeweizen, Oktoberfest Marzen, Munich Lager, or Salvator. Then try some Hacker-Pschorr Oktoberfest or Dark beers, and definitely try the local microbrews on offer during the Oktoberfest Microbrew Competition.

If beer isn’t your thing, then Jagermeister is available as well as Schloss Zell German wine. And, if you prefer not to drink alcohol, Wild Bill’s Root Beer, lemonade, and Coke products are for sale, too.

How much time should I spend at Oktoberfest Cleveland?

That all depends on you, but one full day is plenty of time to see the main attractions and enjoy the delights of this celebration. If there are specific events you wish to attend, then make those days a priority for when you go.

Tickets for the event sell as either 1-day or 2-day passes.

How much does it cost to attend Cleveland’s Oktoberfest?

2022 Cleveland Oktoberfest tickets start at $16 for a 1-day ticket, or cost $25 for a 2-day ticket. You’re encouraged to purchase tickets in advance online (which do come with an additional $1.50 service fee per ticket).

The event also offers VIP tickets, which include 1-day admission with exclusive access to the Jagermeister VIP Tent, catered food, VIP access to the Bier Garten, a 1L stein you can have filled up to 5 times, and more. These tickets are $90 online.

How to celebrate Oktoberfest on your own in Cleveland

Not really interested in attending the official Cleveland Oktoberfest event this year? Well the good news is that you can still have your “own” Oktoberfest in Cleveland!

With German breweries and restaurants in the Cleveland area, there are ample ways to find the spirit of the famous Germany Oktoberfest without going to the actual event.

If you’re craving the traditional bratwursts and German beers that are ever present at Oktoberfests worldwide, then you’ll definitely want to check out these restaurants and breweries in Cleveland.

Hofbrauhaus is the next best thing to actually going to Oktoberfest itself. With people standing on benches and swinging liters of beer as they bob side to side singing along with the polka band and servers dressed in their best lederhosen and dirndls, you can experience the feeling of Oktoberfest year-round.

Modeled after the original Hofbrauhaus in Munich, this place aims to mimic the 400-year old beer hall from its decor to its beer. Following the Bavarian Beer Purity Law from 1516, their beers are brewed with only 4 ingredients: water, barley, hops, and yeast.

As far as what to order at Hofbrauhaus, their Dunkel, Hefeweizen, and Lager are always great beers. They also have a seasonal beer on tap, as well as the Hopfen Special, or brewer’s special. No matter which beer you choose, ordering a liter of it is a must!

For food, I recommend the pretzels with bier cheese, potato pancakes, bratwurst on a bun, wurstplatte with Vienna style frankfurter, pork sausages, chicken sausage, sauerkraut, mashed potatoes, and some schnitzel.

They also have a large bier garten outside that is perfect for the lovely autumn weather, and definitely one of the best patios to visit in Cleveland!

Known as Cleveland’s oldest and most authentic German restaurant and bier garten, this place is serving traditional Bavarian food with an American twist. They serve 40 German beers, 30 Belgian beers, and several American craft brews as well!

To get in the Oktoberfest spirit in Cleveland, I recommend ordering the Paulaner Oktoberfest Märzen or Hofbrau Oktoberfest on tap, or any of their many other German beers.

For delicious food, check out their German potato salad, potato pancake reuben, or even chicken paprikash.

With an American take on European-inspired cuisine and another great bier garten, this is the place in Parma for Oktoberfest.

Order up a German beer like Paulaner or Weihenstephaner Hefeweizen and some curry wurst (spicy sausage with curry sauce), one of their many schnitzels or spaetzles, or a bratwurst sandwich and enjoy it out in their bier garten!

Last, but certainly not least, is Hansa. This brewery serves up its own take on German beer as well as food. Plus, there is a specialty German shop next door called Hansa Import Haus that sells everything from German candies (like Haribo and Kinder bars) to German sausages, beers, and wines.

If you’re hungry, be sure to snag a sausage platter, wiener schnitzel, or hackbraten (German meatloaf), and save room for homemade cherry strudel for dessert!

There certainly are some fantastic German restaurants and beer halls in Cleveland, but if you prefer to celebrate Oktoberfest either at a brewery or at home, luckily there are several Cleveland breweries selling their own German beers!

Be sure to pick up a pack of these beers to enjoy Oktoberfest in Cleveland:

RELATED: The Ultimate Guide to the Best Beers and Brews in Cleveland

Most breweries in and around the Cleveland area have some sort of German beer on tap this time of year or are selling it in stores. So, pick some up and throw your own Oktoberfest celebration!

As a bonus, put on an Oktoberfest playlist on Spotify or Pandora and pretend you’re celebrating Oktoberfest in your living room! This playlist is a great place to start, and includes songs that are traditionally played in the beer tents in Munich.

The spirit of Oktoberfest season is upon us in Cleveland, and there are some incredible ways to celebrate. Whether it is cracking open an Oktoberfest beer from a local brewery or dancing to polka at Cleveland Oktoberfest, you’ll enjoy the charms of this German celebration right here in Ohio. Prost!

What is your favorite thing to do to celebrate Oktoberfest in Cleveland?