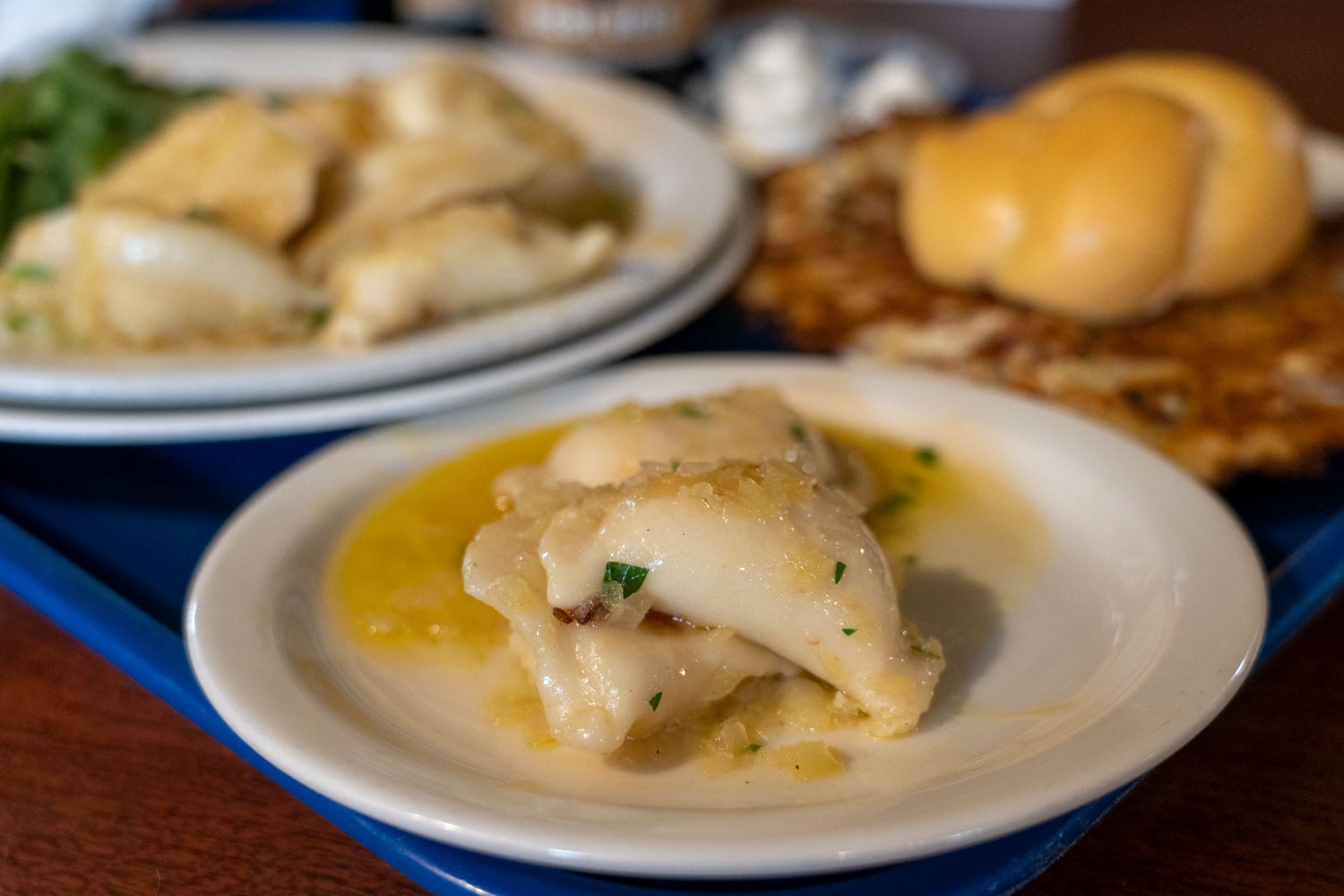 If you ask Clevelanders about which food(s) they consider to be local specialties, chances are they’re going to name things like Polish boys and paczki – and of course pierogi.

None of these foods originated in Cleveland, of course; they were all brought here from various parts of Eastern Europe as people immigrated to the city throughout the late 1800s and early 1900s from countries like Poland, Ukraine, the Austro-Hungarian empire (Hungary now), Slovakia, and more.

The food traditions brought by those immigrants have survived and thrived in Cleveland, and today are some of the city’s most popular dishes.

What is a pierogi?

Many cultures around the world have a food tradition of dumplings. In Eastern Europe, these pillowy pockets of deliciousness are called pierogi (or pierogies, depending on who you ask).

Traditional pierogi are usually made from a noodle dough and filled with potato (and sometimes cheese), boiled, and then served up slathered in butter and cooked onions.

You can find plenty of traditional pierogi throughout the Cleveland area, but you can also find some inventive takes on them.

No matter what kind of pierogi you prefer, chances are you can find them in Cleveland.

The best pierogi in Cleveland

In Cleveland, many restaurants serve a version of pierogi. I haven’t tried them *all* (yet), but I have eaten my fair share of these delicious dumplings in order to identify the very best pierogi in the city.

Food is of course quite subjective, so my list of favorites might not exactly match yours – but if you’re looking for really good pierogi in Cleveland, this list is a great place to start!

Here are my favorites in Cleveland and the surrounding neighborhoods:

1. Pierogi at the Little Polish Diner

The neighborhood of Parma has long been home to a large Polish population, and has a designated Polish Village with several Polish restaurants and bakeries. The Little Polish Diner is a well-known spot in Parma and the Greater Cleveland area, and in my opinion serves up the best traditional pierogi.

The pierogi: The pierogi here are exactly what I think of when I think of pierogi: soft but not too soft, covered in butter but not swimming in it, and served with a side of sour cream. I tried the traditional potato and cheese-filled pierogi, and the filling was flavorful and delicious.

The setting: The Little Polish Diner is indeed little; it only seats a total of 21 people (16 at tables and 5 at the small bar), and does get crowded, especially on Saturday afternoons. Nothing about the diner is fancy, but the food is some of the best.

Good to know: You can call in orders for pick-up, too, and they serve up lots of classic Eastern European dishes like stuffed cabbage, kielbasa, and more.

Jukebox has Kat’s favorite pierogi in Cleveland, so I knew I had to get over to this neighborhood bar to try them for myself. Jukebox doesn’t serve “traditional” pierogi (no butter baths or boiled dumplings here), but I think that’s part of what makes them so good!

The pierogi: Jukebox has a full pierogi menu, with 8 different types of pierogi to choose from, along with a dozen different dipping sauces. While these pierogi are served with grilled onions, they’re almost more of a finger food than something you need to eat with a knife and fork. My favorites here are actually the vegan buffalo chickpea pierogi, and Elliot and I also enjoyed the potato bacon ones.

The setting: Jukebox is an Ohio City neighborhood bar with a jukebox (duh) and a great bar staff. They serve up a bunch of tasty bites beyond pierogi, and also have an extensive beer list and some good cocktails (the Tony-rita is famous here).

Good to know: They update their jukebox catalog every month!

3. Pierogi poutine at The Rowley Inn

The Google listing for The Rowley Inn in Tremont describes it as a “neighborhood watering hole since 1906.” Its website adds that it’s “a place where you can drink at 7 am and not be judged.” I say that it’s a fun place to stop for a drink – and of course some pierogi!

The pierogi: The Rowley Inn serves up a couple different kinds of pierogi. Favorites include a pierogi poutine (pierogi covered in cheese curds, gravy, and onions), and a traditional kielbasa and pierogi dinner. They also have a special called the Loko Moski, which is pierogi topped with a burger patty, onions, eggs, and gravy. I’ve had both the pierogi poutine and the Loko Moski, and while neither will win any beauty contests, both are delicious!

The setting: The Rowley Inn still feels like a neighborhood bar – but not one of those with sticky floors and a shady atmosphere. This is a fun place to grab a drink and some really good local food.

Good to know: The Rowley Inn is located across the corner from the A Christmas Story House in Tremont! They can also do vegan pierogi.

This east side spot is known for having some of the best, most authentic German food in Cleveland. And even though pierogi isn’t usually considered “German” food, you’ll still find them on the menu here alongside sauerkraut, sausages, schnitzel, and a huge beer list.

The pierogi: Der Braumeister’s pierogi are on its Starters menu. They are ricotta, potato, and cheddar pierogi that are lightly deep fried and served with applesauce and sour cream. These pierogi are really good; slightly firm and crispy on the outside while still being nice and soft on the inside.

The setting: You’ll feel like you’ve walked into a Bavarian bar as soon as soon as you enter. Der Braumeister has a bar and then two separate dining rooms, one of which has a huge mural of Neuschwanstein Castle on the wall. You can sit at a table, or in a cozy wooden booth.

Good to know: They also do Saturday brunch, and have some outdoor patio space in front of the restaurant.

5. Rotating pierogi at The South Side

If you’re looking for a spot with a great patio and good vibe in Tremont, then The South Side is it. Not only is the space great (especially in the warmer months), but they serve up a lot of locally-sourced food, too.

The pierogi: The South Side’s menu changes frequently based on what’s in-season and what the chef feels like whipping up. But there’s a good chance you’ll find pierogi of some sort on the menu. I’ve tried mac and cheese pierogi here, along with sweet potato pierogi. They’ve also even done “breakfast pierogi,” which they fill with egg, cheese, and sausage and then deep fry.

The setting: Like I said, this spot has a great patio (one of our favorite patios in Cleveland!) and is especially nice during the warmer months.

Good to know: The South Side does a great brunch on the weekends, and on Sundays serves the $25 Mother Mary Bloody Mary, which has to be one of the most over the top Bloody Marys served in Cleveland.

Immigrant Son is a new brewery in Lakewood, Ohio, that serves up traditional and globally-inspired beers (they describe their beer style as “old world meets new world”). They also have a unique food menu serving up everything from mussels to lángos (a traditional Hungarian fried bread) to, yes, pierogi!

The pierogi: Immigrant Son has one pierogi dish on their dinner and brunch menus; it’s a starter, and it’s listed as “House Pierogi.” This pierogi is actually one giant house-made dumpling filled with potato and sharp cheddar, then pan-friend and topped with onions and créme fraîche. The pierogi is tasty, and is definitely share-able!

The setting: The Immigrant Son dining area is large and open, with a bar at one end but table service throughout the brewpub.

The pierogi: Market Garden usually has some sort of pierogi its Shareables menu. These are usually a traditional cheddar and potato pierogi, served with some sort of topping that often changes seasonally. (Note: Their beer cheese pierogi are what’s in the photo above.)

The setting: Market Garden is a great brewpub with lots of space, cool decor (including a ton of atmospheric chandeliers), and a really good menu year-round. Their beer garden out back is also one of my favorite Cleveland patios when the weather is nice.

Good to know: The menu changes here pretty frequently – but you’re pretty much guaranteed to find some type of pierogi on the menu.

Prosperity Social Club is a cool, retro-inspired bar in Tremont. It’s a relaxed, no-frills sort of place, but serves up some pierogi dishes that I felt deserved a spot on this list!

The pierogi: During the week, Prosperity offers 3 types of pierogi on its dinner menu: potato, farmhouse cheese, and loaded potato. But it’s weekend brunch menu is what I came for. On weekends, you can order a Polish Breakfast, which comes with fried pierogi, smoked kielbaski, and scrambled eggs.

The setting: Prosperity Social Club isn’t an actual social club; in fact, it’s a completely unpretentious spot with vintage vibes. It has a “kitschy game room” indoors, and a retro vacation-themed patio for use during the warmer months.

Good to know: It’s only open after 4 pm on weekdays.

Located inside the RollHouse Entertainment complex, Dick & Alice Sausage and Pierogi Haus is a great option for anyone looking for some quick pierogi or local sausage.

The pierogi: Dick & Alice serves up local Parma pierogi from Perla Pierogies. There are about half a dozen flavors to choose from, and they’re served in the traditional way with butter, onions, and sour cream. The pierogi are cooked to order and very good!

The setting: It’s a counter service set-up, but there are tables for dining in (and sometimes table service; I think it depends on when you go).

Good to know: Their sausage sandwiches are also good, and you can always order pierogi as a side.

RELATED: 15 of the Best Vegetarian and Vegan Restaurants in Cleveland

This of course isn’t an exhaustive list; there are so many places to find pierogi in Cleveland! These are just some of my personal favorites, in most cases backed up by others who also love these Polish dumplings.

But in case you need even MORE pierogi guidance, here are other places you might want to check out in the Greater Cleveland area:

Other noteworthy spots that serve pierogi

Places to get carry-out pierogi

If you’re in the mood to eat your pierogi at home (or freeze them for later), here are a handful of places you can buy pre-made pierogi year-round:

And of course there are several churches and other cultural associations that make and sell pierogi throughout the year, too!

Who’s ready to go on a pierogi crawl in Cleveland? Where does your favorite pierogi come from? 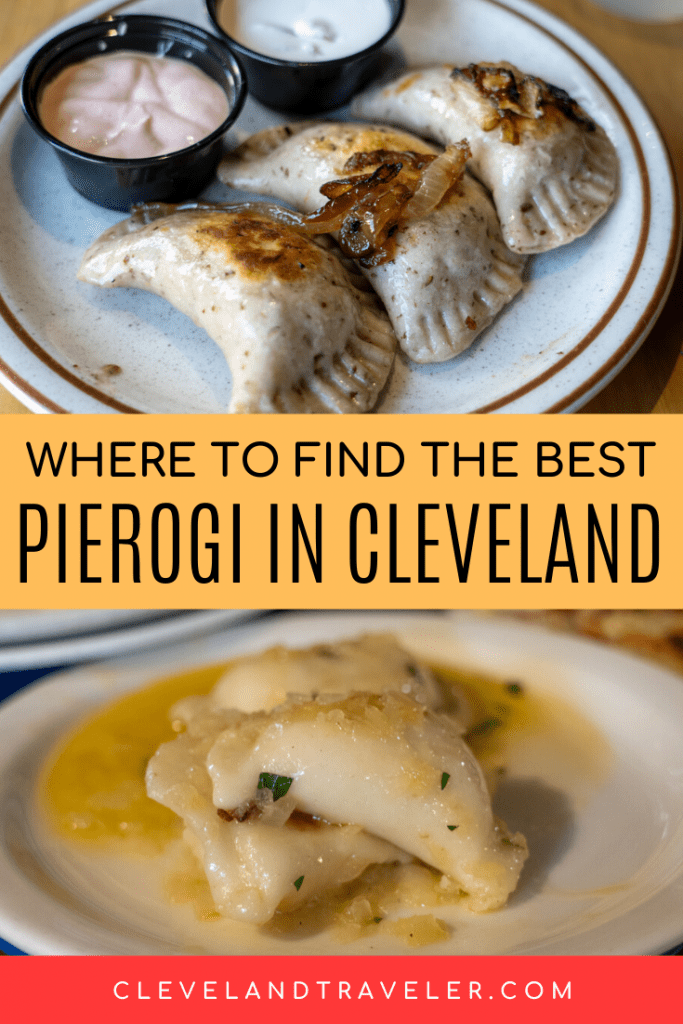