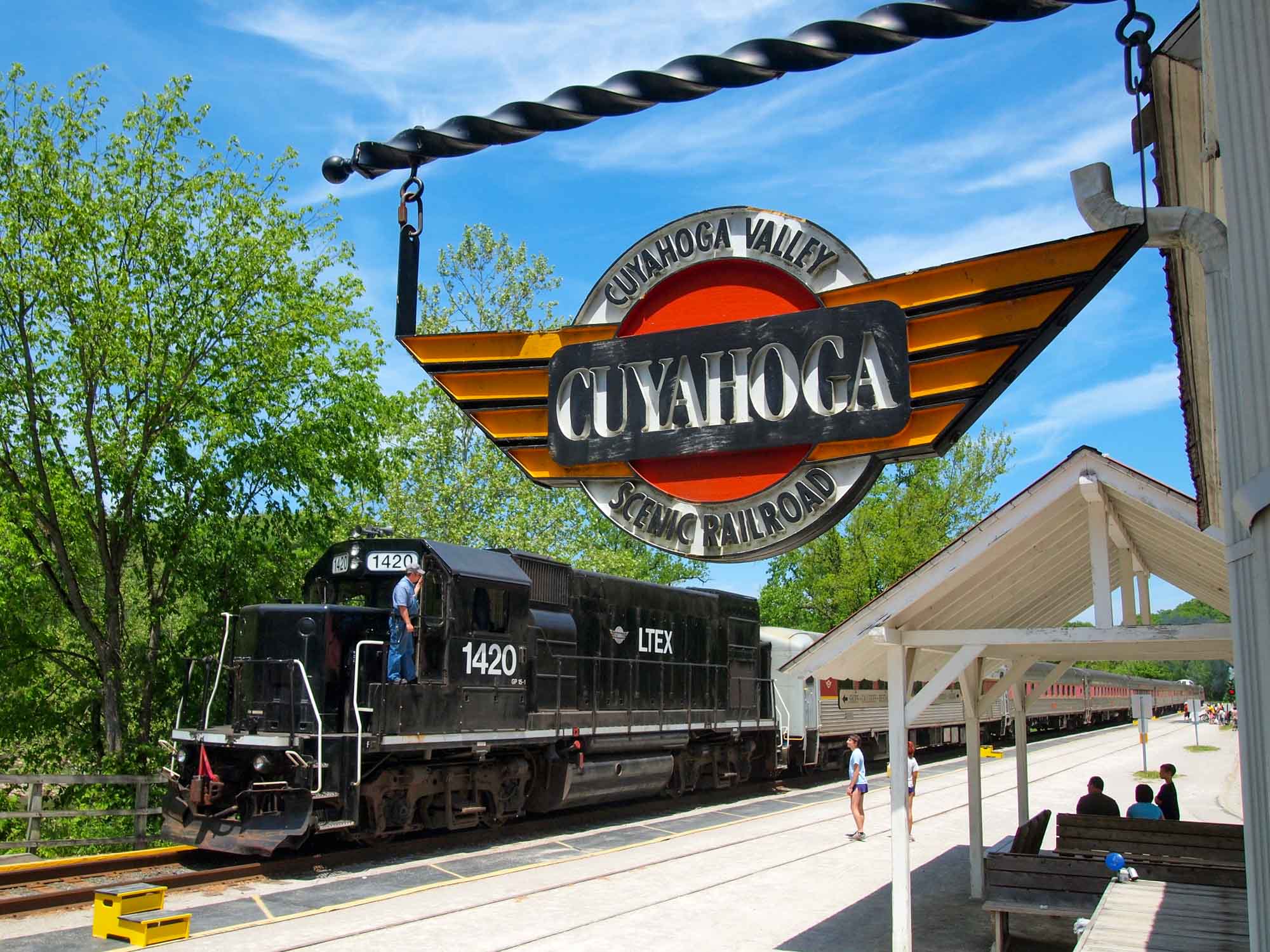 Did you know that Ohio has several national park sites? Okay, there is one official national park, but there are also plenty of national monuments, memorials, historical parks, historic sites, and even a national scenic trail. In short, there are a LOT of cool National Park Service sites to visit in Ohio!

While in total there are 13 official National Park Service sites across Ohio, there are 7 that you can easily enjoy on a day trip from Cleveland.

So for the history lovers, adventure seekers, or national park enthusiasts, here are the 7 Ohio national parks you can visit from Cleveland!

Ohio National Parks You Can Visit From Cleveland

Cuyahoga Valley National Park is the only official national park unit in the state of Ohio. This national park is located between Cleveland and Akron, and is known for its beautiful lookout points, stunning waterfalls, fun hikes, a scenic railroad, and so much more.

You could spend quite a lot of time exploring the ins and outs of this national park (we still are discovering new things!), but if you’ve got a long weekend in Cleveland, you could hit the highlights (like Brandywine Falls and the Virginia Kendall Ledges), hike the best trails, and explore the charming spots like Szalay’s Farm & Market during your time in northeast Ohio.

CVNP was designated a National Recreation Area back in 1974, and became a full-fledged national park in the year 2000.

Driving Distance From Cleveland: 20-45 minutes depending on where you go in the park

Located on the grounds of the Mandel Jewish Community Center of Cleveland, this site was created to honor the memory of David Berger. He was one of the 11 Israeli athletes killed in the 1972 Olympics in Munich, Germany.

This memorial is dedicated to him and his fellow athletes with a sculpture of the 5 Olympic rings broken in half that symbolizes the tragedy of the event and the end of the Munich Olympics events. There are 11 segments where the rings rest that represent the athletes who lost their lives.

The rings also point in an upward direction to signify the peaceful intentions of the Olympics and hopes for the future.

The sculpture was created by Cleveland sculptor David E. Davis, and this became a national memorial in 1980.

This was the family home of James A. Garfield, the 20th president of the United States. Located near Cleveland in the town of Mentor, you can visit this historic site and see the front porch where James Garfield greeted thousands of people during his presidential campaign.

Discover more about the 20th president, his family, and the people in their lives through exploring their house, reading diary excerpts and letters, and learning about important events around his life and presidency.

This became a national historic site in 1980.

This historic site that was established in 2000 consists of two properties. The first is former First Lady Ida Saxton-McKinley’s home, and the other is a visitor’s center with exhibits and a film.

Way back when, when President George Washington became the first president, people had no clue what to call the First Lady. Lady Ladyship? Presidentress? It may have been a confusing role, but it has certainly evolved to comprise many duties.

The role of First Lady has changed over the years, and has become an influential role in the history of the country. Visit this historic site to learn how this role has become what it is today, and to learn about famous first ladies.

This national scenic trail runs through 7 states from North Dakota to New York, with Vermont being added soon. It passes through many parts of Ohio, but the closest place to hop on the trail near Cleveland is in Zoar on the Buckeye Trail!

The North Country National Scenic Trail gives you the opportunity to witness ancient lakes and streams from over 10,000 years ago as well as hike in scenic valleys and hills. The landscape varies by state, but you can witness prairies, rushing water, beautiful foliage, and so much more!

Check out the North Country Trail Association for maps and trails to hike in northeast Ohio. This was designated as a national scenic trail in 1980.

Located on an island in the middle of Lake Erie is this national memorial. This monument was built to honor those who fought in the Battle of Lake Erie in the War of 1812. It also celebrates the longstanding peace between the US, Canada, and the UK.

The memorial is basically one giant column that’s 352 feet tall. You can ride an elevator to the top of the column, and on a clear day you can see Canada from the top . Also, as a fun fact, this is the longest undefended border in the world at 5 miles long.

There’s also a visitor center near the memorial where you can learn more about the Battle of Lake Erie, and Commodore Perry who the column is named after.

Driving Distance From Cleveland: 2 hours with a ferry crossing

This historic site certainly has a dark and murky past, as not only was it a battlefield and where the US was able to fend off the British from the southern Great Lakes Region, but it resulted in the displacement of Native Americans in Ohio.

Other National Parks in Ohio

While these are the national park service sites that you can visit as a day trip from Cleveland, they certainly aren’t the only sites in the state of Ohio. Here is a list of the other 6 national parks in Ohio to check out too!

Located in Dayton, this park offers insight into the Wright Brothers and Paul Lawrence Dunbar and their accomplishments in aviation. This became a national historical park in 1992.

Included in the national historic park above is the heritage area, which was dedicated in 2004. Discover the history and tradition of flying in the birthplace of aviation.

Witness earthen mounds built by the Hopewellian Native Americans that occupied the land 2,000 years ago. This was made a national historical park in 1992.

This 4,900-mile trail passes along the Ohio River in southern Ohio. It follows the routes that Lewis and Clark took on their expedition including the preparatory parts, which includes the part in Ohio. This was established as a national historic trail in 1978.

Located in Cincinnati, this is where President William Howard Taft was raised. Recognized as a national historic site in 1969, this house is the place to learn about the history of the 27th US president.

READ NEXT: 10 of the Best Day Trips from Cleveland

And there you have it: the complete Ohio national parks list, and info on what you’ll find at each one. We hope you get out and explore all the national park service sites that Ohio has to offer!

Which national park in Ohio would you most like to visit?