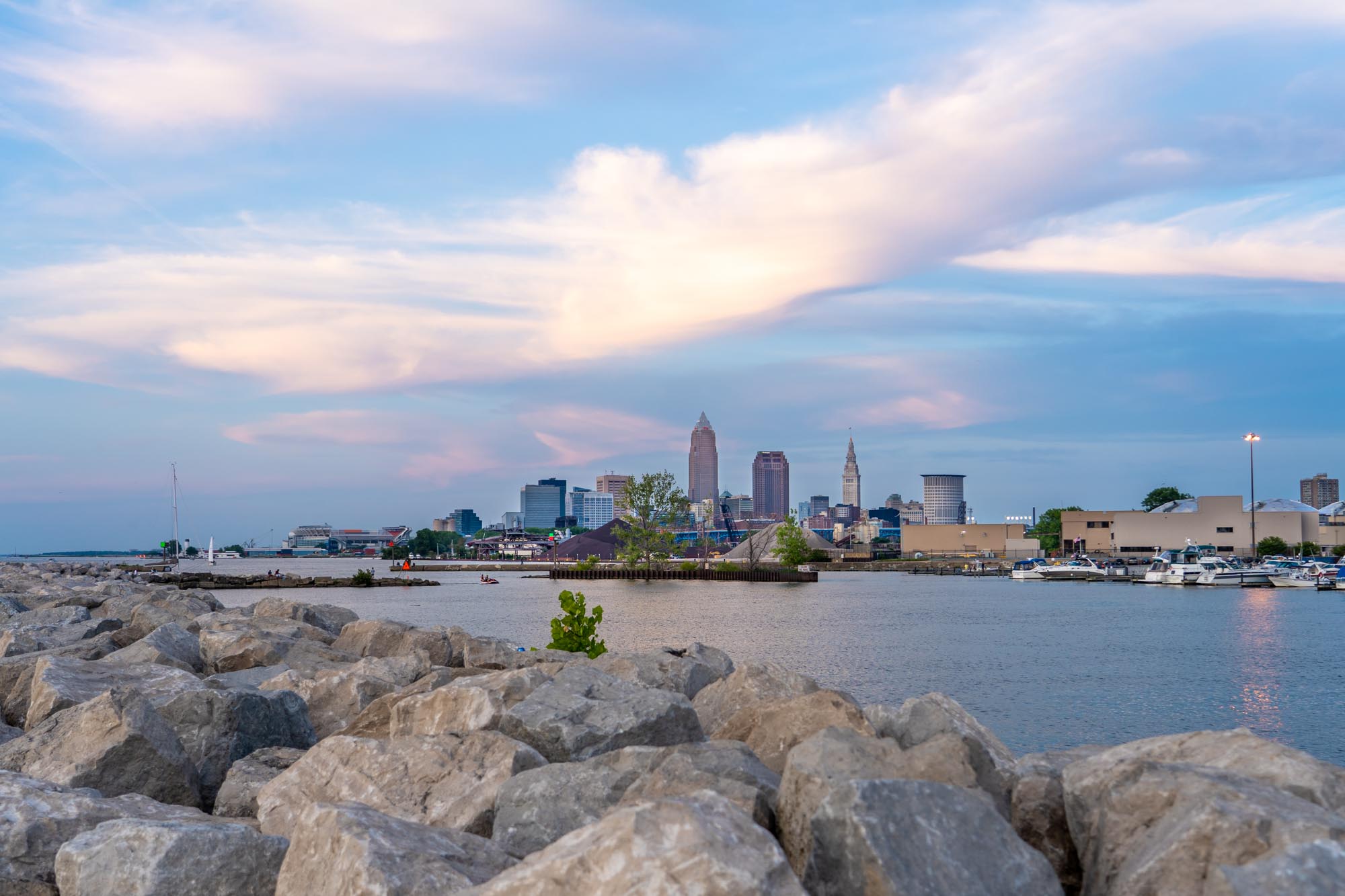 When it comes to visiting any city, I always like to find my way to a point where I can get a good skyline view – I’m a sucker for interesting vantage points.

And Cleveland actually has some really cool vantage points from which you can get good skyline views!

I’ve rounded up my top five Cleveland skyline views here. There are, of course, others to be found, but these are my favorites, and also the easiest ones to access.

My personal favorite skyline view is the one you get from Voinovich Bicentennial Park at North Coast Harbor. The park itself sits right on Lake Erie, and the skyline view includes the Rock and Roll Hall of Fame and Great Lakes Science Center, plus one of the Cleveland script signs.

I especially love this view at dusk, as all the city lights start to come on. If you visit before the Oasis Marina is filled with boats for the summer, you can get some lovely reflection shots here.

This park is generally pretty lively at all hours, but usually not ever packed.

If you’re looking to get an elevated skyline view that you can drive to, Superior Viaduct is the spot to go. This elevated street connects to W. 25th Street, and overlooks Irishtown Bend and The Flats.

Most of the Viaduct is lined with businesses and apartments, but the space at the very end (past Luca Italian Cuisine) is empty, and offers up some interesting views. You can see the Cuyahoga River, Heritage Park, and most of Cleveland’s iconic skyscrapers.

This is also one of our favorite places to fly our drone because of everything you can see!

Speaking of The Flats, there are several spots along the Cuyahoga River that offer up some excellent downtown skyline views. Most of these are ground-level (that is, after all, why The Flats are called The Flats), but you can still find some lovely views across the river towards downtown.

A less-obvious place I like to go for skyline views is the Hope Memorial Bridge. This bridge (known originally as the Lorain–Carnegie Bridge) is an Art Deco truss bridge that today connects downtown to Ohio City.

The Hope Memorial Bridge is famous for the 8 Guardians of Traffic that “guard” both ends of the bridge in pairs of two. These massive sculptures were designed by sculptor Henry Hering and architect Frank Walker, and were installed when the bridge was built from 1929-32.

The bridge spans more than a mile over the Cuyahoga River, and offers up several unique skyline vantage points – many of which can include one of the Guardians.

I like to head to this spot in the evening, when the setting sun illuminates both the downtown skyline and the faces of the west-facing Guardians of Traffic.

If you want to get several of Cleveland’s bridges in your skyline shot (did you know we have more than 330 bridges in the Cleveland area??), head for the Cleveland script sign along Abbey Ave. in Tremont.

This vantage point sits along the Towpath Trail, almost under the George V. Voinovich Bridges. The spot also probably has the most easily accessible parking, with a free lot located across the street from the sign.

There are some info boards at this little park that tell you a little about what you’re looking at, which includes the skyline, the river, and several bridges.

Probably the most often-shared Cleveland skyline view is the one that can be captured from Edgewater Park – especially the view at the top of the park near the Cleveland script sign, which includes Edgewater Beach and the skyline behind the sign.

This is a popular spot for sunrise photography, too.

You can also get good skyline views from other spots in Edgewater Park, including from Edgewater Pier.

You can also find some decent views of the skyline at Lakewood Park. The skyline here is quite small on the horizon, but it still makes for a nice photo – and the park here is one of the best in the Greater Cleveland area.

I would suggest visiting this park in the second half of the day, as the sun shines on the city (instead of from behind it) the closer to sunset you get.

And speaking of sunsets, you can watch some amazing ones from the Solstice Steps at Lakewood Park.

Once last interesting skyline view is from the terrace level of the James A. Garfield Memorial in Lake View Cemetery. On clear days, you can get great Cleveland skyline views from the outdoor terrace on the upper level of the monument memorial.

Seeing this view does require you to climb some steps, and the memorial is not open year-round, so just keep that in mind!

And, of course, like I mentioned above, these aren’t ALL the skyline views you can find in Cleveland. There are also rooftop bars, downtown hotels, and other spots around the city that offer interesting views of the Cleveland skyline.

The ones included here are some of my favorites, and are also all outdoors and free for anyone to visit.

Where are your favorite spots to get skyline views in Cleveland?