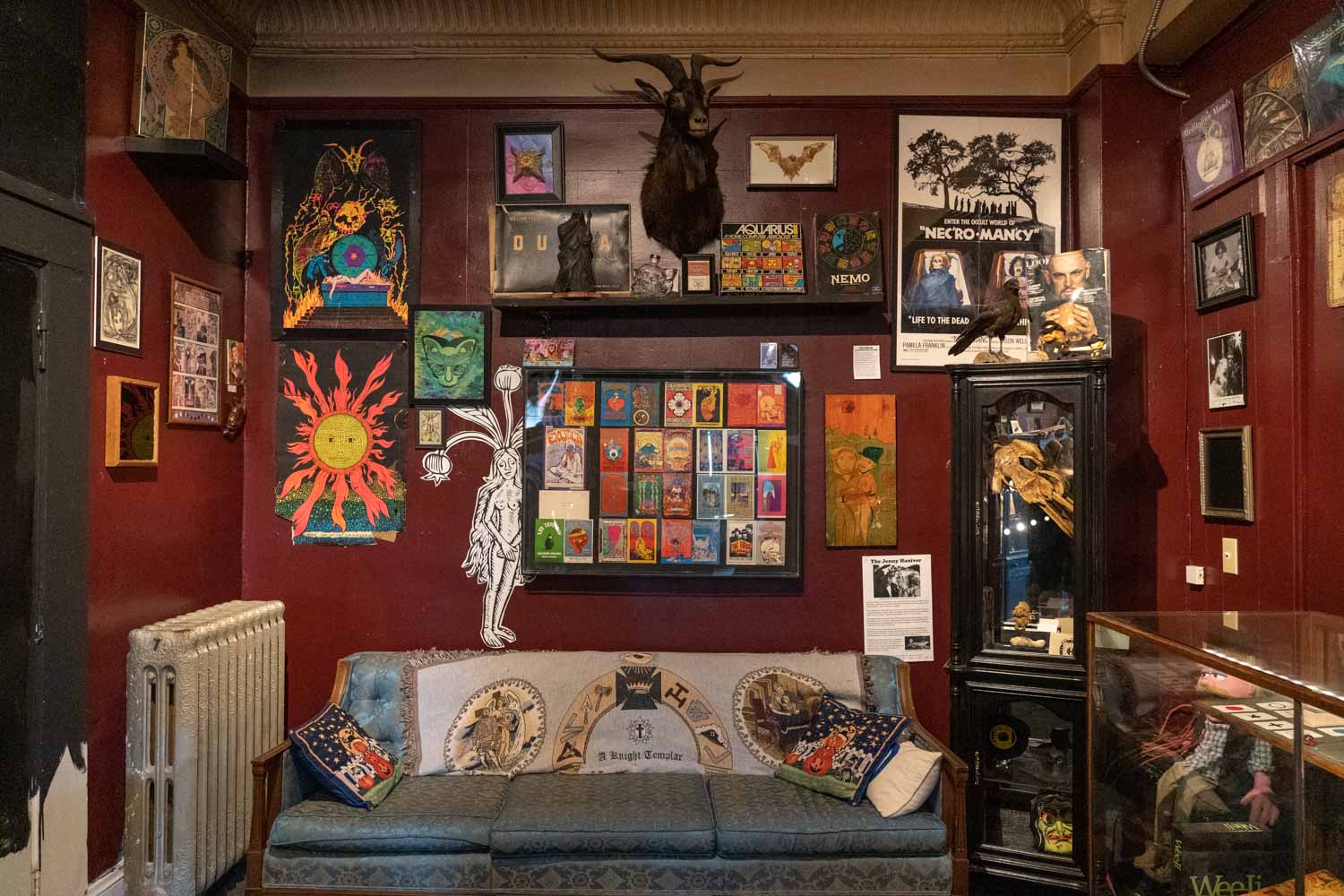 Please note: The Buckland Museum of Witchcraft & Magick IS open to the public, but tickets for timed tours must be purchased in advance. Tour spots are limited, and masks must be worn at all times in the museum. Learn more and book your tickets here.

When it comes to museums in Cleveland, the city has all the “usual” institutions you’d expect to find in a big city: we have our art museums, a history museum, and a science museum. And of course the Rock and Roll Hall of Fame.

But beyond the big, famous museums, Cleveland also has some smaller museums that are perhaps even more interesting for their uniqueness. Museums like the Buckland Museum of Witchcraft & Magick, now at its new home in Cleveland’s Old Brooklyn neighborhood.

The Buckland Museum of Witchcraft & Magick is exactly what it’s billed as: a museum dedicated to the history of witchcraft (Wicca) in America, as told through items collected by Raymond Buckland.

An introduction to Raymond Buckland

Raymond Buckland was an Englishman born in London in 1934. He became interested in the occult early on, and by the 1950s was corresponding with Gerald Gardner, the man considered to be the “father” of the modern Wicca movement, who lived on the Isle of Man.

Buckland and his family moved to the United States (Brentwood, Long Island, New York, to be exact) in 1962, but he traveled back to the UK a year later to be officially initiated into Wicca. Buckland was then responsible for “bringing” Wicca to the United States; he initiated his wife when he returned home from the UK, and the two soon began the first known Wicca coven in the US.

Buckland would later go on to found a new tradition of Wicca known as Seax-Wica, which is less secretive and more egalitarian in structure.

Between 1969 and his death in 2017, Ray Buckland wrote dozens of books on the subject of Witchcraft.

The Buckland Museum of Witchcraft and Magick was actually begun in 1966 after Buckland first visited Gerald Gardner on the Isle of Man. After seeing Gardner’s collection, Buckland began building one of his own, collecting items from all over the world – helped by the fact that he worked for British Airways for a time.

The museum at first was just displayed on a few shelves in Buckland’s Long Island home, but even then gained attention as being unique; it was featured in numerous magazine and newspaper articles, and even in a TV documentary.

Buckland moved to New Hampshire in 1976, and the museum moved with him. It was only open until 1980, though, when Buckland became too busy with writing and lecturing and put all the items he’d collected into storage. After that, the collection was sold. A new museum in New Orleans briefly showcased the collection in 1999, but after that it passed through several hands and many items were sold, lost, or damaged.

In July 2015, the Buckland collection made its way to Ohio, where Ray Buckland himself relocated to and lived until his death in 2017. It was finally purchased (and saved) by Toni Rotonda, who still owns it today.

The Buckland Museum of Witchcraft & Magick originally opened in Cleveland’s Tremont neighborhood in 2017, but in 2019 moved to its current location at 2155 Broadview Rd. in Old Brooklyn. It’s run by Jillian Slane and Steven Intermill, one of whom you can usually find in or around the museum during opening hours.

The current Buckland Museum of Witchcraft & Magick consists of basically one large room filled with tables and display cases showing off Buckland’s original collection, along with some new items that have been added since the museum opened in Cleveland.

The collection is just as eclectic as you might expect a witchcraft museum collection to be – you can find everything from Buckland’s own ceremonial robe to intricate jewelry to decks of tarot cards. Not everything is serious (Buckland was famous for his sense of humor), but that’s the charm of this collection.

Some items you won’t want to miss in the collection include:

Every item is labeled, and there are some information boards scattered around, too, for anyone curious to learn more about Buckland and Wicca.

I also chatted a bit with Jillian and Steven who run the museum. They’re both so nice and are always happy to talk about the collection and their favorite pieces. Neither practices Wicca themselves, but they hope to help dispel some of the stigma that surrounds it by educating people through this museum.

You can easily look at everything here in under an hour, and that’s how much time I’d recommend spending to truly appreciate it.

How much: Admission is $8

Tickets: During COVID, visits are by appointment only; purchase tickets in advance here.

The Buckland Museum also has a small shop at the front, selling things like books, crystals, jewelry and t-shirts, and often hosts special events and lectures. The day I visited, there was also a tarot card reader. Check their website for upcoming events.

Have you visited the Buckland Museum of Witchcraft & Magick?