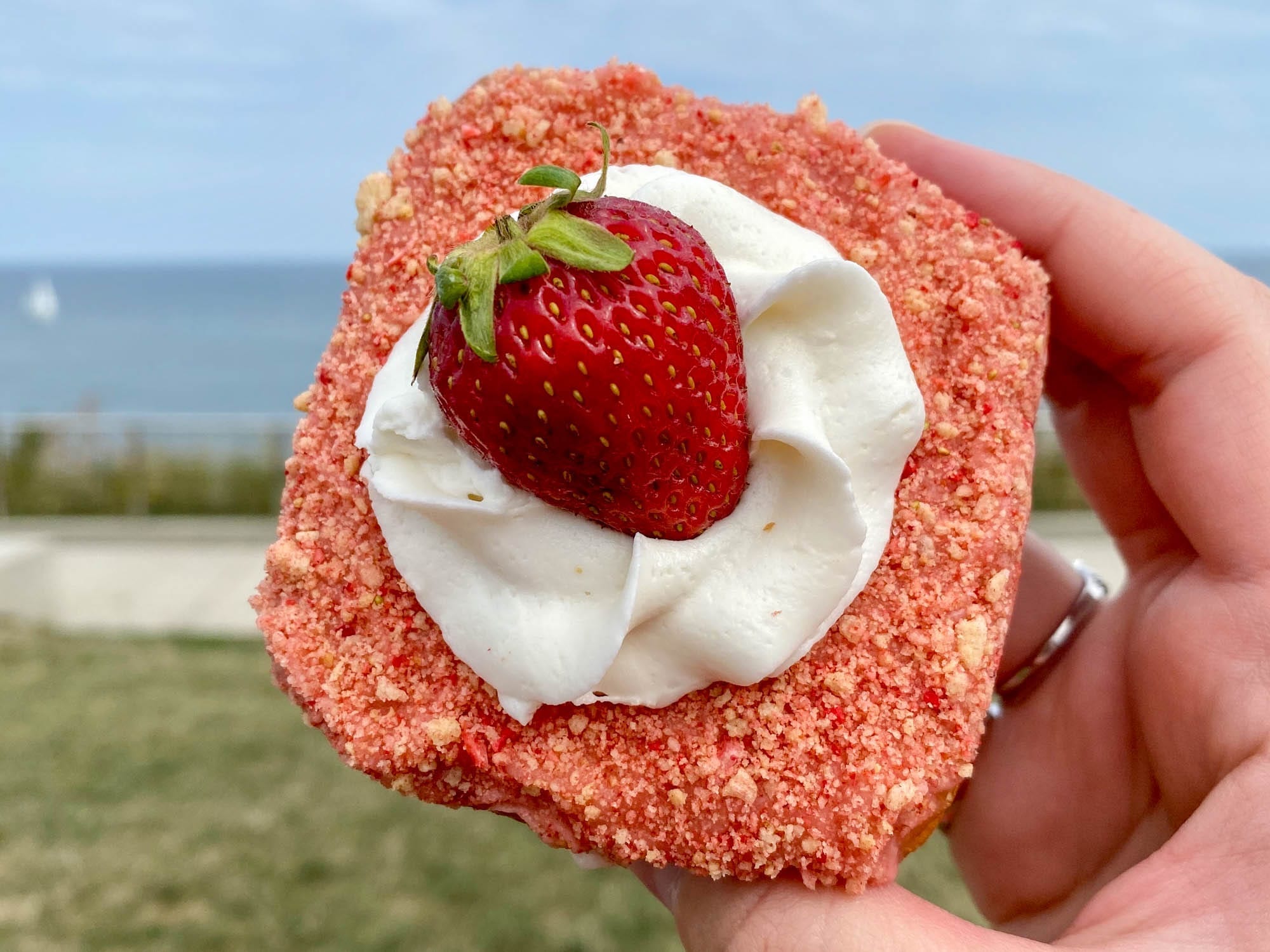 Now, I’m not an expert on what a normal donut-shop-to-resident-population ratio is, but I kind of feel like we are spoiled for choice here in the Greater Cleveland area. We have a LOT of local, independent donut shops to choose from.

Some of these shops serve up old-school, traditional donuts using tried and true recipes, while others specialized in more “modern” donuts where the flavor menu changes weekly.

No matter what your donut preferences are, you can find something you’ll love at one of these top Cleveland donut shops.

Where to find the best donuts in Cleveland

When I started thinking about writing this post, I had to set a couple basic parameters; you can buy donuts from a lot of places, but I wanted to focus on shops that really *specialize* in donuts, or *only* sell donuts.

That means I’m not including bakeries here that serve donuts alongside lots of other baked goods. This list is specifically about places in Cleveland that are known for their delicious donuts.

Note: These are ranked based on my personal tastes coupled with shop vibes/features, so obviously your opinions may not match mine – and that’s okay! I’m including all the details I can here to make it easy for you to go out and come up with your own favorite Cleveland donuts list.

Known for: Their square donuts and unique vegan flavors

Good to know: They do sell out regularly, and it’s not uncommon for them to have a line on weekends.

Prices: These donuts are not cheap! They average around $3 per donut.

The Vegan Doughnut Company has a great origin story in Cleveland. It’s run by two sisters, Kharisma and Kyra Mayo, who started out doing donut pop-ups around the city in 2017. By 2018, they had launched their brick and mortar store in Lakewood.

Now, I am not vegan (I’m not even vegetarian), but these are still my favorite donuts in Cleveland. The donuts are 100% vegan, which means they contain no dairy or eggs. They also don’t use nuts or preservatives, and try to use locally sourced ingredients whenever possible.

The Vegan Doughnut Company makes what I would call “modern” donuts, using unique flavors and decorations on their hand-cut donuts. I’ve tried more than a dozen of their flavors, and I haven’t come across one that I haven’t liked.

Their raised donuts are light and fluffy, and their fillings and frostings taste good without being too sickly sweet.

Some of their most popular flavors include lemon and lavender, maple cream filled, cookies and cream, and strawberry shortcake (the last of which is my personal favorite). They mostly make raised donuts, but do have a few cake donuts in their rotation, too.

Right now, they change up their flavor menu at the beginning of each month.

Known for: A huge variety of donut flavors

Prices: An average of $2 for regular donuts

Choosing my second-favorite donut spot in Cleveland was difficult because the next few on this list are all excellent. But I decided to go with Jack Frost.

A lot of people in the Cleveland area name Jack Frost Donuts as their very favorite donut spot, and I can absolutely understand why: with a huge selection of donut types and flavors each day, you can’t really go wrong here.

Jack Frost has been a staple in the local donut scene for nearly a century! It’s a family-run business that first opened its doors back in 1937, with a motto of “every batch from scratch.” Which makes it even more impressive to know that there could be upwards of 50 different kinds of donuts in the display case each day.

They do lots of things really well, whether you prefer cake donuts, raised donuts, or even crullers (I personally really love their crullers!).

The donut recipes here have been handed down for generations, but you’ll also find some unique modern flavors, and some really fun decorations for different holidays and special occasions.

No matter what kind of donuts you like, chances are you can find them at Jack Frost.

Good to know: They have a drive-thru, meaning you can swing by for donuts without having to leave your car!

I had a tough time deciding where Goldie’s would land on this list, but they’re landing here because their old fashioned sour cream ring donut is my favorite one in all of Cleveland.

Goldie’s is newer to the Cleveland donut scene, having only opened in 2018. But they use traditional family donut recipes, and produce some great classic donuts.

Along with having amazing sour cream donuts, I can also highly recommend their cake donuts and apple fritters. They also sell giant homemade cookies, and Dough Street edible cookie dough.

Each month, Goldie’s also has a “Donut of the Month,” where proceeds from that donut are donated to a local organization or charity.

Known for: Huge donuts made with craft beer

Good to know: They also serve coffee, beer, and cocktails (and yes, they have to-go options!)

Prices: Because these donuts are so huge, expect to pay at least $3 per donut.

Brewnuts has become a staple in the Gordon Square Arts District, and is locally known not only for its donuts, but also for its bright and friendly shop space, and its deep love and support of all things local.

Brewnuts was started in 2013 by Shelley and John Pippin. They come up with all their donut recipes from scratch – and they bake them with craft beer! They’ve built the shop into a Cleveland staple, with their signature pink boxes being instantly recognizable.

For me personally, the thing that sets Brewnuts apart is its unique menus, which change weekly. They’ve done themed weeks on everything from Harry Potter to The Office, and all the fun decorations and flavors keep me coming back.

Some favorites from Brewnuts include their maple bacon donut and strawberry sprinkle donut (which you’ll find on almost all of their weekly menus), and their classic maple cream stick. They’re also pretty famous for how much filling gets squeezed into their filled donuts!

I also love that Brewnuts gets really involved in the local Detroit-Shoreway community, and (in more normal times) hosts a bunch of fun events and collabs throughout the year.

Good to know: Go in the morning for the freshest selection.

Prices: Their donuts are around $1.50 apiece.

If you’re looking for good, old fashioned donuts and really friendly staff, then you can’t go wrong with Doughnut Pantry in Lakewood. There’s nothing flashy about the donuts or the space here, but they do what they do well.

I’d say Doughtnut Pantry probably does cake donuts the best; their blueberry cake donut is one of the best I’ve had – and I’m really picky about my blueberry donuts! They also make hand-cut cake stick donuts, which you don’t find many places.

My experience is also that the customer service is really great here, too.

Known for: Classic donuts and a long history

Good to know: Biagio’s is cash only!

Prices: Donuts are $1 each.

I know, I know: Biagio’s has both donuts AND pizza in its name. But ask any local, and they’ll tell you that this Eastlake shop is best-known for its donuts.

Biagio’s has been around for nearly 60 years; a carved plaque outside the front door says it was opened in 1963 by Biagio and Mary Cappadonna. They serve up traditional donuts, cinnamon rolls, and more in their no-frills space.

It’s still a cash-only business, and yes, donuts are just $1 each.

I personally love their fluffy chocolate cream donuts the best, but they also have really good jelly donuts, apple fritters, and glazed raised donuts. And make sure you get some coffee here, too!

Biagio’s also makes some great paczki for Fat Tuesday every year! (Paczki are sweeter, denser Polish donuts, usually with a fruit filling that are traditionally eaten before the beginning of Lent.)

The best donut chains in Cleveland

We’re NOT talking about Kristy Kreme or Dunkin’ here. These are smaller franchises, sometimes with just a couple of local locations.

Good to know: You can order these online, and can even get them delivered in some cases!

Prices: Around $2 per donut

Bigmouth Donut is a local donut company that specializes in scratch-made donuts that strike the perfect balance between traditional and modern. Their glazed raised donuts are some of the best you will eat, but then they also do some interesting glaze and frosting flavors like lemon lavender, creme brulee, and horchata.

I usually visit their Hingetown shop, which has a really fun mural inside, and is just down the block from my favorite Rising Star Coffee location.

Along with donuts, they also sell big, delicious cinnamon rolls.

Peace, Love and Little Donuts was originally founded in the Strip District of Pittsburgh in 2009. There are now locations in 14 states across America – including, of course, Ohio!

And within Ohio, almost all of their locations are in the northeast part of the state. Near Cleveland, you can find PL&LD shops in Rocky River, Avon, Strongsville, Hudson, and Concord.

Known for their snackable donuts and funkadelic vibes/decor in all of their shops, Peace, Love and Little Donuts has carved out a unique identity for themselves. AND they make really good donuts.

While they have lots of groovy flavors to choose from, all their donuts are built on a traditional cake donut base. What I love about them beyond their fun flavors is the fact that these little donuts don’t taste stale after a day; they’re perfect to dunk in your coffee a day or two after you buy them, too!

You’ll notice from my current list that I haven’t made it to every donut spot in Cleveland yet. And this isn’t because I’m purposefully leaving any shops out; I just haven’t made it to them all yet! For lists like this, I only include places I’ve personally tried.

I started with the shops closest to Cleveland, and will now work my way out.

Other local spots I plan to eventually include on this list are:

As soon as I’m able to try these shops, I’ll be sure to rank them and add them to the list!

READ NEXT: Get Your Caffeine Fix at 19+ of the Best Local Coffee Shops in Cleveland

Where’s YOUR favorite spot for donuts in Cleveland? I’d love to know about any additional shops I’ve missed!