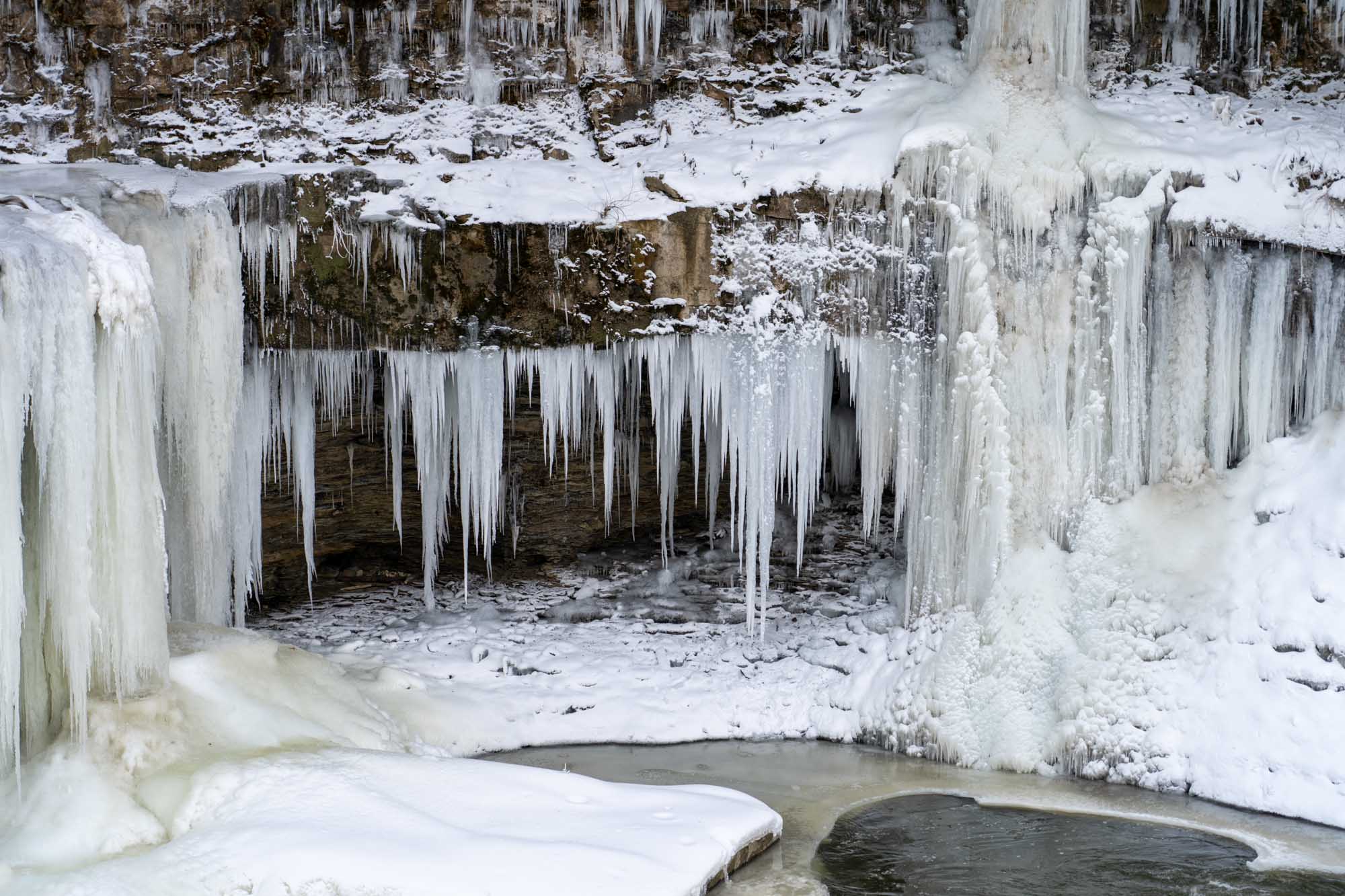 Winter isn’t always consistent here in northeast Ohio, but there are usually a few instances each season when the Greater Cleveland area experiences a cold snap long enough to freeze water in its tracks.

Lake Erie frequently ices over, and many of the area waterfalls transform into icicle-laden masterpieces. (Because yes, we actually have a lot of waterfalls in northeast Ohio!)

If you want to check out some frozen waterfalls near Cleveland this winter, first look out for a stretch of cold days. And then check out these spots for some photo-worthy wintry waterfalls.

Note: I’m only covering waterfalls that can be reached by/seen from established trails in state and national parks. There are of course more waterfalls in the area that people find and photograph, but I’m not highlighting them here since I don’t want to promote hikes that can be dangerous, or that would encourage people to trespass or use “social trails” that can harm natural areas.

The most well-known waterfall in the area is Brandywine Falls, the 65-foot-tall cascade in Cuyahoga Valley National Park. This is one of the larger waterfalls you’ll find in the area, meaning it takes a longer cold snap for it to freeze over. But when it does, man is it special!

How to see it: There’s a parking lot at 8176 Brandywine Road in Sagamore Hills Township, and then a wooden boardwalk that leads to a viewpoint overlooking the falls.

Also found in Cuyahoga Valley National Park, Blue Hen Falls is a smaller waterfall, but is set in a beautiful location surrounded by lots of trees. This waterfall is more popular in the summer and fall, but also makes a good stop during the winter.

How to see it: There’s a small roadside parking area for the train at 2001 Boston Mills Road in Brecksville. Then you take a half-mile trail down to the waterfall. Note that you’ll need good boots if it’s snowy/icy, and you should always be careful walking out onto the ice in front of the falls!

A post shared by Amanda the Cleveland Traveler (@clevelandtraveler) on Jan 22, 2019 at 5:56pm PST

The Great Falls of Tinker’s Creek can be found at Viaduct Park within Bedford Reservation. The falls aren’t huge, but they’re down in a pretty impressive gorge where you can also find the remains of mills and a stone viaduct. I also especially like the massive icicles you’ll see here hanging off the sides of the gorge.

How to see it: There’s a parking lot at Viaduct Park, at the corner of Willis Street and Taylor Road in Bedford. From there, the Viaduct Park Loop trail is clearly marked, and will lead you down to an overlook over the Great Falls.

While autumn is my favorite season to visit Berea Falls, you can definitely visit during the winter months, too, for some nice snowy scenes. This small set of tiered waterfalls is striking (in my opinion) because of the arched railway bridges that cross the Rocky River upstream.

How to see it: Park near the Berea Falls Overlook off Valley View Parkway. There are established trails that lead down to the river from the overlook, but they may not be clearly visible if there’s snow on the ground – be careful on your way down, and look out for icy patches of sandstone!

Day’s Dam Falls often gets overlooked in Lorain’s Black River Reservation – but that’s only good news for waterfall chasers! The 40-foot waterfall is beautiful in the winter months, and fairly easy to access.

How to see it: Park near the intersection of Norfolk and 31st in Lorain at the Day’s Dam Trailhead. You’ll have to take the paved Bridgeway Trail to the south for roughly half a mile until it connects to the Waterfall Trail, which is a short loop trail that leads to Day’s Dam Falls.

Cascade Park is located in the heart of Elyria, and there are two waterfalls here where two branches of the Black River cascade over Berea Sandstone. The West Falls is the larger of the two – it often appears as a triple waterfall, tumbling down 35 feet beneath the Lake Avenue bridge.

How to see it: Park in the main Cascade Park parking lot (near the playground). The Waterfall Trail begins off Park Road, and is a 1.2-mile loop trail.

The East Falls is the smaller of the two waterfalls in Cascade Park, but is still very impressive during the winter months. It’s flows right next to the remains of an old mill, too, which makes for some cool photos.

How to see it: You won’t find this waterfall on the same trail as the West Falls, though I’m told there’s a separate trail that connects the two. It might be easier to drive to the East Falls Riverwalk, which is off Kerstetter Way behind the Elyria Police Department. From here, there’s a short trail that leads to an overlook above the East Falls, and also a less-maintained trail that descends to the bottom of the falls/old mill.

This “urban waterfall” is located right in the center of the town of Chagrin Falls. The 20-foot waterfall used to power several mills in the area, but today is just pretty to look at. Chagrin Falls itself is often recognized for being a beautiful and quaint little suburb, so after you take photos of the falls, you can wander around a bit.

How to see it: The waterfall is located right in the heart of Chagrin Falls; you’ll find it marked as “Chagrin Falls Waterfall” on Google Maps, where Main Street crosses over the Chagrin River. A boardwalk and steps lead down to a viewing platform, and they’re usually decorated for the holidays.

So there you have it! Eight different waterfalls in the Greater Cleveland area that you might be able to catch frozen during the winter months!

READ NEXT: 19 Beautiful Waterfalls to Visit Near Cleveland

Do you know of any other great waterfalls in the area that freeze in the winter?