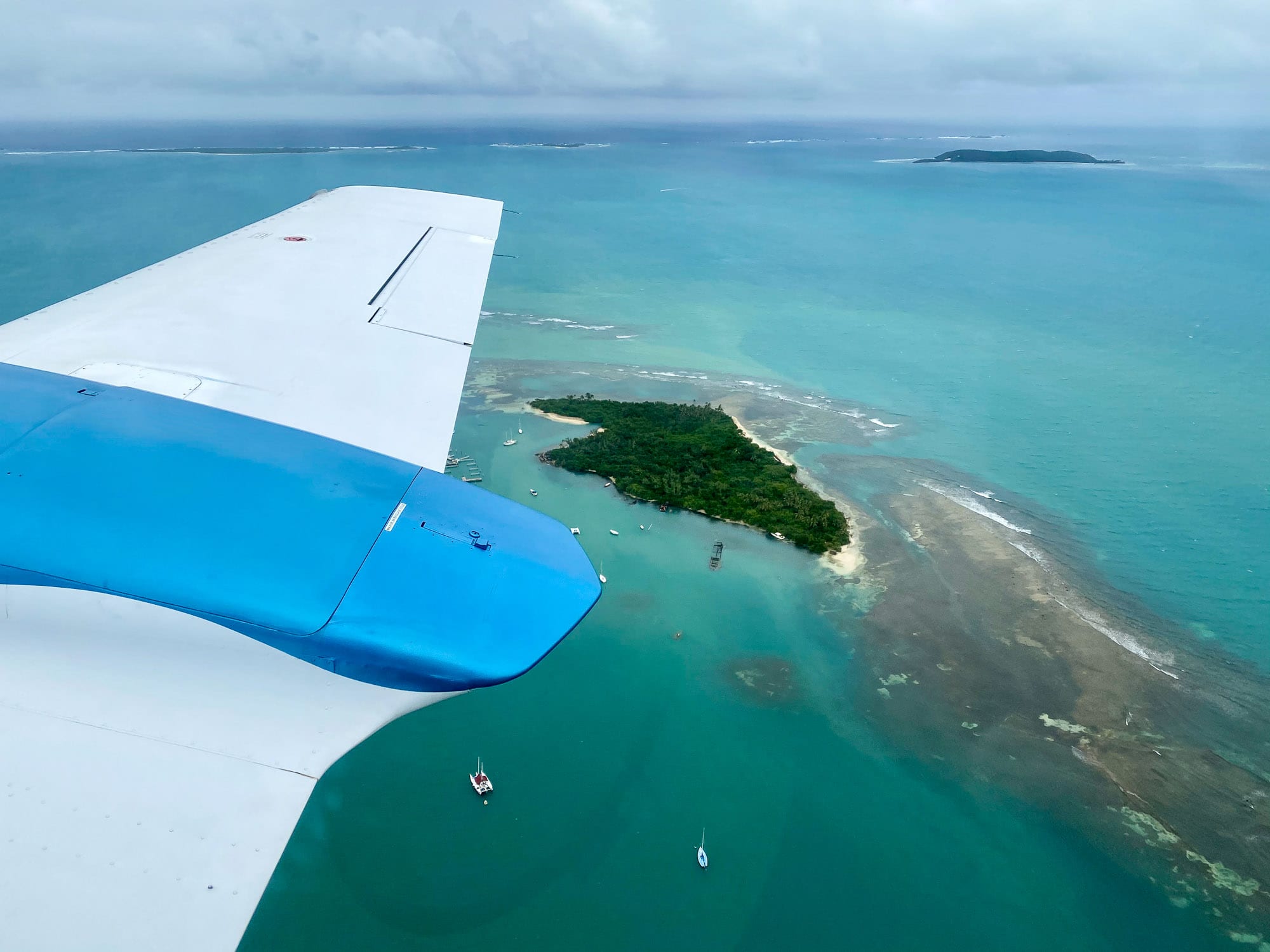 There is nothing quite like booking a direct, nonstop flight; in just a few hours, you’re in a new place and ready to explore! Because, let’s be honest, who really enjoys spending more time in airports and on planes than you really have to?

Luckily, there are plenty of nonstop flights from Cleveland Hopkins International Airport. If you’re itching for a weekend getaway or a fun vacation without spending a chunk of it on a plane, then you’ll definitely want to check out these flight options.

Since there are quite a few airlines that fly from the Cleveland airport, this is organized by international and popular locations.

A note on searching for flights: Some of the nonstop flights featured in this post are seasonal, or might only be offered a few times per week. When searching for these, head to your favorite flight search engine (Google Flights is always a good place to start), put in your flight search, and then look for options labeled “nonstop.”

Air Canada is the only airline that offers nonstop flights to Canada from Cleveland Hopkins International Airport. So if you’re hoping to enjoy the best of Toronto, including shopping and eating at Saint Lawrence Market and Kensington Market, exploring the distillery district, and visiting the CN Tower, you can definitely do that with a direct flight from Cleveland!

Direct, nonstop flights to Toronto from Cleveland take just over one hour, making this Canadian city easily accessible for a quick getaway!

For a warm getaway from a chilly Cleveland winter, nothing seems sweeter than a quick, direct flight to the stunning beaches of Punta Cana!

Frontier will you get there in just over 4 hours, giving you more time for snorkeling, sunset cruising, and exploring the charms of the Dominican Republic.

Want to escape to paradise in about 3 hours? United is now operating a flight to Nassau directly from Cleveland!

Spend your time soaking up the sun and swimming at the many beautiful beaches or even take a day trip to Exuma for the famous pigs or the chance to swim with sharks!

A much more popular direct flight from Cleveland has to be to Cancun, Mexico. With its warm, inviting waters, it’s a popular escape from chilly Cleveland winters!

Thankfully, there are a couple airlines that fly directly to Cancun from Cleveland, meaning you can be on a beach lounger and sipping cocktails in under 4 hours (and sometimes for under $100!).

Beginning in May 2023, Aer Lingus flies direct from Cleveland to Dublin, Ireland. This is the first nonstop flight to Europe since a short-lived Iceland flight in 2018.

Travelers who want to explore the Emerald Isle will be able to get there in 7-8 hours. The rest of Europe, including London, Paris, and other destinations are just a short flight away from Dublin.

Nonstop Flights From Cleveland to Florida

I was going to include these in the domestic flights list, but Cleveland has SO many direct flights to various Florida cities, that I just had to lay them out in their own section. Without further ado, here are some places you can get to directly from Cleveland to enjoy some Florida sunshine!

The land of Disney World and Universal Studios is an obvious popular choice for travelers, especially those who are fans of theme parks or have a family. This getaway is perfect for a long weekend trip or even a full week to enjoy all the parks and city itself.

Whether you want to explore the exciting city of Sarasota or you prefer to enjoy a beachy getaway to Siesta Key, Longboat Key, or Anna Maria Island, a nonstop flight here will leave you with tons of options for exploring.

This is another great spot to fly into if you want to access Siesta Key, Longboat Key, and Anna Maria Island. Tampa also has several attractions like Busch Gardens, The Florida Aquarium, and plenty of beaches nearby like Clearwater Beach.

If you want gorgeous beaches and stunning sunsets, then a flight from Cleveland to Fort Myers, Florida is just what you need. Land in Fort Myers and head to Sanibel Island, Captiva, or Marco Island for island vibes.

Also, you can fly here to check out Everglades National Park!

Whether you like deep sea fishing charters, sunset sailing, or just having the convenience of the beach being close to downtown, Fort Lauderdale is always a favorite amongst both spring breakers and those searching for warmth during a long winter.

With exciting nightlife, incredible street art, and even better beaches, Miami, Florida is an incredibly unique and fun city to explore. Luckily, a couple airlines have nonstop flights to this fun city!

Other Popular Nonstop Flights From Cleveland

A visit to the Big Apple is easy with nonstop flights with these major carriers. The flight is just over 1 hour!

You can easily make this a quick weekend getaway to enjoy the main sights of NYC including Broadway, the Statue of Liberty, Chelsea Market, Times Square, Central Park, and all of the amazing museums.

American, Delta, and JetBlue fly into either JFK or La Guardia. United flies exclusively into Newark.

The flight time online says this route is 1 hour and 15 minutes, but, after having done this flight so many times, I can tell you you’re in the air for less than an hour.

Seriously, leave after work and get to DC just in time for a late dinner! Washington, DC has so much to offer including museums, monuments, great nightlife, cool neighborhoods, and so much history.

American Airlines is the only airline that flies directly from Cleveland to the Reagan National Airport. United flies to Dulles International Airport.

Being an American Airlines hub, it is no surprise that you can reach Philly on a nonstop flight from Cleveland.

So why not explore Philadelphia for a quick weekend getaway and see the sights from the Liberty Bell to Independence Hall? And don’t forget to see which cheesesteak reigns supreme!

It’s hard to imagine an airline other than Delta flying into Atlanta, right? But yes, there are several flights to Atlanta from Cleveland on other airlines!

The world’s busiest airport is Delta’s biggest hub, so flights here are pretty much always available.

This fellow midwestern city is super easy to get to thanks to these short, nonstop flights. In just under an hour you can land and enjoy the best of Chicago in a weekend!

Take an architectural boat tour. Figure out which place really has the best deep dish pizza. Shop until you drop on the Mag Mile. Or maybe just relax on the shores of Lake Michigan! Seriously, Chicago is such a fun city to explore and easy to do so from Cleveland.

Note that Southwest Airlines flies into the Chicago Midway Airport and not O’Hare International Airport.

Whether you want to explore Phoenix and its popular surrounding suburbs like Tempe or Scottsdale, or you want to use it as a jumping off point to visiting Sedona and the Grand Canyon, this is a great place to get away for both long weekends and longer trips.

The Mile High City is a fun place to explore, from its many craft breweries to the amazing hiking nearby. So if you want to head out there for a long weekend getaway, opt for one of these three airlines that’ll get you there without layovers.

Charlotte is another American Airlines hub, so this makes sense that it is an easy nonstop flight from Cleveland.

Charlotte has a lot to offer, with vibrant street art, a thriving culinary scene, and plenty of museums, including the NASCAR Hall of Fame.

Cleveland just welcomed Alaska Airlines recently, which means getting to Seattle is a lot easier! So if you want to spend a long weekend in Seattle, now is your chance!

Some things to do during your trip to Seattle include visiting the Space Needle, exploring the famous Pike Place Market, admiring Chihuly Gardens and Glass, and wandering along the Seattle waterfront.

The Dallas and Fort Worth area of Texas is massive, so you know there is a lot to see and do here! With museums, galleries, special events, great restaurants, and more to enjoy, you can easily fill up a quick weekend getaway here.

Las Vegas is a great long weekend getaway, popular with a lot of Americans. Whether you want to take in the scenery of The Strip lit up at night and enjoy the food and entertainment Vegas has to offer, or you want to use Las Vegas as a base for trips to places like the Grand Canyon, Hoover Dam, or Valley of Fire, Vegas has something for everyone.

(Really; you can even enjoy Las Vegas with kids!)

Luckily, with these discount and regular airlines that fly there directly, you can get there quickly and save your time for enjoying Vegas.

Boston is a city with so much to offer. If you’re a sports fan, then definitely head to historical Fenway Park. If you love history? There is the Boston Tea Party Ships and Museum, the Paul Revere House, the Boston African American National Historic Site, the Old State House, and the Freedom Trail.

However, there are plenty of modern-day amenities and attractions, too, from craft breweries to fine art museums to keep you busy during a weekend in Boston.

The land of country music and famous hot chicken is a quick trip from Cleveland thanks to Southwest. So whether you want to dance to live music on Broadway or enjoy the Grand Ole Oprey, a weekend in Nashville is always a great time.

Get some sun and enjoy the exciting city of Los Angeles! And thanks to Spirit and United, you can be there in just about 5 hours.

Head to the beaches, visit the Hollywood Sign, or just explore the incredible neighborhoods in California’s most popular city.

Does northern California interest you more? Well you can also find a nonstop flight to San Francisco. There, you can explore all the different San Francisco neighborhoods (Chinatown is a must!), visit Fisherman’s Wharf, see the Golden Gate Bridge, and take a trip out to Alcatraz Island.

While this flight route operates seasonally, you can get to Myrtle Beach on a nonstop flight from Cleveland! Enjoy this beach destination that is perfect for families and great for budget travelers too.

Best Budget Places to Fly to Directly from Cleveland

While there are many nonstop flights from Cleveland, sometimes the destinations themselves can be quite expensive.

If you’re searching for a budget-friendly destination that is good for a quick weekend getaway from Cleveland Hopkins International Airport, here are a few spots to consider:

With over 10 million passengers each year, the Cleveland Hopkins International Airport may be small, but there are plenty of amazing destinations you can travel to on a nonstop flight!

Where will you travel to next?