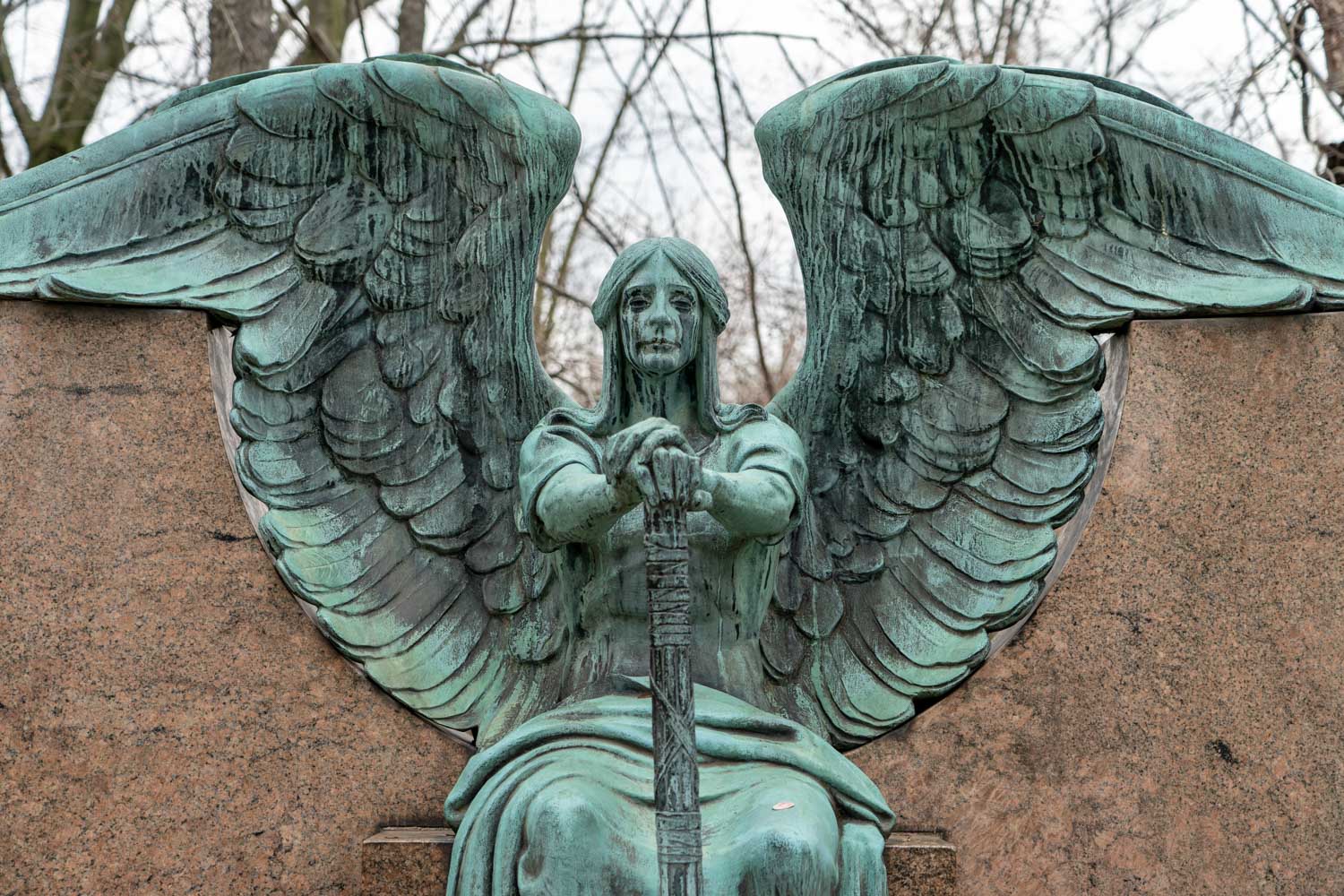 Let me clear something up for you before I dive into this post: yes, I am one of those people who loves cemeteries. I’ve visited old and interesting cemeteries all around the world – from “happy” cemeteries in Romania to Jewish cemeteries in Poland to above-ground cemeteries in New Orleans – and am sure I’ll continue to visit more on my travels.

A good cemetery is not just a place of remembrance, but also a place that exudes peace. There are many cemeteries around the world that are just as beautiful as they are poignant – and I believe that Cleveland’s Lake View Cemetery is one of these.

Lake View Cemetery sits on 285 acres of land on Cleveland’s East side, and dates back to 1869 (meaning the cemetery turns 150 in 2019!). The cemetery was modeled after the Victorian-era garden-style cemeteries of England and France, and is often called “Cleveland’s Outdoor Museum” because of its beautiful landscaping and memorials.

While cemeteries ARE a place where people go to grieve for and remember the dead, you can still visit these places “for fun,” too – as long as you’re respectful about it.

Lake View Cemetery is absolutely a destination in Cleveland, great for taking out-of-town guests, or for exploring through a photographer’s lens. If you’ve never been to Lake View Cemetery before, here are five reasons you should consider visiting, even if you don’t know anyone buried there:

The Neo-Classical Wade Memorial Chapel is a beautiful little building set alongside an ornamental lake in Lake View Cemetery. The chapel was built in 1901 in honor of Jeptha Wade, a Cleveland industrialist who founded Western Union Telegraph.

And while the outside of Wade Chapel is pretty, it’s really the inside that’s the star. The interior of Wade Memorial Chapel was completely designed by Louis Comfort Tiffany – in fact, it’s one of the only remaining Tiffany-designed interiors that still exists.

The interior of Wade Chapel is themed around “The Voyage of Life.” The walls are covered in large glass mosaics, with one wall depicting “The River of Life” and another “The River of Death.” The central piece of the chapel is a large stained glass window titled “The Flight of Souls.”

Fun fact: Wade Chapel has had electricity since the day it opened, making it the first electrified public building in Cleveland.

Wade Chapel was was listed on the National Register of Historic Places in 1973, and is still used for wedding ceremonies and funerals today.

James A. Garfield was the 20th President of the United States. He only served for a few months, though, before being assassinated in 1881.

Garfield and his wife are interred in the James A. Garfield Memorial, a huge 180-foot-tall memorial in the heart of Lake View Cemetery.

It’s one thing to read about it, but another entirely to see this artistry in person.

Visiting the Memorial Hall on the main floor of the memorial is a must, but be sure to also visit the crypt (where Garfield’s casket sits) and the upper level and outdoor balcony that offers up views of Cleveland and Lake Erie.

As I mentioned before, Lake View Cemetery was built in the style of the grand Victorian era cemeteries of Europe. This is reflected in the cemetery’s stunning landscaping.

No matter what time of year you visit Lake View Cemetery, chances are something will be in bloom. In the spring, magnolia trees explode into shades of pink, and white and yellow daffodils open up to cover a section of the cemetery dubbed Daffodil Hill. In the autumn, Japanese maple trees burst into color.

Cleveland was once one of the largest cities in the United States. Because of this, many big names called the city home – some of whom are buried in Lake View Cemetery.

Some interesting graves you can visit include:

The richest man in the world called Cleveland, Ohio, home. In fact, it was here that he founded the Standard Oil Company in 1870. The whole Rockefeller family is buried in Lake View Cemetery. You’ll often find John D. Rockefeller’s grave stone covered in coins – a nod to the fact that he often handed out dimes to children. (Where to find it: Section 10, Lot 49)

Local disc jockey Alan Freed officially coined the term “rock and roll” to describe the new type of music he began playing on the radio in the 1950s. His grave stone is shaped like a jukebox. (Where to find it: Section 5-E)

To Clevelanders, Eliot Ness was the city’s Safety Director from 1935-42. But before he came to Cleveland, he was head of the Prohibition Bureau in Chicago. There, he was famous for his efforts to bring down gangster Al Capone. The story of his life has been retold many times in different versions of his autobiography, The Untouchables. (Where to find it: Section 7, Lot 8)

Harvey Pekar was a comic book writer best known for “American Splendor.” His grave marker has an amusing inscription. It says: “Life is about women, gigs, and bein’ creative.” People often leave pens here in tribute to his work. (Where to find it: Section 7, next to Eliot Ness’ grave)

Another interesting grave to visit is that of Ray Chapman. Chapman was a baseball player who played shortstop for the Cleveland Indians. He died in 1920 after being hit in the head by a pitch in a game against the New York Yankees. He’s the only MLB player to have died from an injury received during a game. His grave stone is always covered in Indians hats, baseball gloves, and sunflower seeds. (Where to find it: Section 42, Lot 16)

Tip: Stop in to the Lake View Cemetery office or Wade Chapel to pick up a cemetery map to make finding all these graves easier.

Lastly, you can spend hours wandering around the different sections of Lake View Cemetery just admiring the sculpture-like headstones and funerary monuments. Lake View Cemetery was largely inspired by the elaborate Victorian cemeteries in Europe, where bigger was better and ornate grave sites were the way to go.

One of the must-see monuments to see in Lake View is the Angel of Death Victorious at the gravesite of the Haserot family (Section 9, Lot 4). Created by sculptor Herman Matzen, the “Haserot Angel” is larger than life and appears to always be “crying” black tears.

Lake View Cemetery is open year-round to visitors. Hours to note are as follows:

There are designated parking areas near the cemetery office and Wade Chapel, but you can also park at the side of just about any road as long as you’re cognizant of cemetery traffic and don’t block roads or park on the grass. If you ride a bike to the cemetery, you’re asked to walk it through the grounds instead of riding it.

READ NEXT: The Most Instagrammable Photo Spots in Cleveland

Have you been to Lake View Cemetery? If not, would you like to visit? 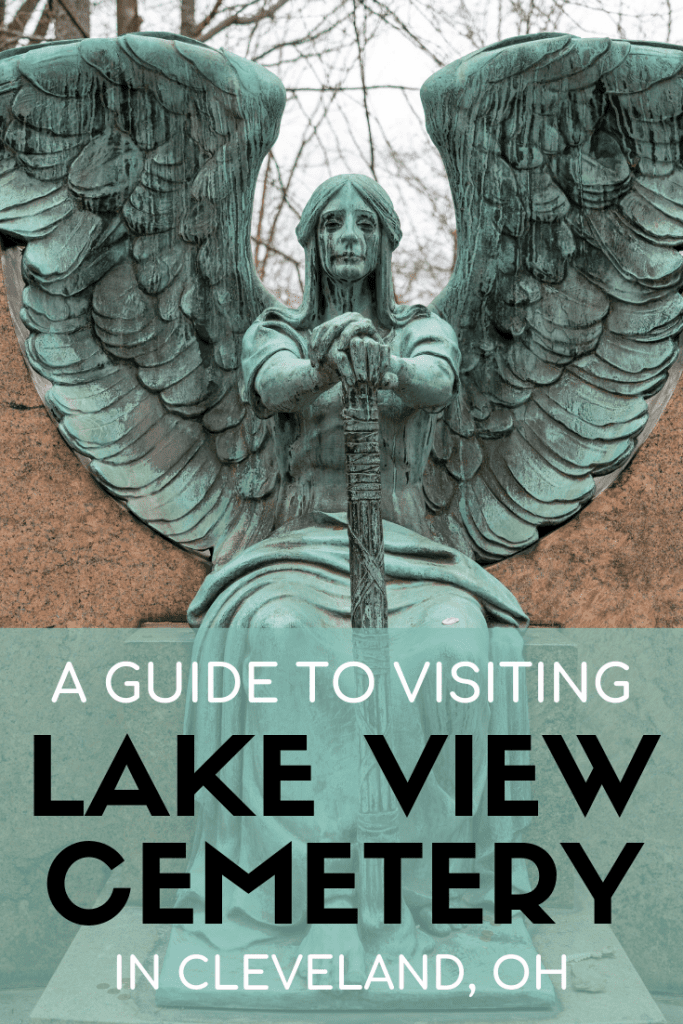